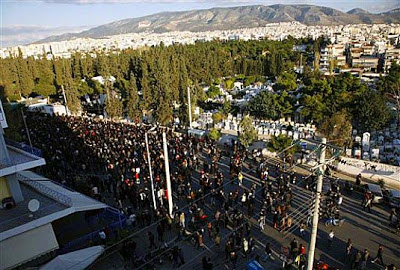 Thousands march at funeral of Greek youth Alexandros Grigoropoulos; demand end to culture of corruption. There’s more to the Greek uprising then the alleged murder of an anarchist youth. Photo by Reuters / AP.

‘A switch has been flicked and the pressure cooker’s boiled over,’ said David Lea, an analyst at Control Risks in London, who compares the riots with those in Parisian suburbs in 2005.

With tear gas and smoke lingering in the air, Spiros Politis stood in front of his Athens drugstore, ready to open after rioters firebombed the building next door.

In the small hours yesterday, the 46-year-old defiantly put out the blaze as youths pelted police with stones and threw Molotov cocktails in some of the worst violence since student rebellions helped topple a military junta in the 1970s.

“Traditions that bound society have deteriorated,” said Politis, owner of Pharmacy Philellinon adjacent to Syntagma Square, a focal point of clashes in the Greek capital following the Dec. 6 police shooting of a 15-year-old boy. “There is no political will to resolve the issues, and I mean political in a greater sense of the whole community.”

The chaos in Athens and Thessaloniki — along with a slowing economy and deepening dissatisfaction with a dynastic political order — is shaking Prime Minister Kostas Karamanlis’s government, which holds a one-vote parliamentary majority. Opposition leader George Papandreou’s Panhellenic Socialist Movement, or Pasok, is leading opinion polls for the first time in eight years.

State workers are planning a national strike today, aiming to bring to a halt cities across the country that are waking up to the prospect of clearing up the debris from more destruction overnight. The workers are protesting Karamanlis-introduced taxes on the self-employed and small businesses aimed at helping meet budget-deficit targets.

“A switch has been flicked and the pressure cooker’s boiled over,” said David Lea, an analyst at Control Risks in London, who compares the riots with those in Parisian suburbs in 2005. “There are certain places where anarchists are more likely to inspire violence, and that’s Greece.”

Behind the riots is anger at an embedded culture of corruption. Greece, which joined the European Union in 1981, is the most corrupt in western Europe and ranks 24th of the 27 EU countries, according to Berlin-based Transparency International’s annual corruption perception index.

“It’s a plague on both houses,” said Professor Kevin Featherstone, director of the Hellenic Observatory at the London School of Economics. “It’s a sense of frustration. How do you change a system that has corruption so deeply embedded?”

This month, an all-party parliamentary committee will say whether any lawmakers have been involved in a corruption scandal involving a land swap with a monastery that left taxpayers 100 million euros ($130 million) poorer.

Both New Democracy and Pasok are struggling to keep a lid on the increasingly angry youth population. The unemployment rate for the 15 to 24 age group was 19 percent in August, according to the latest figures from the National Statistics Service in Athens. That’s the highest percentage among all age groups, the statistics show.

The overall jobless rate was 7.2 percent in June, while the economy is growing at an annual rate of about 3 percent, according to national statistics.

Rioters fire-bombed stores in Athens and Thessaloniki, the country’s second-largest city, and threw rubble at police for a fourth day following the death of Alexis Grigoropoulos in an Athens suburb.

Police said 87 people were arrested in Athens for attacking officers, vandalism and looting. A total of 176 people were detained while 12 police were injured, police said. Mega TV reported that total arrests in Greece reached 157. Violence erupted again after the boy’s funeral yesterday in the capital.

Pavlos, who asked for his last name not be used because of fear of arrest, was among the crowd of black-clad hooded youths cheering when flames licked the three-meter high Christmas tree in Athens’s central Syntagma Square on Dec. 8.

“This isn’t violence, this is destruction,” said Pavlos, 20, who studied hotel management in the Greek capital. “The trigger was the death of the kid, but the reasons are much deeper. Consumerism, the police, the government, the way the state functions. There are no opportunities.”

Grigoropoulos was killed after a group of about 30 teenagers attacked a patrol car with projectiles in the Exarhia district of Athens, according to the Interior Ministry.

The area is adjacent to the National Technical University of Athens, the site of the 1973 student uprising against the military junta. Now the rioters, many in their teens, are hooked up via the Internet and mobile-phone text messages.

The government is promising a quick investigation into the circumstances of the shooting but Politis, the pharmacy owner, said politicians need to go beyond just finding out what happened that night in Athens.

“How do you fix it? How does the government pay for it like they say they will?” he said. “Christmas is over.”