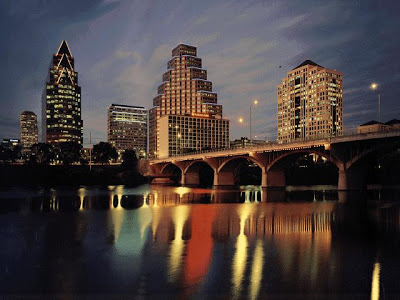 Still, these Texas numbers look like boutique novelties in a warehouse of national economic crisis.

It’s a wistful headline, I admit. But it covers a considerable hope.

The Austin-Round Rock metropolitan area was nearly alone among USA cities for its ability to report year-over-year job growth in April, 2009 (up by 3,400 jobs). And it was the only major metro area (out of 38) to report an increase in the employment rate (+0.4 percent). To believe that this slim green shoot is the first sign of economic Springtime in America requires a bit of the Oat Willie determination to go “Onward thru the Fog.” Which, actually, is what I intend to do.

But first a note: more notice should have been given to Odessa-Midland which, unlike Austin-Round Rock, gets split into two separate metro areas. Odessa employment was up by 1,800 over the year, while Midland was up by 1,500. Why these sister cities don’t get hyphenated into a single metro is curious.

How all these jobs will get re-started is not easy to see. Where are the new paradigms of labor to come from?

Stock watchers are reading reports about large dollar supplies stored up by investment managers and standing ready to flow back into a wary market of stocks and bonds as soon as things get more steady. But the dynamic reminds me of Truman’s exhortations on fear. Don’t things continue to fall harder the longer the investment managers wait?

In some circles one hears a constant drumbeat for buying gold, which may be a way to own something that won’t crash in value this year. But what use is gold, really?

In the great classic of American political economy, Progress and Poverty, Henry George defines capital as that part of wealth which is put back into productive use. He encourages a view of capital as something which enables labor to be more productive and he therefore discourages taxation on capital.

Taking a Georgist view, I would think that gold is wealth that serves very little productive purpose. To the extent that gold is a way of holding some savings for retirement or rainy days, I don’t see how it should be valued much differently than any other form of savings.

But to the extent that gold is hoarded up as a pile of fear, doesn’t it become its own effect, pulling wealth out of productive equity investments, drying up more jobs, etc.?

From my armchair view of internet chatter, it seems to me a wise thing for policy makers to devalue the dollar in the near-term as a means of coaxing cash into markets. But if devalued dollars simply get transmuted into gold shares, then the alchemy gets dark.

A Georgist approach to systemic reform begins with tax policy. Capital and labor should be taxed last. Then property values should be clearly divided between improvements and the land they rest upon. Let the improvements also move to the back of the tax line. This leaves land value at the head of the line for taxation.

George’s reasons for land tax could be summed up in a Kudlow motto: “tax it and you get less of it.” But with land, there is no danger of taxation reducing the supply, there is only the promise of land monopolists unloading every acre that they are not already putting to productive purpose.

Thus, under the Georgist model, the land tax — as the only tax — could never result in an absolute decrease in land supply. The land tax would only tend to decrease the amount of land that is held, like piles of gold, for unproductive use. As for gold and other means of piling up unproductive wealth, I can’t see right away why a tax on such things wouldn’t hasten the development of a more productive economy for all.

George says that supply and demand are misleading terms to use when trying to understand the causes of the unemployment cycle. Workers are not quitting their jobs because they have earned all they need. They are not refusing to produce or to consume. We never have all we want, and the example of Austin in April proves that we are ever willing to earn the next leg up. So why do so many workers find themselves at massive rates closed out of productive opportunity?

The problem lies at the door of unproductive wealth, because there is still plenty of it. Yet for some reason unproductive wealth is encouraged and allowed to pile up, even sometimes as an excuse for “real value.” If we taxed land, unproductive wealth, and gold supplies, I wonder, wouldn’t we quickly motivate and incentivize tons of wealth into capital that would eagerly call for full employment now?

[Greg Moses is editor of TexasWorker.Org. He is a regular contributor to The Rag Blog.]

This entry was posted in Rag Bloggers and tagged Austin, Economic Recovery, Texas. Bookmark the permalink.