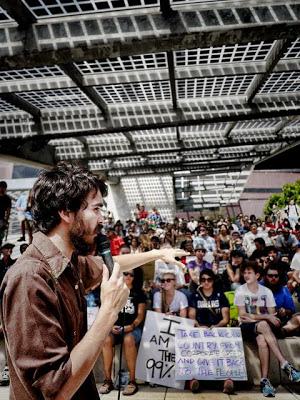 As Occupy Austin entered its second week, organizers were looking more rested, wholesome, happy, and relaxed as they mixed themselves into the festival of people…

AUSTIN — For Bernice King the timing of things must be spiritual. There must have been a reason she says for Hurricane Irene to move in on the August schedule and force a delay to October so that when the monument to her father was officially unveiled Sunday, it would be presented to a nation properly prepared.

Occupying the only memorial on the National Mall not dedicated to a president or a war, the stone-hewn image of our beloved American prophet transfixes our national conscience upon renewed possibilities. Tourists banned from the Washington monument due to earthquake damage will be compelled more than ever to stop looking at where we came from and go find out where we’re going.

The weather in Texas also had been holding out. Sunny skies greeted the opening-day festival for Occupy Austin on Thursday, October 6, and stayed for the sidewalk picket of Bank of America that Friday. When the storms finally hit Austin on the second Saturday of October they broke the harshest season of heat and drought on record, pouring down their pent-up refreshments all over the first weekend of Occupy Austin.

It wasn’t an easy night for Occupy Austin organizers who showed up to the matinee edition of Sunday’s General Assembly with fatigue and desperation barely contained. What they needed was unity right away. But the thing about real organizing work is that you don’t get what you need when you think you need it most. And so you learn in real time how to stretch yourself across an abyss because somehow it still seems easier than falling apart.

What was most interesting about the first stormy weekend of Occupy Austin had to do with the issue that churned this predominantly white movement nearly to early dissipation. It was the issue of the indigenous peoples and what any real economic justice movement should do about that?

Although the Occupy Austin General Assembly had passed a resolution in support of indigenous peoples on that stormy first Saturday, it was an expensive lesson in the deep-rootedness of all problems American. And for weary organizers who showed up for Sunday’s aftermath, there was a real fear expressed that the occupation might have already seen its last hour.

So it wasn’t an easy meeting up at the City Hall amphitheater, where the west-side railings were still wrapped in black plastic as an improv windbreak. But eventually things worked out. A set of Unity Principles was adopted that would keep the compass of Occupy Austin fixed upon its “true North” purpose as an action guided by the example of Occupy Wall Street.

On Columbus Day, a banking holiday in America, the indigenous movement staged a symbolic protest outside Bank of America and then rallied at the Texas Capitol against a half millennium of occupation. On the Saturday after Columbus Day, the 9th Annual Indigenous People’s march stepped off from the Alamo, joined by folks from Occupy San Antonio.

Meanwhile city officials from Austin to New York were working out their own unity principles, and their word of the week was “sanitation.” On Wall Street the sanitation issue became international news and city officials backed down from their ultimatum that the occupied park should be cleared for proper cleaning. In Austin a few arrests were reported during the sanitation action, but the movement was too young and sparse to make much of an issue out of it.

As Occupy Austin entered its second week this past Friday, October 14, organizers were looking more rested, wholesome, happy, and relaxed as they mixed themselves into the festival of people that array themselves around the Guitar Cow at City Hall Plaza. On my third visit to the occupation I still count more than 100 participants, about 40 of them beginning to look like regulars.

Folks sit up in the amphitheater, hold signs along Cesar Chavez St., mill about the stone plaza, or arrange themselves into small groups on the limited grassy area near Lavaca St. Huddled up against the East side of the amphitheater is another tiny patch of grass that supports knee-high stone blocks. This is where some of the more “official” occupation activities take place, like a food table, an info table, or a small organizing meeting.

On the second Friday of the occupation around 5:30 p.m. about a dozen mostly young folks are discussing strategies of nonviolent communication. This is a survival skill for the occupation movement as any casual visitor to a General Assembly will see. Either this movement will be able to organize itself through group discussions or it will fall apart.

And this is worth remarking in our age of social media. What all the Facebook, cell phone, text message, and Twitter technology has created here is an electrifying need for face-to-face solidarity. 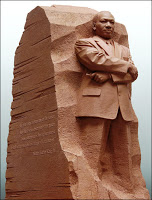 Among the dozen participants who hold handouts at this nonviolence workshop, you don’t hear the usual questions such as what’s nonviolent communication got to do with me? Instead you hear voices who are up to their necks in the need for this skill, and you listen to questions eager to understand how it works.

Just as I’m catching the flow of discussion about the distinction between a request and a demand, up comes a visitor to the occupation who wants to know if we are anti-corporation.

A young man who I recognize as an organizer points to the sky in a gesture that appears to signal something like hey dude that’s not what we’re here to discuss, but one of the facilitators of this workshop checks him with a glance before addressing the questioner.

“How does it make you feel when you hear the words anti-corporation?”

“When you think about the corporations that you are familiar with, do you think of them as addressing the kinds of problems that we are here to solve?”

No. Clearly our questioner has a lot of corporate experience and he shares with us his mental checklist. One by one, we listen to him tell us how none of the corporations that he knows personally could be counted on to join this movement for economic justice. They all have something else in mind.

“I grew up with nonviolence,” says the questioner, a remark that sort of calls attention to his Black skin.

“Nonviolence?” says a white guy who is walking his bicycle through the occupation. “How far are you willing to take that?”

“The question sounds vague to me,” says the second facilitator. “Can you make it more clear?”

“I mean how would you respond if someone was doing violence to you?”

“With compassion,” answers the second facilitator introducing a longer answer that involves Gandhi and some core principles of self-protection.

Soon enough we’re back into the flow of our workshop on nonviolent communication and very pleased to have such handy examples to think about.

Out on the plaza a three-piece band is putting out a vibe. The keyboards hit at the opening chords of “Higher Ground” and soon enough the keyboardist is singing, “People!”

It feels good to see the organizers smiling and chatting casually during this Friday evening festival. The skin that seemed so drained last weekend has come back flush with life. They’ve had a chance to shower and rest and eat and get to know each other a little better.

Back on stage the guitar player strikes a few hard chords and asks us to sing along if we’d like.

“Once upon a time, you dressed so fine…”

And suddenly it’s like people don’t walk past each other any more, but everybody checks out everybody else’s eyes just to make sure they’re sharing the feeling. The keyboardist and bass player dig into their notes. And everything is suddenly new all over again.