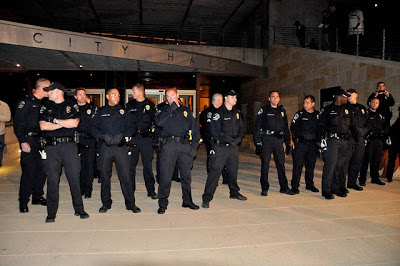 Police in Austin, Texas, made 39 arrests early Sunday as they moved to enforce a new rule banning food tables in the City Hall plaza where protesters have camped out. Some protesters surrounded the tables with arms linked. Most were charged with criminal trespass, Police Chief Art Acevedo said. No injuries were reported.

Protesters had been advised of the food table ban on Friday, Assistant City Manager Michael McDonald told the Austin American-Statesman.“We want to facilitate their activities,” he said, “but we can’t allow this to be a permanent campsite.”

Some protesters found the ban arbitrary. “On a night where there are hundreds of drunks driving around town, they have all these resources here to take down three food tables,” protester Dave Cortez told the newspaper. — Salon / AP

If last Friday you could pull yourself from the temptation of ordering a $17 risotto among jam-packed downtown luncheoneers, then you could walk a little further to the west side of Austin City Hall and catch a free viewing of the noon sun as it stopped to warm a heap of oversized sleeping bags right outside the picture window of city council chambers.

Probably the architect who west-walled the council room in glass was suggesting something about democracy, so you wondered for a minute how that impromptu pile of cozy bedding looked from inside and how long the sight would be tolerated. Out on the west plaza meanwhile a well-bred dog concentrated on the art of warming, stretching its front legs out in such a way as to flatten its tummy across the sun-stained stone, stretching, and coughing just a little bit.

Of course it sounds too perfect that the only other thing you heard was the quiet melody of guitar strings being finger-picked by a youngish man whose presence, style, and musicality seemed to account for the dog’s single-minded attention to relaxation.

Now at what point exactly on this fourth weekend of Occupy Austin did the Austin Police swoop down to scoop up all these sleeping bags and dump them at some pre-authorized location? By Sunday afternoon a shoeless young woman will be trying to explain it all, pointing to her feet and saying yes, that’s why she has no shoes, because they were lost in the sleeping bag raid.

And sure enough on Sunday afternoon when you walk back around to check out the view near “democracy window” there is nothing but bare stone.

Rounding the corner to the south plaza on Friday, you saw a dozen folks sitting in various places upon the amphitheater to your upper left and another dozen people gathered in the plaza before you. Beyond the plaza, and around the sidewalks, perhaps another dozen sat, walked, or stood. Three dozen in all, up, down, and around.

A shirtless man with a bicycle mocked you on Friday for gaping at the scene, then turned his attention to two middle aged men with really cool bikes who were also just looking at things.

Where the east steps of the amphitheater met the plaza was an empty metal bookshelf labeled “Free Library,” not too far from a line-up of books sunning themselves on a warm block of stone. Sitting also on the stone was a young woman deep into the art of making a sign from poster-board and magic marker.

“The police took the bookshelf, too,” explains the barefoot woman on Sunday. “I think they called it a permanent fixture.” 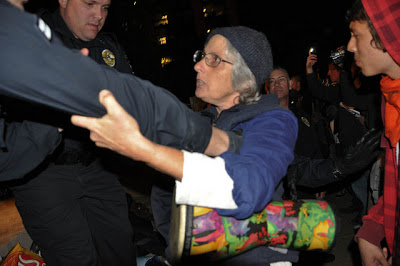 Austin police arrest demonstrator at City Hall, Oct. 29, 2011. Photo by Ann Harkness / Flickr.
On Friday also you recall making notes about the food table that was serving free lunch on the lower deck of the amphitheater. “Mom’s Work” said a sign behind the table as food was being served by a healthy looking blonde.

“They didn’t come for the food table until midnight Saturday,” the barefoot woman explains on Sunday. “There was a new rule about no food from 10 pm to 6 am, so we were kinda giddy about it when they didn’t come for the table at 10. But the rule didn’t go into effect until Sunday, so that’s why they waited.”

Although the food-table arrests were not the first arrests for Occupy Austin, they were the first to be met with a unified and organized response. As the barefoot woman was informing me on Sunday about the overnight arrests, she wondered how she was going to march barefooted from city hall to the county jail.

Thinking back on Friday, you got the impression that the occupation camp was mostly glowing on the question of police relations. The Austin Police Chief had come to Thursday night’s General Assembly with some encouraging words and promises. Folks were chatting Friday about how Austin was an exception to the police attacks that had rocked other occupations.

Not that police had been exactly kindly up to the fourth weekend of Occupy Austin. For example, the “flag man” of the movement who wore a Veteran’s Administration tag around his neck and who camped out near the front sidewalk with an American flag said the cops warned him once that if he put his head down to sleep they would arrest him. After 36 hours of sleepless occupation he walked several miles to the VA facility before he felt safe enough to close his eyes.

After the food-table take-down, the police came back.

“Oh I don’t remember exactly what time it was, maybe between two and four in the morning,” says a trusted witness.

“One group of cops lined up at the top of the amphitheater.”

“No, there were two lines of cops at the top of the amphitheater,” says a friend.

“And they had another line of cops over there,” says the trusted witness, pointing to the sidewalk along the east side of the city hall plaza.

The cops swept southward down the amphitheater and westward across the plaza.

“It was ridiculous, because we have been moving to that side two or three times a week so that they could power-wash the plaza and amphitheater,” chimes in the friend. “Then last night they also changed the order of the power washing. Usually they wash the amphitheater first so that it has a chance to dry first and we can go back to sleep. But last night they washed the amphitheater last and we had the feeling they did it on purpose so that we would have wet spaces to sleep on.”

By the time the police intimidations were over with, nearly 40 people had been arrested. They were being bailed out all day Sunday, and at 4 pm it was time to redouble the support group that was assembled at the door of the county jail.

After a brief double-check via an iPhone map, organizers led 60 marchers north, up Guadalupe, from city hall to the county jail. Our barefooted marcher carried a sign taller than her that read: “Unless someone like you cares a whole awful lot, nothing’s going to get better, it’s not.” Signed by, “The Lorax.” Next time I will see her, she will be educating a television reporter who doesn’t appear shoeless to me.

“Shame on APD, Occupiers must go free!” chant some 60 marchers as they step past prime retailers and polished tour buses. “It’s the War Economy,” declares one protest sign as marchers pass a couple of banks. Small cars honk friendly notes as they pass us going south. Then as the last stragglers of the march finish crossing Fifth Street a big white gas-guzzling combo SUV pickup monstrosity lays on its horn and gas at the same time, nearly threatening to run ‘em down.

After marchers pass the John Henry Faulk city library and take a turn around Wooldridge Park, they are greeted with cheers from the branch occupation at the county jail. The merged rally is easily 150 strong. In this hour of triumph, the arrests themselves have energized the movement to a new plateau of solidarity and determination.

The Bail and Jail Magnet for the occupation announces that $400 has just been posted for two more releases, a third release is pending after that, and a supporter has donated pizza! Boxes of pizza are stacked five high on a bench.

“What happens when people violate your constitutional rights?” asks an organizer. “Do they get arrested?”

“They get elected!” answers a backbencher, cackling.

At that point the door to the county jail opens up and out come three jail trustees in blue scrubs, walking a dog, supervised by a uniformed deputy. The four of them take the dog to a grassy patch where he knows just what to do.

Two television crews break down and return home. A third crew arrives with a satellite truck. The air is swooning with the smell of hand-rolled tobacco. 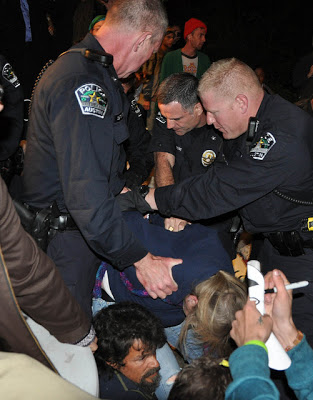 Arrests accompany police shutdown of food table at Occupy Austin. Photo by Ann Harkness / Flickr.
Then we see our first liberation. Out from the glass doors of the jail strides a young man of stocky build, green t-shirt, desert camo pants, black bandana tied around his neck, and topped with a broad, flat Mohawk. He looks good to us, and you can tell we look good to him. He saunters toward the back benches where the jail veterans are sharing stories. Someone passes him a Coke.

Another stocky young man about this time is talking to the live stream about getting in and out of jail. Inside, they told him there were too many people in jail. He said he told them that’s an easy problem to fix. Just let the folks who didn’t do anything out.

When organizers report three more arrests back at city hall, I walk south to check it out. At Wooldridge Park, three women have set up a table to give food, socks, undershorts, and t-shirts to a line that is already 60 men long. A man is asking for extra socks that he can give to his girlfriend. Down 9th St. near the Hirshfeld-Moore House I catch the back end of a Zombie march. Then it’s past the Texas Observer on 7th, under the porch at Betsy’s Bar, and down a stretch of Lavaca that stinks like puke and grease. At an upscale hotel, valets are lining up a Prius, an Audi, and a BMW.

“Yes, two guys got arrested here about ten minutes ago,” is what I hear from several people back at city hall. “They were fighting. Then while they were being arrested, another guy kept talking to the cops and wouldn’t shut up, so they arrested him too.”

It’s close to 6 pm Sunday and the fourth weekend of Occupy Austin is coming to a close. The last jail release won’t be live streamed until 9:22 pm. Meanwhile Bob Jensen is leading a few folks to the West side of city hall for a teach-in on toxic economics.

Occupiers on the plaza are already debating the meaning of today’s arrests and planning further actions to seek divestment of the city from Bank of America. Everybody is thinking about the next move.