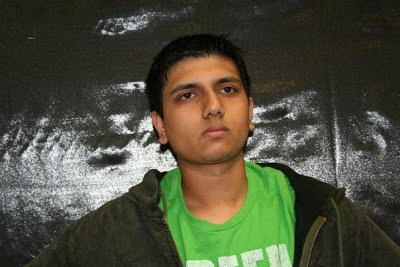 Saad Nabeel: An education interrupted.
The sophomore who isn’t:
How Saad Nabeel’s freshman year got ICE’d

As the 2009 graduates of Liberty High School in Frisco, Texas begin their sophomore year of college under new stresses of time and study, they do not forget that their classmate Saad Nabeel never got to finish the first semester of his freshman year. And Nabeel’s immigration advocate Ralph Isenberg says the young man’s abrupt deportation last year was so unfair and illegal that he should be immediately restored to his college career in the USA.

Thanks to Nabeel’s energetic internet campaign seeking return to his American homeland, the young man’s deportation has been covered by reporters in Texas, Germany, and India. His open letter to President Barack Obama was recently published at The Huffington Post.

Pinak Joshi is one of Nabeel’s best friends and was able to take calls during some of the cruelest days of detention last year. Joshi is a sophomore in molecular biology at the University of Wisconsin-Madison, where he is already doing independent experimentation on prostate cancer.

“Although I’m proud of all that I do, it is a very strenuous weight to hold at the age of 19,” says Joshi via email. “What happened to Saad showed me that this is a privileged kind of stress. Being a sophomore in college has changed how I look at the world. Thanks to my research experience and coursework, I’m more thorough with my responsibilities and I’m able to think about complex problems analytically.”

“Saad is missing out on all that,” says Joshi. “He’s missing out on the ridiculous volume of math problems he would get as an engineer. He’s missing the laughs, the good times, and the beauty that is in the struggle of leading a scholarly life. He’s missing out on making new friends and building a network that could help him in the future. Most of all, he has been denied the opportunity to pursue his dreams.”

At the College Station campus of Texas A&M University, another close friend of Nabeel, sophomore engineering student Chris Anderson, finds himself already caught up in three-day bouts of homework and tests.

“Being a sophomore in college is more than just a title of what age I am,” says Anderson, “it means that I was able to make it through a whole year on my own. Being able to manage a tough engineering curriculum while still having time to do other activities has helped teach me how to prioritize and manage my time better. If I hadn’t had these skills coming into my sophomore year then I would be behind and struggling in my classes.”

“When Saad’s first semester of his Freshman year of college was disrupted he lost not only his grades which he spent so much time and effort to keep up, but he also lost the whole Freshman experience and the ability to prove himself as an independent person,” says Anderson. “College is about more than just getting a degree, it’s about learning to grow as a person and getting that life experience, but because our government decided to deport him and interrupt his education he is missing a year of his life that he will never get back.”

In Bangladesh, Nabeel struggles with living conditions quite different from the college apartments that he enjoyed last year while attending the University of Texas at Arlington on full scholarship for engineering.

“It is very hot and humid here,” says Nabeel in a draft script that he is preparing for an update to his YouTube page. “The temperature is constantly above 100 degrees outside. The apartment I live in has no air conditioning. To make matters worse, the electricity stays off for upwards of nine hours a day. Then there is the pollution. The air can make you sick here and some days I can barely get out of bed. I have also suffered several bouts of food poisoning. I hope you can better understand why I am so anxious to get home. Bangladesh is not home but rather a nightmare that I hope soon ends.”

To get his American dream back on track, Nabeel has been working with Dallas businessman and immigration advocate Ralph Isenberg. After a recent review of Nabeel’s case, Isenberg is arguing that U.S. immigration authorities contradicted themselves when they first separated Nabeel from his mother and then failed to treat him as an unaccompanied minor.

On Isenberg’s reading, immigration law defines minors as younger than 21. Therefore, when Nabeel at age 18 was separated from his mother, immigration authorities should have transferred him to Health and Human Services (HHS), where he would have been entitled to education and legal representation, both denied to him under supervision of Immigration and Customs Enforcement (ICE).

“Saad’s detention was unlawful and ICE knew it,” says Isenberg via telephone. “Immigration law defines a minor as 21 years old or less. And there are two types of minors, accompanied and unaccompanied. Saad coming to America at age three was clearly an accompanied minor the whole time.”

ICE authorities in New York separated Nabeel from his mother on the day before Thanksgiving, 2009. ICE then detained the 18-year-old in an adult facility and refused the young man’s requests to communicate with his parents who were both under ICE detention. ICE could have allowed communication between the young man and his parents. They could have transferred the younger Nabeel to detention with his father in Haskell, Texas. Or they could have released the 18-year-old to the care of his uncle in New York.

At no point during their 15-year immigration saga in America were the Nabeel family “illegal,” explains the younger Nabeel in his upcoming YouTube video. They arrived with visas in 1994 and were very close to finalizing Green Cards in 2009. It was not the application of immigration law that forced the family to Bangladesh in 2010, but the misapplication of law by authorities who misused their powers.

“There is no gray area in the law,” explains Isenberg. “Unaccompanied minors must be handed over to HHS. ICE knew it, but refused to do that. They took a minor and put him into an adult detention facility without protections of law that minors are entitled to. There are halfway houses for unaccompanied minors. HHS has definitive responsibilities to provide education and social services. Saad was denied all that.

“When Saad asked for help he was called a security risk. ICE not only could have but should have paroled Saad to his uncle,” says Isenberg. “I dare say had that happened he would have never been deported. ICE broke the law by ignoring Saad’s request for political asylum while detained. They broke the law, put him in jail, threw away the key, put him on the plane, and there was no due process whatsoever.” 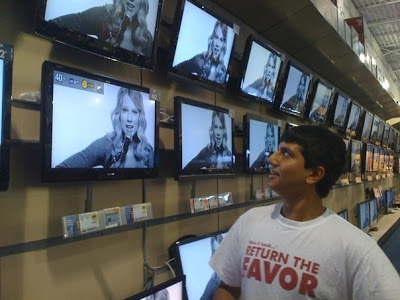 Saad Nabeel and Taylor Swift, in better times.
On a sweltering day in late August Nabeel received an email with a link to the just-released Taylor Swift video. When he clicked on the link he was informed that the video was not available for viewing in the Bangladesh region.

“It sucks,” he emailed, “because I had tickets to her concert twice but couldn’t go because my parents said, ‘we don’t know if immigration will extend our time that long.’” The family was living lawfully and obediently according to the directions that ICE had communicated. What else could keep the young Nabeel from twice buying his Taylor Swift tickets in advance?

Of course, eight hours after the first email a second one arrived from the computer saavy Nabeel. In all caps it read “just watched it, greatest music video ever!” How do you get to be more of an American kid than that?