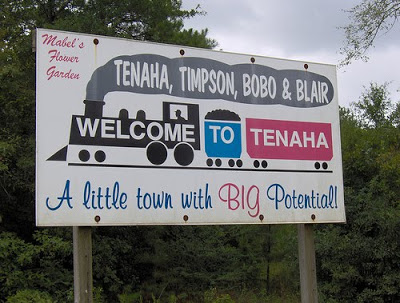 Welcome to Tenaha! Photo by Exquisitely Bored in Nacogdoches / Flickr.
Bizarre License on Highway 59:
The Cash Cops of Tenaha

It was Friday of the last day of August, 2007 when Arkansas resident James Morrow attempted to mind his own business while driving peaceably through Tenaha, a small East Texas town in Shelby County south of Shreveport and Longview.

According to a federal lawsuit (Morrow v Tenaha) filed by attorneys Tim Garrigan and David Guillory, there was “no legal justification” for what happened next. Morrow was stopped by Tenaha Deputy Marshall Barry Washington and asked to step out of his car. Deputy Washington then searched Morrow’s car.

Then Deputy Washington was joined at the scene by Shelby County Precinct Four Constable Randy Whatley who searched the car with a dog.

Following two searches of his car, Morrow was asked by Deputy Washington if he had any money, and he said yes, he was carrying about $3,900 in his wallet. Deputy Washington promptly seized $3,969 from Morrow, confiscated his two cell phones, and arrested him for “money laundering.”

Morrow is a black African American and the lead plaintiff in a case involving eight motorists who claim they were stopped and stripped of their cash for no other provocation than driving or riding through Tenaha while black. The cars they all drove were either rented or displayed out-of-state license plates.

On August 13, 2007, Deputy Washington lifted $50,291.00 from two black African Americans from Washington D.C. and Maryland who were traveling through Texas together.

“Washington threatened Plaintiffs with charges of money laundering and lengthy sentences if they would not execute documents allowing the seizure or if they otherwise contested the seizure,” says the lawsuit. “Washington did not charge Plaintiffs with any criminal offense, nor did he have legal justification to do so.”

On June 11, 2008, Deputy Washington confiscated $13,000 from a black African American from Wisconsin.

“Washington threatened to bring money laundering charges against Plaintiff, and to prosecute him on those charges, if he did not execute documents permitting Defendant Washington’s seizure and forfeiture of the money,” says the lawsuit. “Under this coercion, Plaintiff signed the documents.”

On April 18, 2007, Deputy Washington stopped and detained another pair of black African American motorists, Linda Dorman and Marvin Pearson, both from Ohio. While under detention they were questioned by Shelby County District Attorney Investigator Danny Green. He asked them if they had any money. According to court documents Dorman and Pearson admitted to having $4,500, but after Green confiscated the cash under the usual coercive threats, he handed them a receipt for only $4,000. No charges against Dorman or Pearson were ever filed.

Jennifer Boatwright is a white woman from Texas, but on April 26, 2007 she was driving down Highway 59 near Tenaha with Ronald Henderson, a black African American. They were stopped and detained by Deputy Washington, then questioned by Washington and D.A. Investigator Green.

“Now, under Texas law, if you are pulled over and accused of a real crime, police are permitted to take money and other valuables that you might have used in your crime, or received from your crime,” explains CNN correspondent Gary Tuchman in a May, 2009 blog post at AC360.

As Tuchman explains, the forfeiture law is intended to take bad money and put it to good use, but after an extensive public information request, the CNN team discovered that District Attorney Lynda K. Russell has collected an estimated $3 million in forfeiture funds to purchase such things as $195 for Tootsie Pops, Dum Dums, and Dubble Bubble that she contributed to a poultry festival, $524 for a popcorn machine and popcorn, $400 for barbecue catering, and at least two checks totaling $6,000 to a local Baptist church.

“But this one, this check, really stands out,” reports Tuchman in an archived transcript of the story. “This is the check the DA wrote for $10,000 and paid directly to police officer Barry Washington for what are described as investigative costs.”

With camera rolling, Tuchman asks Russell and Washington for comments, but they both refuse on account of pending litigation. In federal court documents the defendants deny the charges, claim to have no knowledge of alleged facts, claim immunity as officials, and ask that the case be dismissed.

Republican D.A. Russell was elected by 53 percent of the vote against a Democrat opponent in 2000, according to official numbers posted by the Texas Secretary of State. In 2004 she increased her general election share to 59 percent against her predecessor, Democrat Karen S. Price, who tried to stage a comeback after a failed effort to get elected in 2000 as a Republican District Judge. In 2008, D.A. Russell ran unopposed. No one that year could have made a campaign issue of the federal suit that was filed after the spring primary but before the fall general election.

On the defense side, attorneys argued that they should be allowed to discover “travel itineraries, calendars, journals, or other documents reflecting schedule and/or any travel; all credit card bills/receipts; all receipts for hotel, gas, meals, rental cars; and photographs from any trips and of any items seized.” Judge Ward agreed, but only if the records were “readily available.”

Lawyers for the police and D.A.’s office also wanted plaintiffs to turn over bank records, income tax returns, and employment records; in an apparent attempt to revisit the “money laundering” charges that were never filed in the first place. It was a scary request supported by scary argumentation:

“In other words,” argued lawyers for the Shelby County law enforcement establishment in their federal filings, “even if the initial traffic stop lacked probable cause, the forfeiture action could proceed and the State could still meet its civil case burden of proof by a preponderance of the evidence and the property could still be forfeited.”

The authority the cops were seeking was chilling. They could stop people for no reason, take their cash, spend it, meanwhile filing no charges of wrongdoing. All the while, the authorities of East Texas or wherever could count on a federal court order that would allow them to go after the banking, tax, and employment records of their innocent victims if they tried to get their money back. Judge Ward denied those parts of discovery.

The discovery motions also revealed that collection accounts were not always well kept. One front-line collector argued that he kept bulk numbers only and could not provide evidence of how much money was taken on any single occasion. To get your money back from these actors, they may demand that you prove it’s not contraband and then prove how much they took.

But these East Texas law enforcers are not finished grasping at bizarre license to ply their trade as the cash cops of Highway 59. D.A. Russell now seeks to use the forfeiture funds to pay for her defense. In early October the ACLU filed a brief with the Texas Attorney General’s Office to prevent the forfeiture funds from being spent to defend alleged abuse of forfeiture powers.

“Even if it were determined that, under other circumstances, the District Attorney should be permitted to use forfeited assets to pay for legal representation, such an action in this case should be prohibited because it would give the appearance of impropriety,” argues the ACLU brief.

“The Plaintiffs claim the funds were taken illegally. To permit the District Attorney to use them would suggest that law-breakers may profit from ill-gotten gains, the very problem that the asset forfeiture law was created to prevent.”

Cash is a lucrative temptation. Empowering officials to take cash money from passing motorists and give it to attorneys who can help them keep it is a plain recipe for placing law enforcement powers in the hands of highway forfeiture gangs.

[Greg Moses is editor of the Texas Civil Rights Review, author of Revolution of Conscience: Martin Luther King, Jr. and the Philosophy of Nonviolence, and a card carrying member of the ACLU. He can be reached at gmosesx@gmail.com.]

8 Responses to Greg Moses : The Cash Cops of Tenaha, Texas