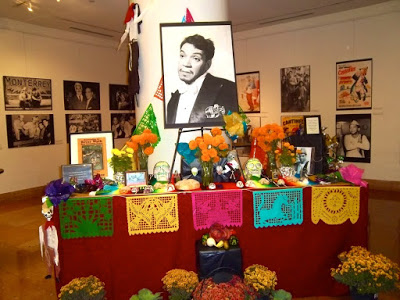 SAN ANTONIO — On a recent afternoon in San Antonio’s Market Square, a German tourist asked one of the vendors for a uniquely Mexican souvenir. After pointing to a plethora of Aztec calendars and rebozos, the vendor produced a ceramic Cantinflas.

“Es muy mexicano, es único,” she said. Behind her, a display shelf held dozens of Cantinflas figures depicting roles that had made the actor famous. A short legend was inscribed below the figure of Cantinflas as a doctor: “I’ll cure you of whatever ails you.” The tone in español is almost picaresque.

The tourist asked if the shopkeeper had statues of other national heroes.

The German took the Cantinflas.

This year marks the 101st anniversary of the beloved comic’s birth, and appropriately the San Antonio Public Library, KLRN and the San Antonio Public Library Foundation celebrated Latino Heritage Month with a long overdue Cantinflas retrospective. In addition to an exhibit of film posters and photos that span his life and times, local library branches screened the lion’s share of his 50-plus films.

Known for his “little tramp” outfit of patched, baggy pants, rope belt, tattered vest, straw hat, and a slim mustache, Cantinflas personified the Mexican “peladito,” an everyman. His use of convoluted, hilarious wordplay was later aped by Abbott and Costello in their “Who’s on First?” routine, and on TV by Professor Erwin Corey, an Anglo legacy that hints at the impact this Mexican comic genius had on Spanish-speaking audiences around the world.

Film purists still insist that Hollywood’s golden age of comedy ended with the talkies. And although Spanish-speaking audiences enjoyed the slapstick comics of Hollywood, their interest waned as movies began to speak in English. That’s when the Mexican film industry took off.

Its most successful star was Mario Moreno, aka Cantinflas. His slight build was perfect for the screen, and fame came quickly, starting with Está es mi tierra (This is My Country) in 1937. His most famous films dealt with the everyday life of a penniless vagabond, el peladito — not unlike Chaplin’s Little Tramp– who wore his pants lower than even today’s hip-hop standards might allow.

Both comics had worked in the circus and vaudeville and began their film careers in one-reel comedies. After a Los Angeles screening of Cantinflas’ Ni sangre ni arena (Neither Blood Nor Sand), Chaplin called Cantinflas the best living comic in the world. That film’s daring and hilarious bullfighting sequences are especially impressive because Moreno, an amateur bullfighter, did his own stunts.

But Cantinflas was so much more than a physical comedian. There was a method to the madness of his Spanish-language double entendres and verbal nonsense. He befuddled and jabbed at politicians, diplomats, lawmen, and the wealthy in his films. His brand of humor spread like wildfire, so much so that the Real Academia Española added the verb cantinflear — to speak in a nonsensical manner — to the dictionary.

The golden age of Mexican cinema began in 1936 and lasted more than 30 years. Latino families made weekly treks to el cine and a new Cantinflas film was often the reason. San Antonians of a certain age still remember when the small comic occasionally appeared at the Alameda theater along with such stars as Jorge Negrete, María Félix, Gloria Marín, Pedro Infante, Dolores Del Río, Pedro Armendáriz, and Tito Guízar.

By the 1950s the era of great Hollywood comics had faded, but Hollywood came courting the populist and popular Cantinflas. His role as Passepartout, David Niven’s valet in Around the World in 80 Days, remains the one high point in the 1956 Best Picture Oscar-winner. Cantinflas also won a Golden Globe for best motion picture actor in a comedy/musical for his role — beating out Yul Brynner and Marlon Brando.

But when Hollywood attempted to cash in on Moreno’s newfound fame by casting him in as the lead in 1960‘s Pepe, the film bombed. Jorge Camara, vice president of the Hollywood Foreign Press Association, which sponsors the Golden Globes, says the reason for its failure is simple.

“In Around the World in 80 Days, Cantinflas was able to use his physical comedy, something he didn’t do in his followup film, Pepe,” Camara said by email. “His genius and one of his greatest talents was the comic way he used (or misused) the Spanish language to fit his character and his situations. That ability, unfortunately, did not translate into English.”

When I moved to Los Angeles in 1980, many downtown movie palaces were programming Spanish-language films to meet the demand of recently arrived immigrants. The new waves of immigrants from El Salvador, Guatemala, and Nicaragua had one thing in common: Cantinflas. Most had grown up watching his comedies. He not only was a first-class film star, but also a cultural hero to his countless fans, especially the working class who identified with el peladito. 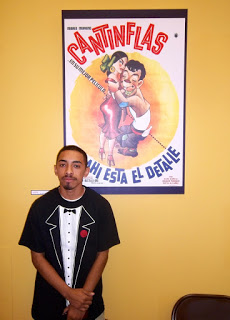 Cantinflas lookalike at San Antonio retrospective. Photo by Gregg Barrios / The Rag Blog.
But the end was near. The Mexican film industry was beginning to churn out substandard films filled with gratuitous nudity and blue humor.

Writer Sandra Cisneros has kept a ceramic figure of el peladito in her bathroom for nearly 20 years. “Isn’t it from the street that all fashion and pop culture ultimately comes from?” Cisneros asked.

Every time I see someone walking down the street with their pants falling off, I think, mira, hay va Cantinflas. El peladito was ahead of his time for showing his calzones and dragging his pants down to his hips like hip-hop kids do.

Cantinflas is a cultural icon like la virgen de Guadalupe. You have to have an image of the Virgen and Cantinflas whether or not you’re Catholic or have seen his films. They are omnipresent in Chicano culture and in some ways the antithesis of themselves because each one in a sense is god: the Guadalupe is the compassionate face of god, while Cantinflas is a symbol just like the Virgen of the oppressed. For a few moments, he makes you laugh, and if that isn’t God I don’t know what is

For a mural at the Teatro de los Insurgentes in Mexico City, Diego Rivera painted Cantinflas as a Christ figure with an image of the Virgin on his clothing — a latterday Juan Diego. The mural drew outrage and was later modified and the Guadalupe removed. Today it depicts Cantinflas taking money from the rich and redistributing it to the poor. In real life, Moreno was a co-founder and president of the Mexican actor’s union, ANDA, and funded La Casa del Actor, a haven for needy film industry workers.

Herbert Siguenza, a founding member of the Chicano performance troupe Culture Clash, considers Cantinflas a muse and a hero. Siguenza wrote a one-man show that pays tribute to Moreno, commissioned by Houston’s Alley Theater. Part biography, part comic sketches, his Cantinflas! illustrates el peladito’s influence on comedy today and introduces the character to a new generation that perhaps only knows the him from the animated children’s Cantinflas Show on Spanish-language TV.

“There is a new generation, a second generation of young Latinos growing up, and these kids don’t know who Cantinflas is,” Siguenza said in a recent phone interview. “They know who Will Smith and Jim Carrey are, but I wanted to show them that we also have a comic hero; we have someone who was as big as Charlie Chaplin. And we should remember that. He was one of the first crossover stars that we had.” Still, Siguenza admits it’s a hard sell to English-only audiences. “The verbal antics aren’t transferable. It’s like trying to translate Groucho in Chinese.”

In 1983, on assignment for the Los Angeles Times, I interviewed Don Mario in Mexico City two years after what was to be his final film, El Barrendero (The Street Sweeper), which at the time had made more money at the box office than any other Mexican film. He was still upbeat about his art, and expressed a desire to have el peladito cross the border into California to join César Chávez’s farmworkers and perform with Luis Valdez’s Teatro Campesino.

He spoke of his screen counterpart in the third person:

Cantinflas has changed because he is part of the world, part of the people. We all change. The little guy isn’t the same one from 30 or 40 years ago. He has the same ingenuity, but he is better prepared than he was before to deal with life. He may see the same problems of years ago occur again today, but he sees them from a different perspective. Cantinflas has changed but he still carries the essence of being part of the common people. The clothes he wore before aren’t worn anymore, so he doesn’t wear them, but he’s the same guy underneath. That won’t ever change.

Later, watching his penultimate film, El Patrullero 777 (Patrolman 777), I saw what he meant. His comic style of cantinfleando had morphed into the everyday doublespeak of politicians everywhere. In the film, Moreno portrays a patrolman, but he still sports his signature bigotito, his thin mustache. When his commanding officer asks why he no longer wears his pants low, he retorts: “Todo a subido” (“Everything’s gone up”).

Yet the old Cantinflas, more the social reformer than the social satirist, makes an appearance at the end of the film. In a speech that contains little of el peladito’s double talk, he laments the loss of trust and dignity in public officials in a speech in front of a building named for former Mexican president Gustavo Díaz Ordaz, under whose orders hundreds of university students were killed during the 1968 protests in Mexico City.

Cantinflas then lifts his gloved hand, echoing a moment during the 1968 Summer Olympics — also held in Mexico City — when African-American medalists raised clenched fists in a human-rights salute. By that time, I was in tears.

This article was published at Plaza de Armas and was crossposted to The Rag Blog.