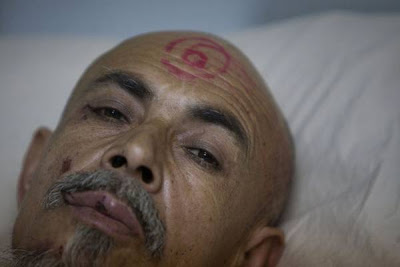 Sar Bland, an Afghan man who was injured in a rocket attack in Tagab, lies on bed at a hospital at the U.S. base at Bagram, Afghanistan. An official said the death of civilians in U.S. rocket attacks presumably aimed at military officials and local leaders underscores the inability of NATO to successfully defeat the Taliban in eastern Afghanistan. Photo by Musadeq Sadeq / AP.
Is the military fudging on civilian casualties
To avoid pentagon oversight?

On Monday, the anonymous blogger Security Crank noticed something interesting: all the U.S. and NATO airstrikes in Afghanistan seemingly kill exactly 30 people every time. How can that be?

Security Crank documented no less than 12 occasions in which news reports, relying on field commanders’ estimates, noted that exactly 30 suspected Taliban were killed in airstrikes and, occasionally, artillery attacks. He said:

But the much more important point remains: how could we possibly have any idea how the war is going, here or anywhere else, when the bad guys seem only to die in groups of 30? The sheer ubiquity of that number in fatality and casualty counts is astounding, to the point where I don’t even pay attention to a story anymore when they use that magic number 30. It is an indicator either of ignorance or deliberate spin… but no matter the case, whenever you see the number 30 used in reference to the Taliban, you should probably close the tab and move onto something else, because you just won’t get a good sense of what happened there.

So, why is it always 30? Do 30 casualties seem like enough to justify a military attack, or few enough to not attract too much attention to an incident?

Another blogger, Joshua Foust of the Central Asia blog Registan, seemingly stumbled upon the answer. In a tweet, he noted:

In 2003, an air strike killing 30 civilians could be launched w/o issues. 31 dead civilians and Rummy had to approve.

Foust then linked to an LA Times article from last July by Nicholas Goldberg that documented what field commanders were told.

In a grisly calculus known as the “collateral damage estimate,” U.S. military commanders and lawyers often work together in advance of a military strike, using very specific, Pentagon-imposed protocols to determine whether the good that will come of it outweighs the cost.

We don’t know much about how it works, but in 2007, Marc Garlasco, the Pentagon’s former chief of high-value targeting, offered a glimpse when he told Salon magazine that in 2003, “the magic number was 30.” That meant that if an attack was anticipated to kill more than 30 civilians, it needed the explicit approval of then-Defense Secretary Donald H. Rumsfeld or President George W. Bush. If the expected civilian death toll was less than 30, the strike could be OKd by the legal and military commanders on the ground.

In other words, the Pentagon determined that 30 casualties, even if they were civilian, were too few to matter politically or to attract the attention of the press for more than a few words. If commanders expected more civilian casualties than that, political leaders had to sign off on the attack in advance to make sure they were prepared for the PR fall-out.

That PR calculus of how many deaths matter to the average American has apparently carried over from the Bush Administration to the Obama Adminstration, at least insofar as ground commanders are concerned. But the American people deserve the truth about how many Afghans — civilian and otherwise — are being killed by our forces. Just because senior officials at the Pentagon think that killing 30 people doesn’t warrant their attention doesn’t mean they’re right.

1 Response to Grisly Calculus : Fudging on Civilian Casualties in Afghanistan