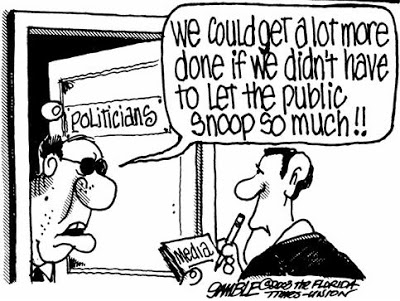 ‘First and foremost, the group wants Obama to reverse the policies of the Bush administration regarding the handling of public records.’
By Lyndsey Layton / November 12, 2008

The incoming Obama administration needs to use the Internet to publish reams of new information about federal spending, policies and performance as well as other records that have been increasingly shrouded from public view, a coalition of conservative, libertarian and progressive groups is recommending today.

The group, which has been studying government secrecy and ways to fix it for 20 months, called on Congress to invest in technology to bring federal record-keeping and communication into the 21st century.

“This was a group with very different political agendas, but we have enormous common ground on the view that government should be open and we should all have the same information to work with,” said Gary D. Bass, executive director of OMB Watch, a nonpartisan group that organized the effort.

“We view the government as operating in the 20th century — some would say the 19th century,” said Bass, who presented the report to President-elect Barack Obama’s transition team. “But we’re living in the 21st century.”

The report said federal agencies should embrace the Internet and all its possibilities, allowing the public to review pending policies and comment online or through interactive dialogues, tap into extensive databases, and get e-mail updates and RSS feeds.

But first and foremost, the group wants Obama to reverse the policies of the Bush administration regarding the handling of public records.

The Bush White House set the tone early when Vice President Cheney rebuffed lawmakers and environmentalists who requested records from his energy policy task force, a battle the administration eventually won in the Supreme Court.

But after the attacks of Sept. 11, 2001, efforts to shield government decision-making from scrutiny went into overdrive.

In early 2002, then-Attorney General John D. Ashcroft issued a memo to government agencies urging them to reject requests for access to public documents allowed under the Freedom of Information Act if they could find a legal argument against the release. It was a reversal from the Clinton administration’s stance, which assumed that records were public unless government proved otherwise.

Later, then-White House Chief of Staff Andrew H. Card Jr. directed agencies to restrict access to “sensitive but unclassified” information, removing tens of thousands of documents from public view. Some records that previously were publicly available ended up being reclassified and shielded from scrutiny.

“On the national security side, it’s almost become a reflexive response,” Bass said. “The theme was: Secrecy makes us safer. And none of us agree with that.”

The impact of the directives over time is clear.

The report said the Obama administration should instruct all agencies not to wait for FOIA requests but to proactively publish records, searchable databases, policy information and performance data.

The report also recommended launching a searchable accountability database on the Internet that includes who gets money from the federal government, how it is spent, who is lobbying the executive branch and who is working in high-level government posts — including their prior jobs and their employment after government service.

The group says it thinks Obama will be receptive to its recommendations, citing his advocacy of opening government to greater scrutiny and his co-sponsorship of a law that requires the Office of Management and Budget to put government contract information online. The site, http://www.usaspending.gov/, was launched this year.

“That was a precedent, an example of the kind of change we need,” Bass said. “With the click of a mouse, you can find out who is getting how much money and for what. We know what Obama is thinking. There’s a clear sense that he believes in the Web 2.0 model of government. There’s a clear sense he thinks there should be much more transparency.”

Obama also ran a tech-savvy campaign, exploiting the Internet and new technologies in ways never before seen in national politics.

Among the group’s other recommendations for Obama:

* Define public information as broadly as possible, including audio, photos and video.

* Rescind an executive order signed by President Bush that limits access to the records of former presidents.

* Make greater use of redaction to release partial records when the administration cannot provide full disclosure, as opposed to making entire documents unavailable.

* Make exemptions from disclosure as narrow and specific as possible.