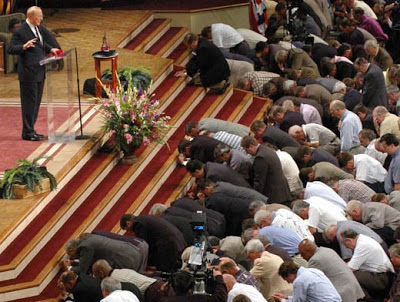 James Dobson leads flock in prayer during an anti-gay “Battle for Marriage” rally.
Uproar over plans to induct evangelist Dobson into broadcast hall of fame.
By Michelle Garcia / October 2, 2008

Four organizations are demanding that the Museum of Broadcast Communications retract its decision to induct Focus on the Family founder James Dobson into its hall of fame.

The groups are urging supporters to contact the Chicago-based museum to share their disapproval, and to participate in a protest against the induction.

Truth Wins Out, the Gay Liberation Network, Equality Illinois, and Soulforce issued a letter to museum organizers asking to leave Dobson out of the annual ceremony.

“It is simply unconscionable that the museum is giving its imprimatur to a demagogue who has profited from divisive and discriminatory rhetoric. If the museum wants to regain its respect and credibility, it will choose to dump Dobson,” Truth Wins Out executive director Wayne Besen said in a statement.

Aside from establishing Focus on the Family, Dobson’s work also includes founding Love Won Out, a prominent organization that claims to cure gays and lesbians of their homosexuality. At least seven scientists and psychologists have accused him of cherry-picking research results to back his teachings, according to the statement.

Dobson established Focus on the Family in the 1970s and launched a radio show after a television appearance in 1978. The internationally syndicated show has been on the radio ever since, airing on 4,000 stations around the world.

Should the museum choose to go ahead with Dobson’s induction, the ceremony will take place November 8 at the Renaissance Chicago Hotel.