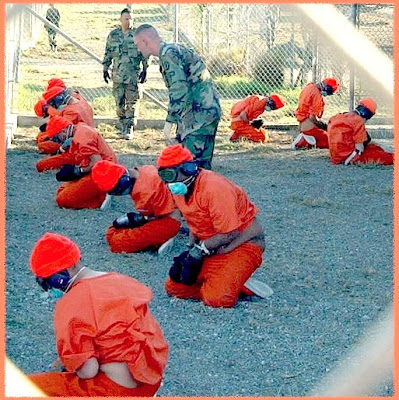 The Republican game plan is to make it look like Obama is about to empty the prison camp down in Cuba, and turn out the lights and let the terrorists be set loose across America.

With only 23 percent of Americans now claiming to be Republicans, what’s left of their party has decided to attack Barack Obama for “not having a plan” to close the Guantanamo Bay Detainee Center. It has been a loud, shameless exercise in fear-mongering.

The protean Senators have said, “Never mind the priority of halting a national financial collapse and possible economic depression in America. Forget the powder keg that is the Taliban and al-Qaida threat in Pakistan and Afghanistan. Personal political futures back home are much more important.

The Senate let personal political priorities guide their 90 to 6 vote to withhold the $80 million Obama requested for the Guantanamo closure till he gives them “a plan.” Scared silly Democrats also joined in the disgraceful fear-mongering vote.

No one would like to get Mr. Bush’s nightmarish mess cleared up more than Mr. Obama. His Thursday speech made clear that work has been underway by legal, military, and diplomatic experts to solve the complex problem since he took office less than 150 days ago. But Republicans desperate to woo back lost votes are all screaming BOOGIE MAN COMING!!

They warn that dangerous terrorists are going to be moved to jails and prisons in their districts back home where they could break out and hide under YOUR bed waiting to get you! The scenario continues with terrorists being turned loose with a new suit of clothes and a few bucks, on the streets of YOUR TOWN! Shamefully, Majority Leader, Harry Reid said, “Part of what we don’t want is them be put in prisons in the United States.” That’s the way to support “real change,” Harry.

The whipped up fear exploits a deeply buried American realization that if we or our family members had been rounded up, shackled, tortured and held with no charges and no rights for seven years we would be mad as hell. Just as mad as the Gitmo prisoners who have been treated that way and are now “headed for the streets of America.” OMG

The Republican game plan is to make it look like Obama is about to empty the prison camp down in Cuba, and turn out the lights and let the terrorists be set loose across America. Lots of plain folks, aided by Dick Cheney’s mad raving on cable TV may actually believe this nonsense.

Just so the politically terrorized can all sleep at night without having to leave the lights on, let’s review some facts:

Thirty three international terrorists, including those with al-Qaida connections are locked up in the Federal prison known as the “Alcatraz of the Rockies,” or ADMAX Florence in Florence, Colorado, and there has been no public outcry at all.

Any bad guys transferred from Guantanamo to the USA will be housed in maximum security, super-max prisons, like the Fort Leavenworth prison and the Florence ADMAX. No dangerous Guantanamo prisoners are to be released in the USA. The most dangerous of the prisoners held in Guantanamo are to be incarcerated as “enemy combatants” in maximum security prisons, as will others awaiting trial in a federal court of law in the US. No one has ever escaped from a super-max prison.

Terrorists and violent criminals are kept in solitary confinement, and when moved outside their cells one hour a day, they are in leg shackles accompanied by three guards. They rarely see other prisoners, are allowed few visitors and their mail is monitored. Ramzi Yousef, who headed the group that carried out the first bombing of the World Trade Center in February 1993 faces this daily routine as a prisoner in the $60 million Florence, Colorado super-max prison.

Let’s look at how many prisoners we are talking about after Guantanamo is finally closed. Since 2002, 775 detainees have been brought to Guantanamo. Some 420 have been released to countries of origin or other countries with no charges against them. In late January 2004, U.S. officials finally released three children aged 13 to 15 swept up as “enemy combatants” and returned them to Afghanistan. As of January 2009, approximately 245 detainees remain and only three of them have been charged.

The US Department of Defense on February 11, 2008, charged terrorists Khalid Sheikh Mohammed, Ramzi Binalshibh, Mustafa Ahmad al-Hawsawi, Ali Abd al-Aziz Ali and Walid Bin Attash for the September 11 attacks under the Military Commissions Act of 2006. Untangling the details of trying these 911 terrorists is part of what is taking time to find a constitutionally and internationally legal approach to handling these cases which involve serious questions, not the least of which include torture.

Earlier, U.S. officials have said they intended to eventually put 60 to 80 prisoners on trial and free the rest. But what to do with those held for years, and never charged? That is one of many tough problems taking so much time to work out. Mr. Cheney and some hard core conservatives would prefer to keep them locked up in Cuba forever, innocent or not, Constitution be damned.

It would seem that our Congressmen and Senators, would all be pitching in on a a plan to work out a diplomatic, constitutional way to deal with these thorny problems and close this sad chapter in our history.

Yes these prisoners include dangerous terrorists who want to hurt America. But all have to be dealt with under the law. Holding them in maximum-security prisons poses no threat to our security at home. Continuing to do what we have been doing for the past seven years in Guantanamo remains a growing threat to our security.

We cannot continue to hold these prisoners in indefinite limbo on our military base in Cuba. The United States Supreme Court has ruled that they are entitled to the protection of the U.S. Constitution, the same constitution our Congressmen and Senators have sworn to defend and uphold.