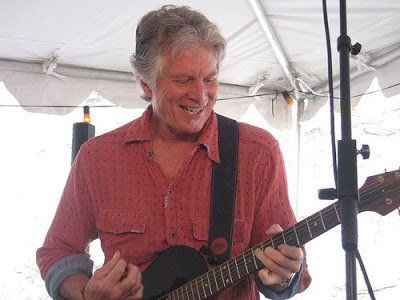 Stephen Bruton, the Fort Worth Flash.

Stephen was music, a genuine player’s player… Kristofferson called him ‘the best damn rock and roll guitar player in the world.’

Turner Stephen Bruton, the Fort Worth Flash and “the best damn rock and roll guitar player in the world,” as his friend, mentor, and bandleader Kris Kristofferson would introduce him night after night, rode off into the sunset on Saturday, May 9, at the doorstep of the Pacific Ocean.

Stephen was music, a genuine player’s player. He was a mandolinist, banjo picker and guitarist who trafficked in bluegrass at Arlington Heights High School where he was recognized as Most Talented and performed with the Brazos Valley Ramblers. His mom and dad ran Record Town, a record shop across from TCU that his brother and mother still run today, and one of the greatest dispensers of “hep” Fort Worth ever had, educating critic Dave Hickey, producer T-Bone Burnett, and western swing scholar Kevin Coffey, among others.

He rambled around briefly after graduating from high school, hanging out in Woodstock with Geoff Muldaur and the players in the Band before hooking up with Kris Kristofferson, for whom he ended up playing lead guitar for 17 years. Back home, he dove into the blues at local jooks, most prominently the New Bluebird Nite Club, where he and his high school music buddy T-Bone (formerly J. Henry) Burnett co-produced an exceptional gritty live recording of Robert Ealey & His Five Careless Lovers, a band that included Stephen’s brother Sumter. Stephen fronted his own occasional Fort Worth band, Little Whisper & the Rumors with Jim Colegrove, whom he’d met up in Woodstock, when he wasn’t hanging in his new hometown of Los Angeles, where he was the kid with the gig to a cadre of hungry Fort Worth expats including Delbert McClinton and Glen Clark.

After leaving Kristofferson, Stephen joined up with Bonnie Raitt just as she was enjoying her second burst of fame for Give It Up for an extended spell, writing songs for her. He briefly worked with Bob Dylan. 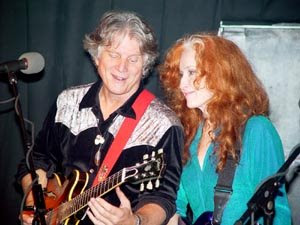 Stephen Bruton and Bonnie Raitt.
His movie star good looks were the real deal. He appeared in a number of films beginning with “A Star Is Born” and “Songwriter.”

For the past 13 years, he fronted the Resentments, a collective of clean and sober players (Jon Dee Graham, Scrappy Jud Newcomb, Bruce Hughes, the late Mambo John Treanor and John Chipman) who held court early Sunday evenings at the Saxon Club, an under the radar joint where they developed a bar band groove so cool, they were “discovered” and toured Japan and Europe, but hardly anywhere else in the United States.

Stephen was diagnosed with cancer in December 2006, a few days after I visited him to talk about Willie for the book I was working on. We ended up talking about Fort Worth’s rich but hidden music history, touching Sock Underwood, Robert Johnson, and graveyard jams involving white and black musicians in the days of segregation.

After a long fight with his sickness, he left Austin this past winter when T-Bone Burnett chartered a jet for Stephen the night after T-Bone won a Grammy and brought him to Los Angeles where they were working on a movie soundtrack.

Stephen had a full life despite barely making it to 60. He had so much more in him, though, his early exit is a huge loss for those who knew him and loved him and those who simply knew him through his music.

[Joe Nick Patoski, who lives near the village of Wimberley in the Texas Hill Country, writes about Texas and Texans. He has authored biographies of Willie Nelson, Selena and Stevie Ray Vaughan and has been published in numerous periodicals including Rolling Stone and Texas Monthly. A version of this article appeared on his blog, Notes and Musings.]

This entry was posted in Rag Bloggers and tagged Austin, Fort Worth, Musicians, Texas. Bookmark the permalink.