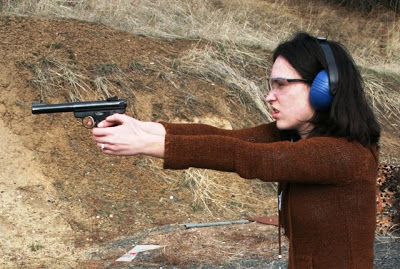 HARROLD, Texas — Traci McKay was horrified when, on the first day of school last week, her 14-year-old daughter bounded through the front door of their home and breathlessly demanded, “Which teachers are carrying guns?”

It was a fair question. The girl’s rural North Texas school district had authorized some teachers to carry concealed pistols to class, the first district in the state, and perhaps the nation, to do so.

The school board’s decision last year permitting teachers and staff to carry arms is ricocheting across the nation and beyond, with media crews from as far as Italy descending on this community.

With Gov. Rick Perry giving an endorsement of sorts last week, saying all districts should have the power to decide who brings guns to schools, the issue is not likely to go away.

Supporters say the district is taking proactive steps to protect students against the threat, unlikely as it may be, of some armed thug coming to campus to do harm.

Detractors say the district is inviting into schools the dangers that exist outside school campuses.

The biggest champion of the school district’s policy, superintendent David Thweatt, said his goal is to arm the good guys in order to deter the bad who might want to turn tiny Harrold, with its 100 students, into the next Columbine, the Denver-area high school that was the site of the infamous 1999 shooting that left 15 dead, including the two student gunmen.

School massacres of the past have shown they can happen anywhere, Thweatt said.

Two geographic factors make Harrold’s school vulnerable, he said. It is only about 1,000 feet from the four-lane U.S. 287, yet it’s 18 miles away from the local Sheriff’s Office.

“I don’t want to call a parent and say, ‘Some bad guy came in, and your kid’s dead, and we didn’t have a good plan to prevent it,’ ” Thweatt said last week from his office.

It’s hard to know how Harrold’s staff feels about the district’s policy. None was authorized by Thweatt to discuss it.

Thweatt said he and the school board explored other options to protect Harrold’s kids, like hiring a security guard or allowing teachers to carry less lethal weapons like beanbag guns, tranquilizers and Tasers. But none seemed up to the task.

“You don’t take a knife to a gunfight,” Thweatt enjoys saying.

But not everyone is so sure.

“We’re not exactly a downtown metropolis, a seedbed of crime,” said Diane Brown, a Harrold resident whose two adult sons passed through Harrold’s schools. “We’ve lived here for 45 years and can’t recall the last houses that got burglarized.”

Wilbarger County Sheriff Larry Lee said the area suffers from some petty thefts but has no gang problem and little violent crime. The last couple of homicides?

Among ‘the safest places’

Lee said that Thweatt isn’t unreasonable either when he talks about the school’s remote location. The 999-square-mile county is patrolled by no more than three deputies at any given time. Should his men be on the wrong side of the county during an emergency at Harrold’s school, it might take 25 minutes for them to arrive, Lee said.

According to the Brady Center to Prevent Gun Violence, a gun-control advocacy group, fewer than 1 percent of school-age homicide victims are killed on school grounds or on their way to or from school.

“Schools are amongst the safest places in America,” said Brian Siebel, senior attorney at the Brady Center. “Homicides at schools are the extraordinary, exceptional situation. Our no-gun policies are very effective.”

Texas outlaws firearms on school campuses “unless pursuant to the written regulations or written authorization of the institution,” which Barbara Williams, a spokeswoman for the Texas Association of School Boards, said puts Harrold on solid legal ground.

Concerned about aiding potential enemies, Thweatt won’t say which teachers carry guns to class or even how many.

Lee said he had heard that four of the school’s 25 staff members had been cleared to carry arms.

Thweatt said teachers and staff must keep the loaded pistols attached to their bodies at all times. They must hold a concealed weapons license, then be approved by the board and go through additional training.

Ruth Edwards, 65, is elated by the idea of pistol-carrying teachers because she thinks it’ll keep her 8-year-old daughter, Katie, safe.

“It’s safety for her and peace of mind for me,” Edwards said.

But the idea of armed teachers has left some parents, like McKay, fuming.

“We pay teachers to educate, nothing more,” said McKay, 34, who has three children in the district.

This entry was posted in RagBlog and tagged Gun Laws, Public Schools, Texas. Bookmark the permalink.