Guns of August : Why Obama’s Ratings Are Falling 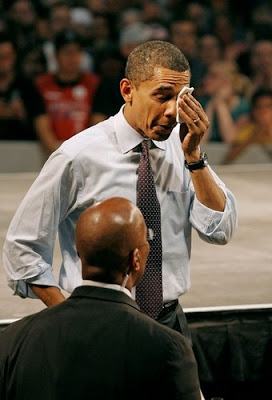 President Obama’s job approval rating is at the lowest point of his presidency — a drop largely caused by erosion in support among the political independents who gave him an electoral landslide, a new poll suggests.

The CNN/Opinion Research Corp. survey results released yesterday show his overall approval number at 53 percent, down from 76 percent in early February, just after he took office.

The increasingly bitter partisanship appears to be taking a toll on the president — boston.com / September 2, 2009

See ‘The guns of August…’ by Robert Reich, Below.

My comment: The corporate Democrats in Congress are blocking the progress that Obama seeks. So long as Obama is unable to organize his populist and independent base to pressure them and so long as the economy appears to be recovering, our corrupted political system will probably not get behind deep reform.

Maybe the system has to crash and hit bottom (as I think it will due to long term trends) before an alarmed general population (the independents seem to be a weather vane here) will want or accept strong leadership like an FDR. When things get really bad, politics by its nature tends to favor stronger, more radical medicine on both right and left. 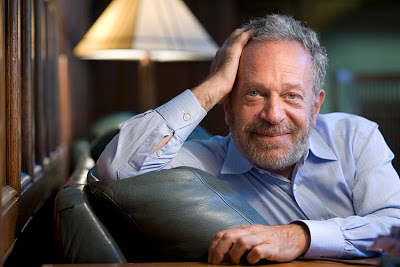 What we learned in August is something we’ve long known but keep forgetting: The most important difference between America’s Democratic left and Republican right is that the left has ideas and the right has discipline. Obama and progressive supporters of health care were outmaneuvered in August — not because the right had any better idea for solving the health care mess but because the right’s attack on the Democrats’ idea was far more disciplined than was the Democrats’ ability to sell it.

I say the Democrats’ “idea” but in fact there was no single idea. Obama never sent any detailed plan to Congress. Meanwhile, congressional Dems were so creative and undisciplined before the August recess they came up with a kaleidoscope of health-care plans. The resulting incoherence served as an open invitation to the Republican right to focus with great precision on convincing the public of their own demonic version of what the Democrats were up to — that it would take away their Medicare, require “death panels,” raise their taxes, and lead to a government takeover of medicine, and so on.

The Obama White House — a veritable idea factory brimming with ingenuity — thereafter proved unable to come up with a single, convincing narrative to counteract this right-wing hokum. Whatever discipline Obama had mustered during the campaign somehow disappeared.

This is just the latest chapter of a long saga.

Over the last twenty years, as progressives have gushed new ideas, the right has became ever more organized and mobilized in resistance — capable of executing increasingly consistent and focused attacks, moving in ever more perfect lockstep, imposing an exact discipline often extending even to the phrases and words used repeatedly by Hate Radio, Fox News, and the oped pages of The Wall Street Journal (“death tax,” “weapons of mass destruction,” “government takeover of health care”).

I saw it in 1993 and 1994 as the Clinton health care plan — as creatively and wildly convoluted as any policy proposal before or since — was defeated both by a Democratic majority in congress incapable of coming together around any single bill and a Republican right dedicated to Clinton’s destruction. Newt Gingrich’s subsequent “contract with America” recaptured Congress for the Republicans not because it contained a single new idea but because Republicans unflinchingly rallied around it while Democrats flailed.

Democrats and progressives let a thousand flowers bloom. Republicans and the right issue directives. This has been the yin and yang of American politics and culture. But it means that the Democratic left’s new ideas often fall victim to its own notorious lack of organization and to the right’s highly-organized fear mongering.

I suppose I’m as guilty as anyone. A few weeks ago I casually mentioned in a web conversation on Politico’s web page that if supporters of universal health care and a “public option” felt their voices were not being heard in our nation’s capital they should march on Washington. A few moments later, when someone wrote in asking when, I glanced at a calendar and in a burst of unreflective enthusiasm offered September 13. I didn’t check with anyone, didn’t strategize with progressive groups that have been working on health care for years, barely checked in with myself.

I was deluged with emails. Many people said they were planning to march. Someone put up a web page, another a Facebook page, a member of Congress announced his support. But most people said they couldn’t manage September 13. It was too soon. It conflicted with other events. It followed too closely behind a right-wing march against health care reform already scheduled for September 12. It was a day AFL leaders were out of town, so couldn’t lend their support. Many who emailed me wanted another day — September 20, or the 27th, or early October. Others said they’d rather march on their state capital, in order that local media cover it.

When I finally checked in with the heads of several progressive groups and unions in Washington — all with big mailing lists and the resources to organize a big march — they said they were already planning a march, for October. But they still haven’t given me a date. (I will pass it on as soon as I hear.)

August is coming to a close, and congressional recess is about over. History is not destiny, and Democrats and progressives can yet enact meaningful health care reform — with a public option. But to do so, we’ll need to be far more disciplined about it. All of us, from Obama on down.

[Robert B. Reich has served in three national administrations, most recently as secretary of labor under President Bill Clinton. He also served on President-Elect Obama’s transition advisory board. His latest book, Supercapitalism, is now out in paperback.]

5 Responses to Guns of August : Why Obama’s Ratings Are Falling