Gustav: Another Chance for BushCo to Shine 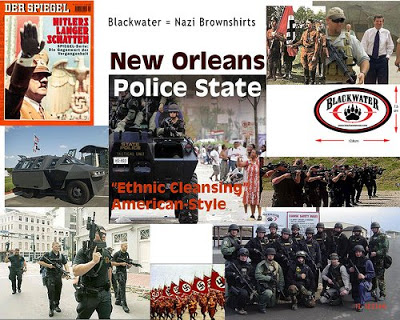 Blackwater Gearing Up for Hurricane Gustav
By R.J. Hillhouse / August 29, 2008

Gustav Blackwater Worldwide is currently seeking qualified law enforcement officers and security personnel to potentially deploy to provide security in the possible aftermath of Hurricane Gustav. This is the first time Blackwater has mobilized under its controversial Homeland Security contracts. Blackwater did deploy security personnel to assist New Orleans in wake of Hurricane Katrina and this resulted in great controversy since it was the first time a private military corporation had deployed on US soil.

Blackwater is compiling a list of qualified security personnel for possible deployment into areas affected by Hurricane Gustav. Applicants must meet all items listed under the respective Officer posting and be US citizens. Contract length is TBD.

1. Current sworn [may be full time, part time or reserve]

3. Armed status (must indicate Armed and/or Semi Auto. Revolver only not accepted) expiration must be greater than 60 days out

4. Departmental credentials (not just a badge)

2. All training verification [unarmed and armed certificates of completion]

Applicants will be required to provide an electronic copy of the above required credentials/documents, recent photo within the last six months with response to this AD prior to consideration for deployment.

Personnel who meet the above qualifications and are interested, please send resumes and files to: 25505@blackwaterusa2.hrmdirect.com

Source / The Spy Who Billed Me

From the National Hurricane Center:

DATA FROM AN AIR FORCE RECONNAISSANCE AIRCRAFT INDICATE THAT MAXIMUM SUSTAINED WINDS HAVE CONTINUED TO INCREASE AND ARE NOW NEAR 120 MPH…195 KM/HR…WITH HIGHER GUSTS. GUSTAV IS A DANGEROUS CATEGORY THREE HURRICANE ON THE SAFFIR-SIMPSON HURRICANE SCALE. GUSTAV IS EXPECTED TO PASS OVER WESTERN CUBA AS A MAJOR HURRICANE…AND COULD REACH CATEGORY FOUR STATUS BEFORE MAKING LANDFALL THERE. ADDITIONAL STRENGTHENING IS POSSIBLE OVER THE SOUTHERN GULF OF MEXICO

And, the latest projected track has it hitting the coast of Louisiana in the very early hours of Tuesday: 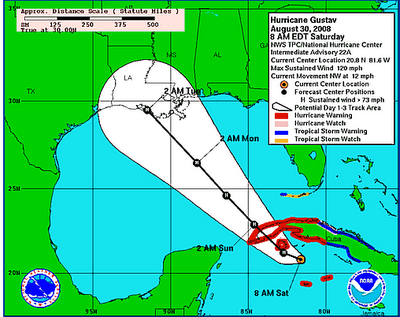 Scott McClellan thinks this good be good for the Republican Party. Seriously:

“If it’s a major hurricane, I think that they certainly need to show they learned lessons from three years ago, both from a policy and perception standpoint,” McClellan said.

He also suggested that McCain could benefit politically from such a scenario: It would allow Bush to mount an effective GOP response to a disaster while removing the unpopular president from the convention roster.

“It could be a two-fer,” McClellan said.

This entry was posted in RagBlog and tagged Blackwater, New Orleans, Republican Party. Bookmark the permalink.