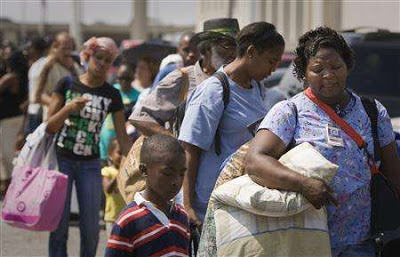 Waiting for the bus
Another Journey Begins … Waiting in New Orleans
By Bill Quigley / August 30, 2008

In the blazing midday sun, hot and thirsty little children walk around bags of diapers and soft suitcases piled outside a locked community center in the Lower Ninth Ward. Military police in camouflage and local police in dark blue uniforms and sunglasses sit a few feet away in their cars. Moms and grandmas sit with the children quietly. Everyone is waiting for a special city bus which will start them on their latest journey away from home.

Hundreds of buses are moving people away from the Gulf Coast. Hurricane Gustave is heading for the Louisiana coast nearly three years to the day after Hurricane Katrina destroyed hundreds of thousands of homes across the Gulf Coast. Many now face mandatory evacuation.

Dozens died in Haiti and the Dominican Republic after Gustave visited. After Katrina, few underestimate the potential of Gustave, now a Category 5 (out of a maximum of 5) storm.

Soldiers with long guns and police of all types are everywhere. Fifteen hundred police are on duty and at least that many National Guard are also here.

One estimate says two million people may be displaced.

In the lower nine, still no bus even after a wait of over two hours. Another mom clutching an infant walks up to the center with a small suitcase and adds another diaper bag to the pile. Children ask for water but nothing is provided. An African American nun named Sister Greta drives up with a few bags of ice and some water and paper cups and everyone happily shares.

This is the first step of displacement. Those with cars drive away. Those without walk to a community center with their children and wait for a bus. The first of many buses they will take in their journey to who-knows-where. The bus that people are waiting for will take them to the train station where people will get off the bus, be entered into computers, be given bar code bracelets, and then put on other buses for a trip to public shelters in places like Shreveport, Alexandria and Memphis.

Many waiting for this bus were in the Superdome when Katrina hit. One of the men shows a picture of himself on a bridge surrounded by flood waters where hundreds waited for boats.

There are still big problems. A 311 call system for the disabled and seniors never properly functioned, crashed and has been abandoned.

Though the wait for the bus is rough, this appears to be a huge improvement. When Katrina hit, there were no buses and no way out of town for the 25 per cent of the city who had no cars. As a result, nearly 100,000 people were left behind. This time the hospitals and nursing homes are emptying, the prisoners are already moved out, and there are buses to carry out tens of thousands. There are still big problems, but people do have a chance to get out.

Seniors worry about their social security checks, due the first of the month. Others worry about leaving behind pets. (One semi-rural area announced that each person getting on the buses could bring one pet, a dog or cat, no roosters, no pigs). Others worry about the looming 24 hour curfews. St. Bernard Parish promises that those out during curfew will be arrested and immediately transported to Angola, the Louisiana State Penitentiary.

Back at the community center, the bus finally pulls up. No one complains that it is late. Holding bags and children, people line up quietly in the sun to climb into their first bus. A blind man is guided into the bus. Little kids pull smaller children. Forty-three get on the bus. There are three nine-year old children, one seven-year old, one six, four three year olds, three one year olds, one infant is 11 months, a 3-month old, and a couple of young teenagers. All the moms and grandmas and kids and bags and diapers make it onto the bus and it pulls away.

Across the Gulf Coast, another journey starts.

[Bill Quigley is a human rights lawyer and law professor at Loyola University New Orleans. His essay on the Echo 9 nuclear launch site protests is featured in Red State Rebels: Tales of Grassroots Resistance from the Heartland, published by AK Press. He can be reached at quigley77@gmail.com.]

This entry was posted in RagBlog and tagged American Society, Nature. Bookmark the permalink.