Haiti and American Colonialism : The Story Behind the Story 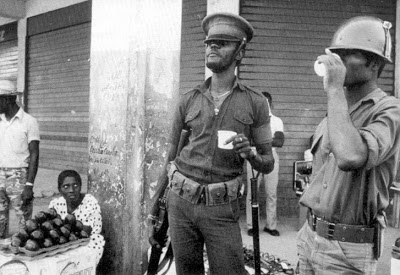 A member of François “Papa Doc” Duvalier’s Tonton Macoutes death squad, center, with Haitian soldier to his right. Note the look of terror on the woman vendor’s face. Image from Latin American Studies.

How did Haiti become so poor?
Haitian earthquake: Made in the USA

Also see ‘What you’re not hearing about Haiti,’ By Carl Lindskoog, Below.

As grim accounts of the earthquake in Haiti came in, the accounts in U.S.-controlled state media all carried the same descriptive sentence: “Haiti is the poorest country in the Western hemisphere…”

Gee, I wonder how that happened?

You’d think Haiti would be loaded. After all, it made a lot of people rich.

How did Haiti get so poor? Despite a century of American colonialism, occupation, and propping up corrupt dictators? Even though the CIA staged coups d’état against every democratically elected president they ever had?

It’s an important question. An earthquake isn’t just an earthquake. The same 7.0 tremor hitting San Francisco wouldn’t kill nearly as many people as in Port-au-Prince.

“Looking at the pictures, essentially it looks as if (the buildings are of) breeze block or cinder block construction, and what you need in an earthquake zone is metal bars that connect the blocks so that they stay together when they get shaken,” notes Sandy Steacey, director of the Environmental Science Research Institute at the University of Ulster in Northern Ireland. “In a wealthy country with good seismic building codes that are enforced, you would have some damage, but not very much.”

When a pile of cinder blocks falls on you, your odds of survival are long. Even if you miraculously survive, a poor country like Haiti doesn’t have the equipment, communications infrastructure or emergency service personnel to pull you out of the rubble in time. And if your neighbors get you out, there’s no ambulance to take you to the hospital — or doctor to treat you once you get there.

Earthquakes are random events. How many people they kill is predetermined. In Haiti this week, don’t blame tectonic plates. Ninety-nine percent of the death toll is attributable to poverty.

So the question is relevant. How’d Haiti become so poor?

The story begins in 1910, when a U.S. State Department-National City Bank of New York (now called Citibank) consortium bought the Banque National d’Haïti — Haiti’s only commercial bank and its national treasury — in effect transferring Haiti’s debts to the Americans. Five years later, President Woodrow Wilson ordered troops to occupy the country in order to keep tabs on “our” investment.

From 1915 to 1934, the U.S. Marines imposed harsh military occupation, murdered Haitians patriots and diverted 40 percent of Haiti’s gross domestic product to U.S. bankers. Haitians were banned from government jobs. Ambitious Haitians were shunted into the puppet military, setting the stage for a half-century of U.S.-backed military dictatorship.

Still — why should Haitians complain? Sure, we stole 40 percent of Haiti’s national wealth for 32 years. But we let them keep 60 percent.

Despite having been bled dry by American bankers and generals, civil disorder prevailed until 1957, when the CIA installed President-for-Life François “Papa Doc” Duvalier. Duvalier’s brutal Tonton Macoutes paramilitary goon squads murdered at least 30,000 Haitians and drove educated people to flee into exile. But think of the cup as half-full: fewer people in the population means fewer people competing for the same jobs!

Upon Papa Doc’s death in 1971, the torch passed to his even more dissolute 19-year-old son, Jean-Claude “Baby Doc” Duvalier. The U.S., cool to Papa Doc in his later years, quickly warmed back up to his kleptomaniacal playboy heir. As the U.S. poured in arms and trained his army as a supposed anti-communist bulwark against Castro’s Cuba, Baby Doc stole an estimated $300 to $800 million from the national treasury, according to Transparency International. The money was placed in personal accounts in Switzerland and elsewhere.

The Duvalier era, 29 years in all, came to an end in 1986 when President Ronald Reagan ordered U.S. forces to whisk Baby Doc to exile in France, saving him from a popular uprising.

Once again, Haitians should thank Americans. Duvalierism was “tough love.” Forcing Haitians to make do without their national treasury was our nice way or encouraging them to work harder, to lift themselves up by their bootstraps. Or, in this case, flip-flops.
Anyway.

The U.S. has been all about tough love ever since. We twice deposed the populist and popular democratically-elected president Jean-Bertrand Aristide. The second time, in 2004, we even gave him a free flight to the Central African Republic! (He says the CIA kidnapped him, but whatever.) Hey, he needed a rest. And it was kind of us to support a new government formed by former Tonton Macoutes.

Yet, despite everything we’ve done for Haiti, they’re still a fourth-world failed state on a fault line.

And still, we haven’t given up. American companies like Disney generously pay wages to their sweatshop workers of 28 cents an hour.

What more do these ingrates want?

[Ted Rall is the author of the new book Silk Road to Ruin: Is Central Asia the New Middle East?, an in-depth prose and graphic novel analysis of America’s next big foreign policy challenge.] 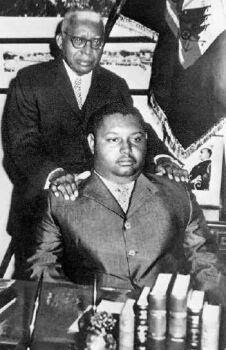 What you’re not hearing about Haiti
(But should be)

In the hours following Haiti’s devastating earthquake, CNN, The New York Times and other major news sources adopted a common interpretation for the severe destruction: the 7.0 earthquake was so devastating because it struck an urban area that was extremely over-populated and extremely poor.

Houses “built on top of each other” and constructed by the poor people themselves made for a fragile city. And the country’s many years of underdevelopment and political turmoil made the Haitian government ill-prepared to respond to such a disaster.

True enough. But that’s not the whole story. What’s missing is any explanation of why there are so many Haitians living in and around Port-au-Prince and why so many of them are forced to survive on so little. Indeed, even when an explanation is ventured, it is often outrageously false such as a former U.S. diplomat’s testimony on CNN that Port-au-Prince’s overpopulation was due to the fact that Haitians, like most Third World people, know nothing of birth control.

It may startle news-hungry Americans to learn that these conditions the American media correctly attributes to magnifying the impact of this tremendous disaster were largely the product of American policies and an American-led development model.

From 1957-1971 Haitians lived under the dark shadow of “Papa Doc” Duvalier, a brutal dictator who enjoyed U.S. backing because he was seen by Americans as a reliable anti-Communist. After his death, Duvalier’s son, Jean-Claude “Baby Doc” became President-for-life at the age of 19 and he ruled Haiti until he was finally overthrown in 1986.

It was in the 1970s and 1980s that Baby Doc and the United States government and business community worked together to put Haiti and Haiti’s capitol city on track to become what it was on January 12, 2010.

After the coronation of Baby Doc, American planners inside and outside the U.S. government initiated their plan to transform Haiti into the “Taiwan of the Caribbean.” This small, poor country situated conveniently close to the United States was instructed to abandon its agricultural past and develop a robust, export-oriented manufacturing sector. This, Duvalier and his allies were told, was the way toward modernization and economic development.

From the standpoint of the World Bank and the United States Agency for International Development (USAID) Haiti was the perfect candidate for this neoliberal facelift. The entrenched poverty of the Haitian masses could be used to force them into low-paying jobs sewing baseballs and assembling other products.

But USAID had plans for the countryside too. Not only were Haiti’s cities to become exporting bases but so was the countryside, with Haitian agriculture also reshaped along the lines of export-oriented, market-based production. To accomplish this USAID, along with urban industrialists and large landholders, worked to create agro-processing facilities, even while they increased their practice of dumping surplus agricultural products from the U.S. on the Haitian people.

This “aid” from the Americans, along with the structural changes in the countryside predictably forced Haitian peasants who could no longer survive to migrate to the cities, especially Port-au-Prince where the new manufacturing jobs were supposed to be. However, when they got there they found there weren’t nearly enough manufacturing jobs go around.

The city became more and more crowded. Slum areas expanded. And to meet the housing needs of the displaced peasants, quickly and cheaply constructed housing was put up, sometimes placing houses right “on top of each other.”

Before too long, however, American planners and Haitian elites decided that perhaps their development model didn’t work so well in Haiti and they abandoned it. The consequences of these American-led changes remain, however.

When on the afternoon and evening of January 12, 2010, Haiti experienced that horrible earthquake and round after round of aftershock, the destruction was, no doubt, greatly worsened by the very real over-crowding and poverty of Port-au-Prince and the surrounding areas.

But shocked Americans can do more than shake their heads and, with pity, make a donation. They can confront their own country’s responsibility for the conditions in Port-au-Prince that magnified the earthquake’s impact, and they can acknowledge America’s role in keeping Haiti from achieving meaningful development.

To accept the incomplete story of Haiti offered by CNN and the New York Times is to blame Haitians for being the victims of a scheme that was not of their own making. As John Milton wrote, “they who have put out the people’s eyes, reproach them of their blindness.”

[Carl Lindskoog is a New York City-based activist and historian completing a doctoral degree at the City University of New York. You can contact him at cskoog79@yahoo.com.]

3 Responses to Haiti and American Colonialism : The Story Behind the Story