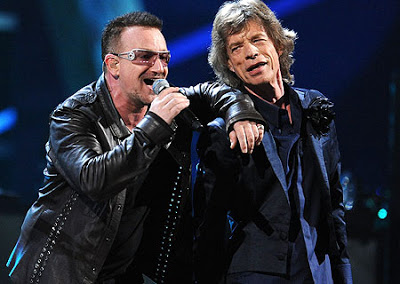 By Harvey Wasserman / The Rag Blog / November 3, 2009
[With Gary Baumgarten and Abbie Wasserman]

NEW YORK — Music history has been made with two uniquely powerful nights of performances at Madison Square Garden in celebration of the Rock and Roll Hall of Fame — and the educational foundation it supports.

Bruce Springsteen and the E Street Band; U2; Simon and Garfunkel; Metallica; Aretha Franklin; Annie Lennox; Stevie Wonder; Crosby, Stills & Nash along with Bonnie Raitt, Jackson Browne and James Taylor; Dion; Patti Smith; Smokey Robinson; the Jeff Beck Band; a surprise appearance by Mick Jagger; intros (both nights) by Tom Hanks (who said he did it “just to get the access pass”) and much much more turned midtown into the center of the musical universe once again.

With two (almost) completely different concerts (Jerry Lee Lewis played both nights) the Hall of Fame celebrated its 25th Anniversary and raised more than $4 million for a permanent endowment for the Cleveland-based museum and the educational work in which it specializes. An HBO special from the show will debut at the end of the long Thanksgiving weekend, Sunday, November 29.

Both concerts opened with the 74-year-old Lewis who, in a signature move, kicked over his piano bench the first night, then did it again on Friday.

Since his “Great Balls of Fire” was instrumental in kicking off the musical revolution that became Rock and Roll, it was a fitting pair of gestures.

Crosby, Stills & Nash’s impeccable set opened with their loving ode to the festival at Woodstock, this year celebrating its 40th anniversary. As Graham Nash reminded the audience, 30 years and one month ago, CSN was here in the Garden for the legendary “No Nukes” concerts, whose platinum triple album and feature film raised money and awareness for Musicians United for Safe Energy.

The trio was joined on “Love Has No Pride,” “The Pretender,” “Teach Your Children” and more by MUSE veterans James Taylor, Jackson Browne and Bonnie Raitt, whom David Crosby described as “my favorite singer in the world.”

The “CSN and Friends” show took the form of a “swing (and hug) your partner” fest in which a close-knit extended family of world-class musicians moved from their own songs to hits shared by the group in a graceful, loving minuet. It set the tone for all that followed.

Paul Simon (also a MUSE vet) opened with “Diamonds on the Soles of Her Shoes,” “Me and Julio Down by the Schoolyard,” and “You Can Call Me Al.” He was joined by Dion on “The Wanderer,” Crosby and Nash on “Here Comes the Sun,” and Little Anthony and the Imperials on “Two Kinds of People.” Art Garfunkel brought “The Sounds of Silence,” “Mrs. Robinson,” “Not Fade Away” and “Bridge Over Troubled Water,” in which he indeed conquered the high notes.

Stevie Wonder then delivered Bob Dylan’s “Blowin’ in the Wind,” “Uptight,” “I Was Made to Love Her” and more. He was joined in succession by Smokey Robinson for “Track of My Tears,” by John Legend for “Mercy, Mercy Me,” by B.B. King for his signature “The Thrill is Gone,” by Sam Moore for “Hold On, I’m Coming,” by Sting for “Higher Ground” and “Roxanne,” and by Jeff Beck for “Superstition,” among others. 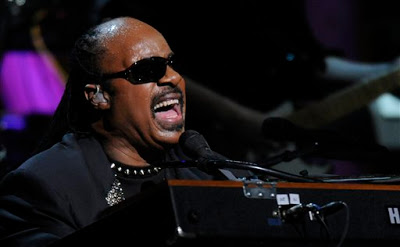 Stevie Wonder at Rock and Roll Hall of Fame concert. Photo by Henny Ray Abrams / AP.
Bruce Springsteen and the E Street Band then anchored the stage for the rest of the night. Tom Morello joined in for “the Ghost of Tom Joad,” John Fogerty for “Fortunate Son” and “Proud Mary,” Darlene Love for “A Fine, Fine Boy” and “Da Do Ron Ron” and Billy Joel for “You May Be Right,” “Only the Good Die Young,” and “New York State of Mind.” For a Star Spangled Finale reminiscent of the one with which they closed two MUSE nights in 1979, Fogerty, Moore, Browne, Love, Peter Wolfe and others joined Bruce and the E-Streeters in an unforgettable “Higher and Higher.”

After Hanks again hailed Rock & Roll, and Jerry Lee Lewis again kicked over his seat, Night Two opened with the Queen of Soul, Aretha Franklin’s “Baby I Love You” and “Don’t Play that Song,” in honor of the man who first signed her, the recently departed Ahmet Ertegun. Annie Lennox joined her for “Chain of Fools.” Then came Lenny Kravitz for “Think.” With “Respect” Aretha nailed things down, backed as she was by a 20-piece band that included her son Teddy on guitar.

Jeff Beck returned with a jazz/blues quartet in a set highlighted by “Drown in My Own Tears.” Sting joined in for “People Get Ready,” bluesman Buddy Guy for “Let Me Love You,” followed by ZZ Top’s Billy Gibbons for “Rough Boy” and Jimi Hendrix’s “Foxy Lady.”

After an instrumental version of “Day in the Life,” Beck gave way to Metallica’s high-amp renditions of “For Whom the Bell Tolls” and “One.” Lou Reed contributed “Sweet Jane” and then gave way to Ozzy Osbourne’s “Paranoid” and “Iron.” The Kinks’ Ray Davies set the stage for U2 with the classics “You Really Got Me” and “All Day and All of the Night.”

The rest of the show belonged to Bono and his bandmates and friends. Opening with “Vertigo,” the quartet sailed through “Magnificent” and “No Line on the Horizon.”

Springsteen and Patti Smith came out for a group cover of her “Because of the Night” — twice, apparently for the benefit of HBO, which may have needed the second take to cover a glitch the first time around. It’s a good bet you’ll see that one on the HBO Special at the end of the month.

Also a good bet is “Still Haven’t Found What I’m Looking For,” along with the Black Eyed Peas’ guest version of “Where is the Love.”

To top the two nights, Mick Jagger brought his aerobic instructor’s physique center stage with Fergie to do “Gimme Shelter” and “Stuck in a Moment.”

U2 closed down more than ten hours of the two-night extravaganza with “Beautiful Day.”

But not before Bono gave a monumental nod to “the saints, the heretics, the poets and punks that now make up our Hall of Fame.” Rock, Springsteen added, is a form of liberation that demands everyone “have fun with it.”

The fun was more than evident through both big nights, from Hanks’s loosey-goosey introductions and Jerry Lee’s pyrotechnics to a beautifully choreographed but gritty and completely professional 10-hour marathon from those who have created a culture that simply did not exist a half-century ago, and does not seem to be going away.

That a uniquely crafted museum stands to commemorate it in the nation’s heartland seems every bit as fitting as two powerful nights in the nation’s media center, a landmark event that has made possible the institution’s first permanent endowment.

Close your eyes, for example, and the beautifully bedecked Aretha could have been singing in Detroit’s New Bethel Baptist Church, founded by her father, where she first began to sing in the 1950s. The music industry has changed over the decades, she told us after her Friday performance, but it must do that to stay strong. “R&B, hip hop are alive and well,” she says. “Some of the lyrics I like,” she said, “some not so well.” But the karma of the Rock Hall allows her to “see older members… that have come a long way” along with “the new people.”

Among them might be Jeff Beck, who “thanked” Eric Clapton for being grounded by the gall stone operation that turned Beck from a back-up to a headliner. And Ozzy Osbourne, who challenged us to name another profession in which a performer knows that “when he’s fucked up it’s gonna be a good show.”

A more subdued Steven Van Zandt paid homage to “the British invasion” which got the industry “where we are today.” It was “fun to do a review” of multiple songs with multiple artists, as the E-Streeters did with Springsteen Thursday night. “It’s like an old school rock and roll show. That’s the way it used to be.”

After nominating Darlene Love for membership in the Hall, Van Zandt lamented that if the Rolling Stones were beginning now, his radio show, the “Underground Garage,” would be the only one to play them. “There is no format for new rock and roll,” Van Zandt said. “It’s almost impossible these days” for new groups to make a dent.

“When our generation goes,” he added, “it’s going to be weird.”

John Legend might agree. “I am the luckiest kid in the world,” he told us. “I haven’t paid my dues, and I am humbled and honored to be with Stevie Wonder” and “all these amazing artists that have been making music for a long time.”

“A new generation will be changing the world in different ways,” added Bonnie Raitt. “In the change we feel brewing, I think the Internet and the advent of satellite radio and independent newspapers… will help get the truth out and keep the debate going,” she told us. “I think music and rock and roll will continue to shepherd that along.”

“Rebellion is a life-long thing,” said Jackson Browne. “Rock and roll has always been the language of self-empowerment, freedom and community, and always will be.”

[Harvey Wasserman is author of Solartopia! and Harvey Wasserman’s History of the United States. He helped co-found Musicians United for Safe Energy, and spoke (for Greenpeace USA) at Woodstock II in 1994. Gary Baumgarten is the Paltalk News Network’s director of news and programming and host of the network’s News Talk Online; for CNN Radio he covered the 9/11 attacks in New York and Hurricane Katrina. Abbie Wasserman is a senior at Stern College in New York City, majoring in English literature.]

1 Response to Hall of Fame Concerts : Rocking the Garden!