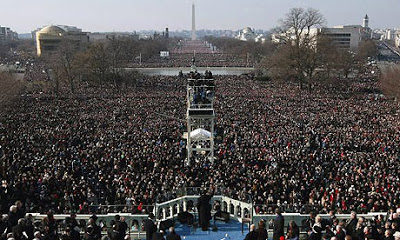 In his second inaugural address, the President clearly articulated a progressive agenda for the next four years that we on the left should organize around.

Workers are marching in New York City, Boston, Chicago, and San Francisco for their rights. Activists for women’s rights, gay rights, and the rights of people of color are on the move. Environmentalists are saying “no” Tar Sands and “yes” to moving nationally and globally against the dangers of climate change.

Everyone is calling on the Obama Administration to reject demands by the right wing to cut Medicare, Medicaid, and Social Security while protecting tax breaks for the rich and excessive military spending.

Millions of us worked to defeat the far right wing in the recent election and celebrated the historic reelection of an African American for president. During much of Obama’s first term, the President sought to compromise with the right wing, avoiding radical reforms, for example the one that would have provided Americans with single-payer health care. He was reluctant to defend American public institutions, such as schools and libraries, worker’s rights, and to demand adequate resources for rebuilding our physical infrastructure and saving our environment.

However, in President Obama’s 2013 inaugural address he affirmed his commitment to social and economic justice, peace, and protection of our precious and threatened environment. The President referred metaphorically to Seneca Falls, Selma, and Stonewall to underscore his commitment to women, African-Americans, and gays and lesbians.

While he should have added Flint, Michigan, site of worker sit-downs in 1937 where rights to organize were demanded, Obama clearly promised to work toward empowerment of some of the traditionally voiceless, usually not referred to in inaugural speeches. Obama also raised in a forceful way the problem of climate change. The President, without raising specifics, clearly articulated a progressive agenda for the next four years that we on the left should organize around.

In addition, there are signs that the Obama election organization is being transformed into what could become part of a social movement to support a progressive agenda in the Congress. Organizing for Action (OFA) promises to take the resources, human and financial, that were mobilized during the campaign to build constituencies to work on issues and campaigns in Congressional districts.

Skeptics correctly suggest that OFA may serve more to channel and control growing militancy at the grassroots rather than unleash it. However, those of us at the base can use the OFA format and resources as part of our own organizing.

Organizing at the grassroots in communities and states is particularly critical in the 30 states in which government is dominated by Tea Party and other conservative elected officials. And it is in these states and communities that outside money has poured in to reverse institutions and policies that service human needs. In many of the states, such as Indiana where I live, advocates for reaction have gained an upper hand and threaten public institutions, social programs, and democratic representation.

We, the left/liberal community, stepped back from activism after the 2008 election assuming that the new President would advance a people’s agenda. We were wrong. He adopted a cautious and pragmatic strategy incorrectly assuming he could achieve compromise policies with Republicans and Blue Dog Democrats. In 2010, a new group of Republicans opposed to virtually all public institutions, the so-called Tea Party Republicans, gained many seats in Congress, state legislatures, and governorships.

After the 2012 election the same progressive forces which withdrew from political combat after 2008 and sat out the 2010 elections mobilized to reelect the President in 2012. Since last November they have proclaimed that they will not become passive again.

We must stand for human progress inside the legislative/executive arena and everywhere in the public sphere. We must stand up for the populist agenda candidate Obama proposed in 2008 — and was hesitant to deliver on — and that he has articulated in his 2013 inaugural speech.

In short, we in labor, women’s, African-American, Latino, environmental, and civil liberties groups must build a coalition that recognizes that we share common needs and goals. We must realize we are all victims of an economic and political system that rewards the few at the expense of the many.

How do we come together? How should we relate to the electoral arena, in our communities and states? Should we work in the Democratic Party? A progressive segment of it and/or a third party? When and where should we protest? Can we begin to construct alternative institutions? How can we spread our messages through the media — print, electronic, public performance?

Perhaps most important is the question of our vision of the future. What kind of society would we want to create? How can we achieve economic and political justice for all? These are heady questions but they can only be answered if we act together.

As inspired by the Rebuild the American Dream campaigns and Occupy movements of 2011 we can begin to dialogue anew about building movements in our communities, identifying a range of issues to work on together, and, ultimately advancing our states and society toward economic and social justice.