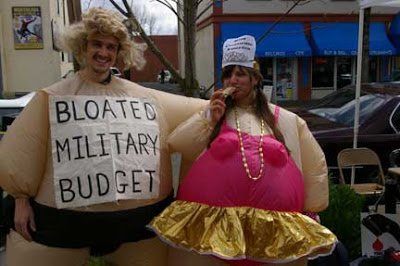 Now is a good time for peace activists to expand education about the history of unchallenged military spending… A progressive peace majority might be ready to listen and act.

Like a festering cancerous growth that has not been exorcised from the body politic for over 60 years, militarists continue to defend escalating military spending. This time it is former Vice President Dick Cheney visiting Washington to encourage his fellow Republicans in the House of Representatives to stand tall and oppose any cuts in military spending.

Of course, military imperatives have a long history. NATO was formed in 1949 and the United States militarily and financially was its anchor. National Security Document 68 in 1950 called for military spending to be every president’s top priority. With subsequent “crises” in Korea, the Persian Gulf, the Caribbean, Indochina, Southern Africa, Iraq, and Afghanistan, military spending continued to grow, taking up about half of all discretionary government spending.

Anticipating changes in challenges to U.S. global hegemony, President Carter in 1980 called for the establishment of a “Rapid Deployment Force” which could quickly move into trouble spots to address threats to allied regimes. Such a RDF might have prevented the overthrow of the Shah of Iran, Carter’s advisers argued. President Reagan, of course, boosted military spending beyond the costs of the entire historical period before he came into office. And President Clinton, remained committed to being able to fight one and half wars and to be able to engage in “humanitarian interventions.”

The Bush Administration began a shift in defense doctrine even before the 9/11 tragedy was used to justify two huge, long, and unwinnable wars. Defense intellectuals warned of an “arc of instability” all along the equator from the northern portion of Latin America, to North Africa, the Persian Gulf, and East Asia. With this new threat the military needed to be transformed into a new high speed force to move on a moment’s notice to any threatened area; a new high tech RDF.

After 9/11 the Bush Doctrine considered any military action as justified if the U.S. perceived that an enemy, state, or non-state actor might be considering an attack on the United States. The new high tech RDF required literally hundreds of military installations on every continent. Given the new technology, these bases did not have to be mini-cities like the old Cold War military installations of the past. And as Chalmers Johnson, Nick Turse, and others have documented, close to 1,000 military bases were in place before Bush left office.

David Vine, an anthropologist, (“The Lily-Pad Strategy: How the Pentagon Is Quietly Transforming Its Overseas Base Empire and Creating a Dangerous New Way of War,” at TomDispatch.com , July 17, 2012) uses an interesting metaphor, the lily-pad, to describe the latest generation of U.S. global military bases. The metaphor, Vine says, comes from the military who conceptualize bases as lily-pads, where like frogs, troops alight then jump across a pond to attack their prey. Vine describes the “lily-pads” as “small, secretive, inaccessible facilities with limited numbers of troops, spartan amenities, and prepositioned weaponry and supplies.”

He points out that while hundreds of bases in Iraq and Afghanistan are being closed, the lily-pads are expanding. Consequently, the U.S. today still has some kind of military presence in 150 countries on every continent, 11 aircraft carrier task forces, and untold space-based military capabilities. So while the troops are being brought home, unbeknownst to the American people, the U.S. global military presence is growing.

Beyond their military utility, the lily-pads and other forms of power projection are also political and economic tools used to build and maintain alliances and provide privileged U.S. access to overseas markets, resources, and investment opportunities.

Although this story is not new, Vine suggests that opposition to military doctrine and spending is growing, an opposition that peace activists might use.

A recent survey sponsored by the Program of Public Consultation, the Stimson Center, and the Center for Public Integrity reinforces the argument Vine is making about military spending. In April 2012 a representative sample of respondents from Democratic and Republican (Blue and Red) districts were asked their opinions about cutting military spending in 2013. Respondents were given arguments in support of and opposition to such spending before they answered questions.

The director of the Program for Public Consultation, Steven Kull, said that, “The idea that Americans would want to keep total defense spending up so as to preserve local jobs is not supported by the data.”

Perhaps more Americans than one expects are aware of the fact that military spending, as economists have claimed, is a job killer. United For Peace and Justice, advocating active opposition to reversing the military spending cuts agreed to by Congress in 2011, has pointed out that $1 billion in government spending for the military creates 11,200 jobs, while an equal amount spent for creating clean energy would create 16,800 jobs, and education 26,700 jobs.

Now is a good time for peace activists to expand education about the history of unchallenged military spending, continued military basing all across the globe, the use of high technology and mobile troop formations to intervene everywhere, the consequences of military spending for making the world a more dangerous place, and the costs, not only in lives overseas but to a basic standard of living at home. The survey data indicates that a progressive peace majority might be ready to listen and act.