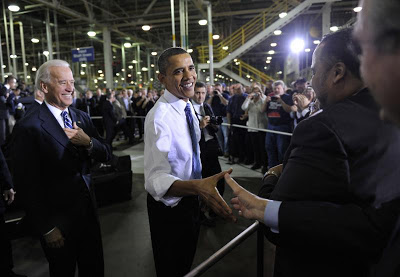 At the east end of town, at the foot of the hill
Stands a chimney so tall that says “Aragon Mill.”
But there’s no smoke at all coming out of the stack.
The mill has shut down and it ain’t a-coming back.

Well, I’m too old to work, and I’m too young to die.
Tell me, where shall we go, My old gal and I?
There’s no children at all in the narrow empty street.
The mill has closed down; it’s so quiet I can’t sleep.

On a cold and sunny Tuesday morning Air Force One flew into the Grissom Air Base just north of Kokomo, Indiana, carrying President Barack Obama and Vice President Joe Biden. Just two days before Thanksgiving the presidential team had programmed a trip to highlight job stimulus successes in this declining factory town in North Central Indiana. Democratic leaders, outgoing Senator Bayh, and Congressman Joe Donnelly were part of a delegation to welcome the visitors.

According to press reports, bigger welcomes than from politicians were noted among Kokomo UAW workers and children from local elementary schools. Kokomo is one of Indiana’s small manufacturing towns dominated by the auto industry (along with Anderson, and Indianapolis).

Kokomo, with a population of only 46,000, houses 10 parts plants operated by General Motors, Chrysler, and Delphi. As recently as 1990 Indiana was ranked tenth in union density, largely due to auto and steel plants around the state. Kokomo’s UAW Local 685 played a pivotal role in the campaign to pressure Indiana Congressmen to vote “no” on NAFTA in 1994.

Because of declining manufacturing and the crisis in the auto industry, unemployment in Howard County (where Kokomo is located) topped out at 20.4 per cent in June, 2009. With the federal program to save the auto industry and various stimulus packages to save local jobs, including Kokomo fire stations, unemployment has been cut to 12.7 per cent. Jerry Price, president of UAW local 685 representing three Chrysler transmission plants pointed out that “The bailout has meant the survival of Kokomo.”

The White House reported that a Recovery Act grant of $89 million helped open a plant to make parts for hybrid vehicles. Also Chrysler invested $300 million in transmission plant renovation leading to the retention of 1,000 jobs. In addition, government funds stimulated the opening of 12 new businesses in the city’s downtown, including Sweet Poppins, a popcorn shop.

Tashia Johnson-St. Clair, the shop’s owner, said the downtown area used to be like a ghost town. After the government funds stimulated new businesses downtown, she said: “It’s absolutely beautiful. It looks like a scene off a TV show.”

The Kokomo Tribune noted in muted terms the general appreciation of Kokomo residents for the government’s job saving and creation programs:

The workers, many of whom undoubtedly voted to end the president’s Democratic House majority two weeks ago, applauded the speech, particularly when both Obama and Biden referenced the news that the American automakers are gaining market share for the first time in 24 years.

Critics of the Obama/Biden visit

Not every Hoosier politician or activist appreciated the presidential visit or the policies it was trumpeting. Governor Mitch Daniels was too busy to attend the Kokomo celebration. Indiana state party chairman Murray Clark said that members of the presidential team “are here today to cherry pick a single success story: at worst, it further proves how out of touch this administration is with an electorate that sent a clear message on Nov. 2.”

Local Tea Party activists condemned Obama’s stimulus policies arguing that businesses should be allowed to fail, rather than “throwing money” at them. (Labor activists have concluded that Kokomo would have been destroyed as a city without the emergency assistance.)

Perhaps the most telling commentary appeared in an editorial in the Lafayette Journal and Courier on Monday, November 29, 2010. It denied that Kokomo’s economic rejuvenation should be seen as an indicator of a more general economic recovery. The editorial reminded readers that Kokomo still had almost 12 per cent unemployment and the state and nation close to 10 per cent unemployment.

The Journal and Courier argued that the accolades and pep talks provided by Obama and Biden were misguided. What the president should have done was to “discuss how he planned to work with a Republican-controlled House of Representatives to reach compromises for job creations… Tuesday’s visit was a missed opportunity for Obama to celebrate Chrysler’s investment in Kokomo while reassuring workers across the country how he planned to create jobs working with a split Congress.”

As the song says, “The mill has shut down: it’s the only life I know.” Under capitalism production and reproduction of life requires work — wage labor — for most people. Jobs are central to life. But in an era of financialization and economic crisis jobs are declining, workers are pitted against each other worldwide to work for less, and with declining incomes demand for products declines. Towns and cities are destroyed by lack of investment. The industrial base of the Midwest has been in decline for years. Whole regions of countries have experienced economic devastation. And employed workers everywhere live in fear for their economic security.

Government stimulus packages don’t resolve the growing contradictions between the shift toward jobless economies, declining wages, and reduced demand for goods and services. But they do provide relief for those who suffer. Kokomo, Indiana, is a success story. It needs to be replicated all around the country. And tales of successes need to be heralded from coast to coast.

The political dilemma, however, is reflected in the newspaper editorial cited above. Critics of government efforts to create and maintain jobs, such as reflected in this editorial, rather than encouraging greater efficiencies and improvements in government programs, demand the Obama administration “reach compromises” with political opponents who have made it clear they will never work with the administration.

The dilemma the Kokomo story poses for progressives is how to force the administration and its allies in Congress to fight for job creation programs in the face of an opposition that is inalterably opposed to these goals.