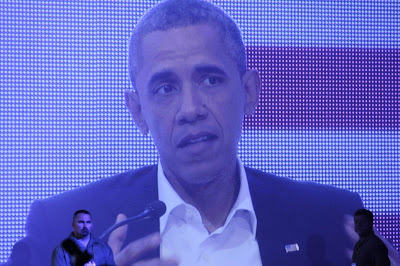 Latin America’s rejection of U.S. diplomatic dominance at the Cartagena, Colombia, summit signifies the decline of U.S. power in the region.

The 2012 Summit of the Americas ended Sunday, April 15, without a closing statement as is traditional. In fact, it ended with acrimony.

Countries with political regimes as varied as Colombia, Brazil, and Bolivia condemned the refusal of the United States to formally recognize Cuba, thus allowing that country to attend. Rafael Correa, president of Ecuador, did not even attend the summit to protest Cuba’s exclusion. By the end of the meeting, Evo Morales, Bolivian President, made it clear that no future summits would occur if Cuba were not included.

Along with political conflict between the United States and Canada and the rest of the Hemisphere countries over Cuba, most rejected the decades-long violent and destructive “war on drugs” launched by the United States in the twentieth century to maintain a rationale for a pervasive military presence in the region.

Also, President Cristina Fernandez of Argentina left the meeting early to protest the lack of U.S. support for her country’s claims on the Malvinas Islands.

The Summit of the Americas was launched in 1994 by President Clinton to advance Hemisphere diplomacy beyond the traditional regional organization, the Organization of American States. Clinton and George Bush used the summits to lobby for a Hemisphere-wide free trade agreement, a North America Free Trade Agreement, writ large.

In 2003, the former Brazilian President, Luiz Inacion Lula da Silva, demanded that the United States end farm subsidies for U.S. products before Brazil would consider a trade agreement. Subsequently Brazil joined forces with Russia, India, and China (the BRICs) to challenge the hegemony of the United States, Western Europe, and Japan in the global economy.

While visible global political/military contests in the twenty-first century centered in the Middle East and the Persian Gulf, significant changes have been occurring in Latin America. A continent pillaged by Spain, Britain, France, Portugal, and the Netherlands for hundreds of years has been doggedly moving towards political autonomy and economic independence.

Colonialism came to an end with the Spanish/Cuban/American war in 1898. In its place, the United States established neocolonial control over the politics and economics of virtually every country in the Hemisphere. At first, from 1898 until 1933, the U.S. maintained control through repeated military interventions (over 30 in 35 years with long marine military occupations of Haiti, Cuba, and Nicaragua).

From the 1930s until the 1980s, U.S. control was maintained by putting in place and supporting military dictatorships in such countries as Argentina, Brazil, and Chile. During the time Reagan, Bush senior and Clinton were in office, control was enhanced by so-called “neoliberal” economic policies. These demanded of countries, increasingly tied to international banks by crippling debt, the creation of open markets, foreign economic penetration, and reduced domestic spending for its own citizens.

During the years of dictatorship and neoliberalism, the primary example of resistance to U.S. economic imperialism and militarism was Cuba. For that reason, the United States put in place a policy of diplomatic isolation, an economic blockade, and a 50-year campaign to subvert and overthrow the revolutionary government.

As the 2012 election season approaches, presidential candidate Barack Obama, apparently felt he could not buck the declining but still influential counterrevolutionary Cuban Americans of South Florida, despite what Latin America thinks.

Latin America’s rejection of U.S. diplomatic dominance at the Cartagena, Colombia, summit signifies the decline of U.S. power in the region. The power of the newly formed Bolivarian Alliance for the Peoples of Our America (ALBA), an organization promoting economic and political cooperation in the region constitutes one kind of challenge to the United States. Another is the trade regime, Common Southern Market or Mercosur, which has a membership of Argentina, Brazil, Paraguay, Uruguay (with membership of Venezuela in process, and associate membership status for Bolivia, Chile, Colombia, Ecuador, and Peru.

Hal Weitzman documents in Latin Lessons: How South America Stopped Listening to the United States and Started Prospering (Wiley, 2012) Latin America’s growing relationships with China and to a lesser extent Europe. He identifies a troubling contradiction in the U.S. regional relationship:

And finally, in advance of electoral shifts to the Left in the region, mass organizations all around the Hemisphere have emerged based on class, gender, and race. Also indigenous people struggling to keep their land in the face of expropriation by multinational corporations have risen up, even against what they regard as oppressive policies of populist regimes.

The World Social Forum, launched as a dialogue among the poor and oppressed in Porte Alegre, Brazil, in 2001, was a forerunner of the Occupy movements of our own day.

In short, the rejection of United States policies at the summit signifies the fundamental transformation of U.S/Latin American relations. The winds of change are becoming gusts.