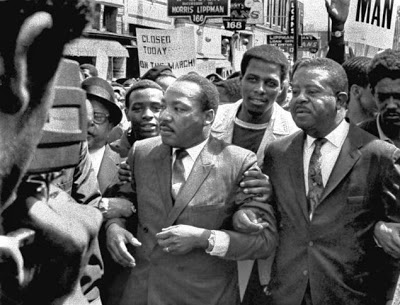 Martin Luther King and the
civil rights and labor alliance

King knew that black and white workers’ struggles for economic justice were indivisible; that civil rights could not be realized in a society where great differences in wealth and income existed…

Dr. Martin Luther King arrived in Memphis on March 18, 1968 to support the sanitation workers of that city who had been on strike for five weeks. These workers had many grievances that forced them to protest.

Garbage workers had no access to bathroom or shower facilities. They were not issued any protective clothing for their job. There were no eating areas separate from garbage. Also sanitation workers had no pension or retirement program and no entitlement to workers compensation. Their wages were very low.

Shortly before the strike began two workers died on the job and the families of the deceased received only $500 in compensation from the city. Finally, after Black workers were sent home for the day because of bad weather and received only two hours pay they walked off the job.

On March 28, 10 days after King arrived, violence disrupted a march led by him. He left the city but returned on April 4 to lead a second march. On that fateful April day, King told Jerry Wurf, president of the American Federation of State, County, and Municipal Employees or AFSCME: “What is going on here in Memphis is important to every poor working man, black or white, in the South.” That evening Martin Luther King was killed by a sniper’s bullet.

It was logical for King to be in Memphis to support garbage workers. Despite a sometimes rocky relationship between the civil rights and labor movements, King knew that black and white workers’ struggles for economic justice were indivisible; that civil rights could not be realized in a society where great differences in wealth and income existed, and where life expectancies, educational opportunities, and the quality of jobs varied by class, by race, and by gender.

The more progressive and far-sighted leaders and rank-and-file union members in the AFL-CIO knew it too. At the time of King’s death working people were coming together to struggle for positive social change around the banner of the Poor People’s Campaign.

Dr. King’s thinking on the need for an alliance between the civil rights and labor movements was expressed many times. As far back as 1957 at a convention of the United Packinghouse Workers of America (UPWA) he asserted that “organized labor can be one of the most powerful instruments in putting an end to discrimination and segregation.”

During an organizing effort of the Hospital Workers Local 1199 in the fall of 1964, King was a featured speaker at a fundraising rally. He said of the 1199 struggle,

Your great organizing crusade to win union and human rights for New Jersey hospital workers is part and parcel of the struggle we are conducting in the Deep South. I want to congratulate your union for charting a road for all labor to follow-dedication to the cause of the underpaid and exploited workers in our nation.

Shortly after, Dr. King left a picket line of Newark hospital workers on strike to fly to Oslo, Norway, to receive the Nobel Prize.

Upon his return from Norway, King returned to the picket line; this time in support of Black women workers of the Chemical Workers union at the Scripto Pen Plant in Atlanta. He said there: “Along with the struggle to desegregate, we must engage in the struggle for better jobs. The same system that exploits the Negro exploits the poor white…”

At the Negro American Labor Council convention of June, 1965, King called for a new movement to achieve “a better distribution of wealth within this country for all of God’s children.” In February, 1966, King spoke to Chicago labor leaders during his crusade for the end to racism and poverty in that city. He called on the labor movement which had provided techniques and methods, and financial support crucial to civil rights victories to join in the war on poverty and slums in Chicago.

Such an effort in Chicago, he said, would show that a Black and labor alliance could be of relevance to solving nationwide problems of unemployment, poverty, and automation.

One year before his death, King spoke at another meeting of Hospital Workers 1199. He said a closer alliance was needed between labor and civil rights activists to achieve the “more difficult” task of economic equality. The civil rights movement and its allies were moving into a new phase to achieve economic justice, he announced. This would be a more formidable struggle since it was in his words “much more difficult to eradicate a slum than it is to integrate a bus.”

In early 1968, Dr. King incorporated his opposition to the Vietnam War with his commitment to economic justice. He called for an end to the War and the utilization of societal resources to eliminate poverty. To those ends the Poor People’s Campaign was launched. It demanded jobs, a guaranteed annual income for those who could not find work, the construction of 6 million new homes, support for employment in rural areas, new schools to train jobless youth for skilled work, and other measures to end poverty.

While preparing the Poor People’s Campaign, King got a call to go to Memphis. Before leaving he sent a message to be read at the seventh annual convention of the Negro American Labor Council. He wrote that the Council represented “the embodiment of two great traditions in our nation’s history: the best tradition of the organized labor movement and the finest tradition of the Negro Freedom Movement.” He urged a black-labor alliance to unite the Black masses and organized labor in a campaign to help solve the “deteriorating economic and social conditions of the Negro community… heavily burdened with both unemployment and underemployment, flagrant job discrimination, and the injustice of unequal education opportunity.”

Forty years later the social and economic injustices of which Dr. King spoke continue. But so does his vision of a working class movement united in struggle to survive, a movement of Blacks, whites, and Latinos, men and women, young and old, and organized and unorganized workers.

The times have changed but the importance of Dr King’s political vision remains.

A version of this article was first published on January 13, 2009, at Diary of a Heartland Radical.