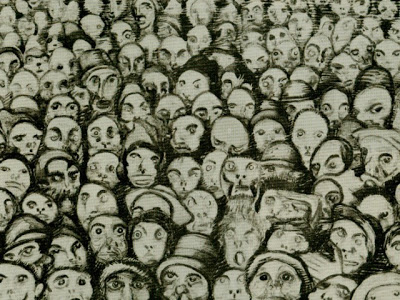 The multitudes: “Cry of the Masses” by Josef Vachal. Image from Express Tribune blogs.
Sound bites:
Drones, banks, and multitudes

Drones refer metaphorically to state-directed murder, often using the latest technology to target and assassinate those who have been defined by officials as the enemy or as threats to society, or just plain criminals.

Based on recommendations by key decision makers, civilian, military, and police, the U.S. has increasingly relied on new high-tech instruments of murder. Drones, smart bombs, and chemicals are used to kill, maim, and disable people abroad and at home with little or no threat to the safety of the personnel pushing the buttons, dropping the bombs, or spraying the victims.

These newer forms of murder continue to be paralleled by a variety of police beatings and shootings and executions sanctified by governments attributing crime to the poor and people of color. The 21st century nation-state, to paraphrase sociologist Max Weber’s original definition, is the organization that holds the monopoly of the “legitimate” implementation of murder.

Banks are real but as symbols refer to a capitalist economic system that organizes workers to generate wealth which is increasingly appropriated by the few. In reality, the industrial revolution of the nineteenth century saw huge manufacturing corporations mobilizing working classes and stealing the wealth that they produced. When rates of profit began to decline the corporate elites collaborated with the heads of banks, institutions which at one time served as the accountants and vaults for accumulated profits.

Great mergers of manufacturing and banking capital in the early twentieth century and more so since the 1970s contributed to a new kind of capitalist economy based on finance. Most transactions now are speculative: buying and selling stocks and bonds, the creation of hedge funds, and real estate and insurance investments.

Banks and investment houses are global. They produce enormous profit without creating useful products for people to use or consume. And, the banking metaphor represents a vision of an economic system that has become grotesquely unequal.

The third metaphor, the multitudes (borrowed from abstract formulations by Italian theorist Antonio Negri) refers to the rising up of masses of people — the traditional working class, the unemployed, youth without hope, youth with vision, women long oppressed, people of all races, and people who clean streets or live on them, serve coffee at Starbucks, and even write software programs for big corporations.

The multitudes, Negri suggests, represent the underside of a new global order, an economic empire that traverses the earth bursting out of its national and sovereign boundaries.

Drones and banks represent both the coercive and the manipulative power of capitalism. Americans see examples of each on television or computer screens every day. In recent weeks U.S. drones killed U.S. citizen Anwar Al-Awlaki in Yemen. Troy Davis, despite evidence raising reasonable doubt that he was guilty of a murder, was executed by the state of Georgia. And, the Bureau of the Census reported the rise of rates of poverty not seen in the United States since the 1990s and numbers of persons living in poverty larger than any time since the 1960s.

What is also becoming a regular feature of our electronic experience is resistance, anger, and collective mobilization. This is occurring all across the globe — Arab spring; student protest in Santiago, Chile; angry Israeli citizens; workers in Athens, Greece; students and public workers in Madison, Wisconsin, Columbus, Ohio, and Indianapolis, Indiana — and now undifferentiated groups occupying Wall Street and metaphorical Wall Streets around the United States.

It is unclear what will come of all of this except that the contradictions between drones and banks versus the multitudes is becoming more clear and that the transformation of society that is so desperately needed just might be emerging. Hope so.