Harry Targ : From the Bay of Pigs to the Missile Crisis / 1 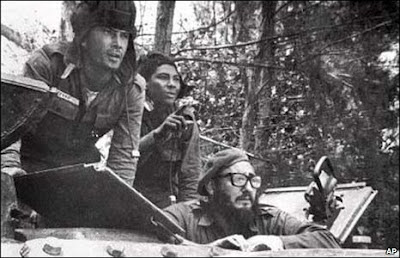 Fidel and comrades during Bay of Pigs invasion, 1961. Photo by Raul Corrales / AP.
The Cuba story, Part 1:
The Bay of Pigs to the missile crisis

As U.S.-Cuban economic and diplomatic tensions were escalating, President Eisenhower made a decision that in the future would lead the world to the brink of nuclear war.

[Part one of three.]

The 50-year anniversary of the Cuban Missile Crisis is approaching. In an introduction to the presentation of new documents on the crisis, the National Security Archives warned that “the combination of nuclear weapons and human fallibility will eventually result in nuclear destruction if these weapons are not abolished”

The historical record shows that the decisions leading to the crisis which almost brought nuclear war have been repeated over and over again since the early 1960s. Particularly, the Kennedy Administration pursued numerous policies to forestall revolutionary ferment in the Western Hemisphere. These included covert military action, economic assistance, and nuclear confrontation with the Soviet Union.

My next two essays will address these policies. They are adapted from my book on United States foreign policy during the Cold War (Strategy of an Empire in Decline: Cold War II. (1986)

Before Fidel Castro’s 26th of July Movement seized power in Cuba in January 1959, the United States had long controlled the island nation 90 miles from its shores. The country was ruled by the dictator Fulgencio Batista, a close ally of the United States, who, through repression and corruption, generated large-scale opposition in the countryside and the cities.

In 1958, the State Department urged Batista to turn control over to a caretaker government to forestall the victory of Fidel Castro, Che Guevara, and Camillo Cienfuegos, and their growing guerrilla armies that were on the verge of overthrowing the dictator. Batista rejected the pressure to flee. His U.S.-backed armies and police were defeated. The revolutionaries were victorious.

Forty percent of the Cuban population was illiterate, most Cubans spent much of their income on rent, and among wealthy Cubans, 1.5 percent of landowners owned 46 percent of the land.

When the Castro-led revolutionaries assumed office, they began to develop a series of policies to alleviate the worst features of Cuban poverty. The revolutionary government invested in housing, schools, and public works. Salaries were raised, electrical rates were cut, rents were reduced by half. On a visit to the United States in April 1959, Castro, who had proposed a large-scale assistance program for the Western Hemisphere to the Eisenhower Administration, was ignored by the President.

Returning from a hostile visit to Washington, Castro announced a redistributive program of agrarian reform that generated opposition from conservative Cuban and American landowners. These policies involved transfers of land to the Cuban people from the huge estates owned by the wealthy. The Eisenhower administration responded by reducing the quantity of United States purchases of Cuban sugar. Cuba then nationalized the industry.

In February 1960, Cuba signed trade agreements with the Soviet Union. The Soviets agreed to exchange their oil for sugar no longer purchased by the U.S. When the U.S. owned oil refineries refused to refine the Soviet oil, the Cuban government nationalized them.

In July 1960, the U.S. cut all sugar purchases. Over the next several months the Cuban government nationalized U.S. owned corporations and banks on the island. Therefore, between the spring of 1960 and January 1961, U.S. and Cuban economic ties came to a halt and the island nation had established formal diplomatic relations with the Soviet Union.

Shortly before Eisenhower left office, the break was made symbolically complete with the U.S. termination of formal diplomatic relations with Cuba.

As U.S.-Cuban economic and diplomatic tensions were escalating, President Eisenhower made a decision that in the future would lead the world to the brink of nuclear war. In March 1960, he ordered the Central Intelligence Agency to create a Cuban exile force that would invade the island and depose Fidel Castro. Even the State Department knew at that time that Castro was enormously popular.

In April, 1961, the newly elected President Kennedy was presented with an invasion plan by the CIA. The agency claimed that the right-wing Cubans would be greeted as heroes when they landed at the Bay of Pigs. After the Castro regime was overthrown, all private assets would be returned, and a Batista-like government would be reestablished.

The Bay of Pigs invasion, April 17-19, 1961, was launched by 1,500 Cuban exiles. It was an immediate failure: 500 invaders were killed and the rest captured. No uprising against the revolutionary government occurred. Kennedy was criticized in the United States for not providing sufficient air support to protect the invading army. The critics ignored the fact that the revolutionary government had the support of workers and peasants who would fight to defend it.

After the invasion attempt failed, President Kennedy warned of the danger of the “menace of external Communist intervention and domination in Cuba.” He saw a need to respond to Communism, whether in Cuba or South Vietnam. In the face of perceived Communist danger to the Western Hemisphere he reserved the right to intervene as needed. The lesson he drew from the Bay of Pigs was the need for escalated adventurism, not caution.

In the second part of this series, we will describe a desperate effort to challenge the influence of the Cuban revolution by establishing an economic assistance program for the Hemisphere. The final essay will describe the events that led the world to the brink of nuclear war, the Cuban Missile Crisis.