Harry Targ : Fundamentalism and the Attack on Planned Parenthood 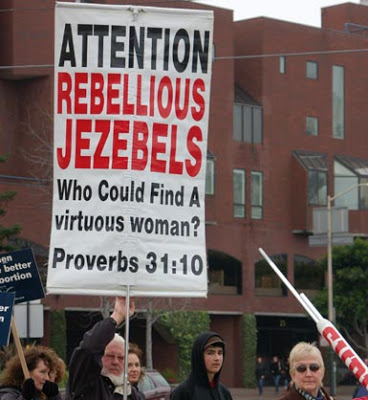 Image from Feministe.
In the fundamentalist tradition:
The attack on Planned Parenthood

Vivay Prashad, in his fascinating book, The Darker Nations, traced the rise and subsequent demise of the Third World Project from the 1950s to the 1980s. The Third World Project, mainly the mobilization of poor and marginalized peoples around the world, envisioned the construction of progressive governments that would provide for basic social and economic needs and institutionalize democratic participation in political life.

This project was derailed for several reasons. One of the most significant was the willful construction by threatened elites of fundamentalist religious institutions.

In the Middle East, the tottering dictatorships plowed financial resources into the creation of fundamentalist Islamic organizations. “Political Islam” was introduced into global political culture to divert and divide social movements for fundamental change.

Political Islam called for a return to the past and a rejection of modern secular ideas about social and political institutions. Religious dogma worked to replace visions of egalitarian societies. Ironically, in order to maintain stability, United States foreign policy supported insurgent Islamic fundamentalist movements in various places such as Afghanistan.

In Latin America, religious fundamentalism took a variety of forms. The leadership of the Catholic Church launched a frontal assault on newly created radical regimes, such as in Nicaragua, that based their political principles on a theology of “liberation.” Also, evangelical Christian organizations, with funding from worldwide economic elites, infiltrated Latin American countries experiencing revolutionary ferment, urging the poor to reject earthly solutions to their problems.

In North America, the religious right mobilized financial resources to appeal to an electorate frustrated by challenges to U.S. hegemony overseas and economic stagnation at home. In each political venue, whether dominated by Islam, Christianity, or Judaism in the case of Israel, religion was used to divide and conquer.

The sector of the population most impacted by fundamentalisms of every kind is women. Women are forced out of the political process as patriarchies reinstitute top-down control of their political, economic, and cultural lives and their bodies. Women’s institutions, particularly ones that encourage progressive public policies, are marginalized.

Often politicians using religious dogma as their rhetorical tool, support public policies that punish poor women, women of color, and progressive women in general. In sum, the resurgence of religious fundamentalism has been used to divide majorities of people along various lines that defuse their solidarity and the targets of such assaults are most often women.

A current example of this strategy of attacking women by raising the specter of religious orthodoxy occured Friday, February 18, when the House of Representatives approved an amendment to budgetary legislation that would end all funding of Planned Parenthood, a national organization that provides vital reproductive health services to low-income women.

Congressman Mike Pence (R-IN), who introduced the proposal, declared that American taxpayers should not have to pay for abortions. He failed to mention that they don’t because the government currently forbids the use of federal dollars for most abortions. Consequently, that could not have been the motivation for this legislation.

Rather, most of the 240 House members who voted to cut all allocations to Planned Parenthood wished to raise the religious issue to justify their general goal of ending public health care and guarantees for basic public health services for all. Pence failed to make note of the fact that Planned Parenthood gives contraceptive assistance to poor women, does HIV tests, screens women for cancer, and provides reproductive health care for women.

Data from the Guttmacher Institute points out that in recent years almost half of women who need reproductive health care are not able to afford it. Four in 10 women of reproductive age have no health insurance.

How to do it? Transform the discourse from providing health care for the people, a broadly accepted idea, to religious dogma, in this case anti-abortion dogma.

It is time for progressives to respond. Attacks on Planned Parenthood are attacks on the working class, especially people of color, and women, and the very idea that governments are created to serve the needs of the people.