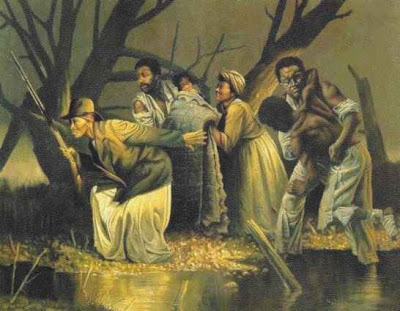 The riverbank will make a very good road,
The dead trees show you the way.
Left foot, peg foot traveling on,
Following the drinking gourd.

(Old song directing slaves on their escape, in modern times popularized by Pete Seeger and the Weavers)

“Dad, didn’t you ever go to elementary school?”

I just returned from an inspiring two-day trip to southern Indiana and Ohio, visiting three sites along the Underground Railroad. I was familiar with the history of African Americans’ active resistance to slavery, such as armed revolts, and forms of passive resistance, including purposive manipulations of master/slave relationships.

However, my knowledge of the underground flights to freedom was limited.

In the 17th and 18th centuries, as many school kids know, slaves fled the plantation dictatorships to travel north to so-called “free states.” They continued their journey to Canada where slavery was outlawed. In 1850, the controversial Fugitive Slave Law passed Congress which strengthened the hand of slaveholders in their efforts to stop the Underground Railroad. It declared that although slavery was prohibited outside the South, slaveholders and bounty hunters could travel north to retrieve their human “property.”

Escaping slaves, therefore, could not regard themselves as secure until they reached Canada.

While the flight of slaves was largely unplanned, African American slave society was replete with secret directions for escape transmitted through songs such as “Follow the Drinking Gourd” and “Go Down Moses.” Even the quoting of certain scripture in Black churches was designed to give information on routes to the North and possible safe houses to seek. The courage, creativity, and will to freedom of the slaves were extraordinary.

A trail of safe houses in the “free” state of Ohio was created to give runaway slaves sanctuary, food, and directions for moving further north, ultimately to Canada. Ohio was north of the Ohio River, and Kentucky on the river’s southern banks was still a slave state.

Safe houses existed in Indiana, Michigan, and elsewhere in the Midwest and the East. Those providing sanctuary were both white and Black abolitionists. In Ripley, Ohio, John Rankin, a white Presbyterian Minister and long-time abolitionist, and John Parker, a former slave and local entrepreneur, risked their livelihoods and their physical security to provide safe havens to fleeing slaves.

In the 1850 Fugitive Slave Law it became a crime for northern abolitionists to provide such sanctuary. Northerners were obliged by law to cooperate with slaveholders, blood thirsty bounty hunters, and local law enforcement officials in the brutal kidnapping of those who sought their freedom.

In my travel along the Underground Railroad, a trip that ended at the exciting new museum in Cincinnati, the National Underground Railroad Freedom Center, I learned about the ingenuity of the runaway slaves and the abolitionists in their construction of this long road to freedom.

Much of the story of the Underground Railroad has only been reconstructed in the last 30 years or so. The paths to freedom embarked upon by the slaves, their level of organization, and the numbers of those who tried to escape and who succeeded remain unclear as do the names and activities of abolitionists.

Information at the time about the Underground Railroad, of necessity, was shrouded in secrecy for reasons of security and for the most part narratives of the trials and tribulations of slaves and abolitionists come from memoirs of abolitionists written after the Civil War.

Historians debate any number of elements of the story of the Underground Railroad. But the historical narrative that I experienced on a simple guided tour left a deep impression on me, particularly on what seems to me to bear relevance to our continuing work today.

Contrary to paternalistic accounts of the slave system that many of us were exposed to as children, the slaves, against all odds, were courageous and possessed an extraordinary ingenuity. Slave society was built on a profound level of human solidarity such that the successful flight to freedom of each and every slave was built on the common struggles of entire communities.

Language, songs, community leaders such as “the old man waiting for to carry you to freedom,” and the sacrifices of men and women to get some of their kin “over Jordan” were the collective responsibility of every family and community.

Abolitionists, white and Black, refused to accept the slave system. They were willing to put their lives on the line to oppose an oppressive and immoral system.

Quakers, Presbyterians, and people of other faiths deemed slavery an immoral system that contradicted God’s law. For them, the laws of society, such as the Fugitive Slave Law, were superseded by God’s law. And still others, mostly the Black abolitionists, combated the slave system because they experienced it directly and because it was their brothers and sisters who suffered under its yoke.

Examining the slave system and the laws that gave it sustenance suggests a perverse feature of the U.S. constitutional system. Throughout U.S. history, and particularly during the period of slavery, the Constitution and the political system have, on the one hand, opposed immoral laws such as the Fugitive Slave Law, and, on the other hand, accepted them because of the necessity of political “compromise.”

The Fugitive Slave Law was the result of compromise dictated by demands from pro-slavery advocates in contention with anti-slavery advocates. California would be admitted into the federal union as a free state at the same time that southern bounty hunters would be allowed to enter “free” states and kidnap runaway slaves. Ohio was a free state but slave owners, or their henchmen, could lawfully enter the state to retrieve their “property.”

The United States political system has been based on this system of “compromise.” Abolitionists said “no” to what was seen as compromise. They viewed the Fugitive Slave Law as hypocrisy.

The Supreme Court in Roe v. Wade in 1973 declared that women have the right to control their own bodies, but health care services are denied to them if they make certain choices. Moreover, health care workers risk death if they provide services that are guaranteed by the Constitution as interpreted by the Supreme Court.

In the 19th century slavery was outlawed in Northern states but slave holders and bounty hunters could kidnap former slaves to be brought back to their owners.

Second, there is a continuity in the flight to freedom from slavery to the present. In the 1980s, during the Reagan wars on Central America, refugees came north to avoid death squads or because of desperate economic circumstance. Central American activists in the United States risked arrest providing sanctuary for those fleeing repression.

Today, modern day bounty hunters, federal agents, and local police pursue immigrants, defined as illegal, who were driven from their homes by global economic policies. They are often kidnapped, detained, and deposited in their home countries irrespective of the local circumstances. The anti-immigration movement and draconian state laws such as those in Arizona are contemporary variants of the story of the Fugitive Slave Law.

On the other hand, resistance, in the best of the tradition of the Underground Railroad, continues as those most victimized rise up to seek their freedom. They work in solidarity with political progressives in common struggle to create a better world for economic and social justice, and for freedom.

It is an old story: “Follow the drinking gourd.”

1 Response to Harry Targ : Lessons from the Underground Railroad