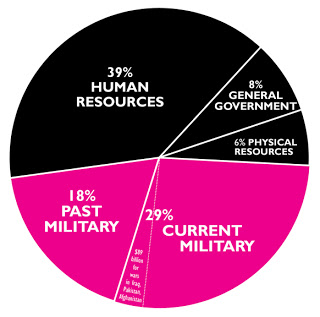 Breakdown of projected government spending for fiscal yer 2013. To see how these figures were determined, go here.
Poor are paying the price:
Military spending and
our natioal priorities

“From Forrestal’s day to the present, semi-warriors have viewed democratic politics as problematic. Debate means delay. To engage in give-and-take or compromise is to forfeit clarity and suggests a lack of conviction. The effective management of national security requires specialized knowledge, a capacity for clear-eyed analysis and above all an unflinching willingness to make decisions, whatever the cost.

With the advent of the semi-war, therefore, national security policy became the preserve of experts, few in number, almost always unelected, habitually operating in secret, persuading themselves that to exclude the public from such matters was to serve the public interest. After all, the people had no demonstrable ‘need to know.’ In a time of perpetual crisis, the anointed role of the citizen was to be pliant, deferential and afraid.” — Andrew Bacevich, reviewing a biography of James Forrestal, the first Secretary of Defense, in The Nation.

Andrew Bacevich reminds us that a permanent war economy has been part of the political and economic landscape of the United States at least since the end of World War II.

The War Resisters League pie chart of total government spending for fiscal year 2013 indicates that 47 percent of all government spending deals with current and past military costs. Despite lower government estimates that mask true military spending, by adding the Social Security Trust Fund to total spending and regarding past military spending — particularly veteran’s benefits — as non-military, it is clear that roughly 50 cents of every dollar goes to war, war preparation, covert operations, and military contractors.

In addition, “war support” contractors such as KBR have made billions of dollars in the twenty-first century from military spending. Top producers of military hardware Lockheed Martin, Northrop Grumman, and Boeing earned 11, 8, and 5 billion dollars in contracts in 2010 alone. Ostensibly non-military corporations such as BP, FedEx, Dell, Kraft, and Pepsi received hundreds of millions of dollars in defense contracts in 2010.

Virtually every big corporation is to some degree on the Department of Defense payroll.

Because of the economic crisis which began in 2007, debate about military spending has increased. In 2010 Congressmen Barney Frank and Ron Paul initiated a study addressing needed cuts. The report prepared for them in 2010, “Debt, Deficits, and Defense,” called for across the board reductions in spending-procurement, research and development, personnel, operations and maintenance, and infrastructure — of $960 billion over the next decade. The report noted that over the last decade 65 percent of federal discretionary spending went to the military.

President Obama last January proposed more modest spending cuts of $480 billion over the next decade (reductions in projected increases, not existing funding). He coupled the announcement about future spending with a firm statement that the world must realize that the United States remains committed to maintaining its military superiority.

The President indicated that spending reductions in the future will be tied to greater use of “special operations,” drones, and shifting existent forces from Europe to Asia.

The magnitude of military spending represents what Bacevich referred to as the permanent war economy articulated and defended by the “semi-warriors” dominating U.S. foreign policy in each administration since World War II.

These semi-warriors gained influence after the Truman Administration accepted recommendations in National Security Document Number 68 (1950), which recommended that defense spending should always have priority over all other government spending. NSC 5412, approved by President Eisenhower, gave legitimacy to covert operations around the world allowing any president to “plausibly deny” any connections with such operations.

Subsequently virtually each president proclaimed a doctrine — Eisenhower for the Middle East, Carter for the Persian Gulf, Reagan to rollback “the evil empire,” Clinton for “humanitarian interventions” and Bush for “preemptory attacks” — justifying more and more military spending.

The Obama administration, through speeches and actions, has constructed what might be called “the Obama Doctrine.”

First, as the last remaining superpower and the beacon of hope for the world, the United States once again reserves the right and responsibility to intervene militarily to enhance human rights around the world.

Second, U.S. humanitarian military interventions will be carried out from time to time with our friends.

Third, new technologies such as drones will allow these interventions to occur without “boots on the ground.” They will be cheaper in financial and human cost (mostly for American troops).

Finally, assassinations and covert killings have made it clear that the Obama Doctrine overrides recognized judicial proceedings and the sanctity of human life.

Since the establishment of the permanent war economy in the 1940s millions of proclaimed “enemies” have been killed and seriously injured, mostly in the Global South. Permanent physical and psychological damage has been done to U.S soldiers, predominantly poor and minorities as they too are victims of war.

In addition, military spending has distorted national priorities and invested U.S. financial resources in expenditures that do not create as many jobs as investments in construction, education, or healthcare. And the permanent war economy has created a culture that celebrates violence, objectifies killing, dehumanizes enemies, and exalts super-patriotism through television, music, video games, and educational institutions.

These issues need to be more vigorously related to those raised by the grassroots campaigns that have sprung up to defend worker’s and women’s rights, oppose growing income and wealth inequality, and defend working people’s homes from foreclosures.

A long time ago — in reference to the massive U.S. war in Southeast Asia and desperate needs of workers at home — Dr. Martin Luther King described the fundamental connections that peace activists and all progressives must pursue: “I speak of the poor of America who are paying the double price of smashed hopes at home, and death and corruption in Vietnam.”