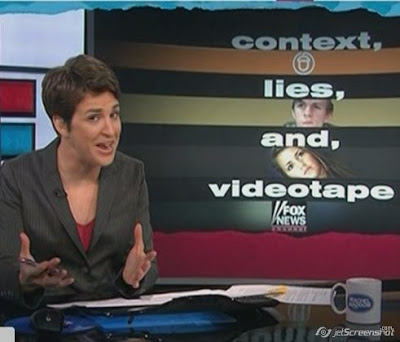 Screenshot of Rachel Maddow reporting on the phony ACORN media sting during her MSNBC show. Image from Democurmudgeon.
What sells is legitimate:
Political news is a commodity

Andrew Breitbart, the despicable electronic journalist of the Right, died on March 2 at the age of 43. Breitbart gained fame for producing short “documentaries” which distorted the image and activities of ACORN, a national organization of community activists. The slander of this grassroots organization led ultimately to its defunding by Congress.

Breitbart prepared and disseminated distorted footage of a speech by Georgia Rural Development Director for the Department of Agriculture Shirley Sherrod leading to her dismissal by the Obama Administration. He constructed a clumsily doctored documentary from a Labor Studies class at the University of Missouri to make it look like the instructors, one of whom was a trade union staffer, were advocating working class revolution.

Breitbart produced vicious lies about people and organizations. The harm he did to the real lives of poor and powerless people in our society in these and other instances is incalculable.

And not only did Breitbart produce venomous news accounts, he became a role model for other so-called journalists who have produced like-minded distorted reportage on venues such as Fox News.

In addition, it is important to recognize that the distorted journalism that pervades Fox News can be found in the work of almost every other major media purveyor, electronic and print, in the United States. And Breitbart was a producer of this distorted journalism and an inspiration for the expansion of it throughout the profession.

So why did Lawrence O’Donnell, who generally is a principled journalist and voice of those victimized by powerful economic and political elites, memorialize Breitbart in such touching ways?

And O’Donnell was not alone. Arianna Huffington and many others took the view that Breitbart, although he presented distorted information that impinged on progressive movements and policies, was passionate about his craft. Several media pundits suggested that Breitbart’s slanderous advocacy journalism, even if misplaced, was a contribution to a new journalism.

Why is it that journalists laud those who produce and disseminate news that destroys organizations and people who do good works? Why are journalists — who produce news that exacerbates anti-worker, racist, and sexist attitudes and values, or more generally produces pain and suffering — celebrated by their peers?

Perhaps part of the answer can be found in an analysis of news in modern society. We know that products that people produce and consume have “use value,” that is they provide some concrete and practical purpose which explains why we value them. Food is produced and consumed because we need food to survive. Beyond food, we consume many products because they provide us with comfort and pleasure.

In a system of commodity production the sales effort becomes more important than the basic value the goods hold for their producers. As capitalism unfolded over the last 200 years, the production of goods and services became more concentrated in fewer and fewer corporations and financial institutions.

Huge conglomerates organized the production and distribution of goods and increasingly engaged in the process of generating demands for the wants people have in a modern society. In short, ours is a society of mass production and mass consumption. And consumers are vital to its survival and growth.

What does this analysis of the rise of our modern economy mean for journalism? It suggests that at some time in the past, images of our world and knowledge about it were produced and consumed by families and communities for their immediate needs. Over time, large media corporations were created to produce news and knowledge for dissemination among larger and larger populations. News became a commodity.

Media corporations increasingly saw the need to produce news, a commodity, which would be broadly consumed by the people. In other words news, in a world in which 10 media monopolies dominate, required the selling of their product. As the media monopolies competed for customers for their commodities, appeals increased to the base desires, values, and beliefs of a population that already were shaped by racism, sexism, and animosity toward workers and the poor.

Here is where skilled journalist/viral ideologues enter the picture. They applied their skills to the production of news that would entice and increase the appetite for more of the news that privileged scandal, racism, and sexism.

But what about the more rigorous, informed, and “professional” journalists who waxed eloquently about Breitbart’s professionalism despite some of his odious practices? Well, sad to say, virtually all media workers are engaged in the business of producing commodities for sale in the media market. So for them, the Breitbarts of the world are to be admired for their craft, if not their message and impacts on people’s lives.

In the end, the intellectual and moral bankruptcy of the media, the 10 media conglomerates that produce one-half of all we read, listen to, and view in news and culture, is a direct result of the fact that our economic system requires the commodification of everything, including news and culture. Andrew Breitbart was an inevitable product of this system.