Harry Targ : ‘Right to Work (for Less)’ in Indiana 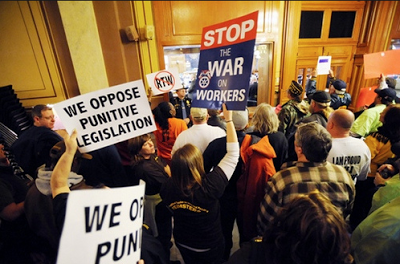 Workers in Indiana opposing HB 1104. Image from PR Watch.
‘Right to Work (for Less)’ in Indiana:
The historic battle against workers

WEST LAFAYETTE, Indiana — Fifty working people assembled at a town hall meeting in West Lafayette, Indiana, on Saturday, January 14, to share information about the latest phase of Indiana’s battle over a new “Right-to-Work-for-Less” bill. The bill will be voted upon some time in the coming week.

One of the minority Democrats in the State House, Sheila Klinker, described the Republicans’ fast-track effort to get their Right-to-Work bill through the legislature and signed by Governor Mitch Daniels well before the National Football League Super Bowl game on February 5. The NFL players union has strongly condemned the bill.

Labor activists had attended the Governor’s State-of-the-State address three days earlier and booed him loudly as he made claims about how Right-to-Work would bring jobs to Indiana (even though he has already praised himself for alleged increases in new investors and jobs in the state during the first seven years of his reign without being a Right-to-Work state).

The Klinker update included reference to the upcoming meeting of the Indiana House of Representatives at which time that body will vote for and probably endorse the bill. Republicans have a 60-to-40 vote majority in that body (and an even bigger majority in the State Senate). Despite the odds, she and her Democratic colleagues support an amendment to the bill which would bring the issue to voters next fall in a referendum.

Although chances of blocking the national reactionary big money juggernaut and the state Chamber of Commerce from getting their way are slim, those for the referendum argue that, because the issue is not well-understood, many Hoosiers remain undecided about it. Since the bill would have such great consequences for workers, union and non-union alike, time to get educated and discuss it is desirable. Also, from the standpoint of most Democrats, a referendum would defuse the escalating political conflict around the state.

Most Indiana Republicans and the big money outside interests represented by such groups as the National Right to Work Committee and the America Legislative Exchange Council (ALEC), want to move as quickly as possible. For them Indiana is a bellwether state in the former industrial heartland where unions have been historically strong, wages and benefits were good, and workers had a greater voice in the work place and the voting booth.

Generally, worker rights of all kinds have been superior in the Midwest compared with the 22 states of the South and Southwest where Right to Work is the law. After the 2010 election these national organizations increased efforts to apply their own “domino theory” to destroy worker rights.

With the victories of reactionary candidates in Wisconsin, Ohio, Michigan, and Indiana reestablishing Right to Work in one state would lead, like a series of falling dominoes, to victories in the rest. (They have already suffered setbacks in this plan in Wisconsin and Ohio.) Indiana, the most conservative of these would be the best place to start. Reestablish Right to Work in Indiana (for a short time in the 60s, Indiana was a RTW state), and the other states would follow.

The Klinker update was followed by two impressive presentations by Tippecanoe County Building and Construction Trade Council President Eric Clawson and Treasurer James Ogden. Clawson gave an impassioned description of what unions meant to all workers. With both heart and intellect he made it clear that the quality of life and work would be made immeasurably worse if union rights were weakened by the Right-To-Work bill.

Ogden referred to numerous studies as he meticulously challenged each claim made by the bill’s supporters. These studies, often based on comparative data between the 22 Right-to-Work states and the rest, have overwhelmingly shown that the 22 have had less job creation, lower wages, worsened health and safety standards, and lowered public school graduation rates.

Even though factors other than Right-to-Work status are also causally connected to these negative worker outcomes, Ogden and Clawson made it clear that the basic standard of living of most workers is hurt by any weakening of the right of workers to form and participate in unions.

It is important to understand that the struggle today in Indiana is part of a 250 year struggle waged off and on between capital and labor in the United States. From the formation of craft unions during the 1780s to the battle for the eight-hour day in the 1880s, to the use of police power, public and private, to destroy railroad and steel workers unions in the 1890s, to the massive general strikes, sit-ins, and other occupy movements of the 1930s, to the PATCO and Pittston strikes of the 1980s, workers have sought to defend their rights and their very survival.

Capitalists have set out to make labor cheaper, more pliable, and vulnerable to shifts in profit-making from investments in factories to stocks, bonds and derivatives.

This latest phase of the struggle has its roots in the passage of the National Labor Relations (or Wagner) Act in 1935. This Act, based on efforts by Congress and President Roosevelt to mollify workers, who were striking all over the country, established the machinery for workers to form unions and procedures for collective bargaining.

From the time of the Unemployment Councils in big cities in 1931, to general strikes in 1934, to factory sit-ins, to the establishment of 40 unions of industrial workers, four million workers strong, in the Congress of Industrial Organizations (CIO) in 1936, labor became a force to be reckoned with in national politics.

The peak of labor strength was reflected in the 1946 strike wave, the largest in U.S. labor history. Four million workers walked off the job in electronics, steel, auto, meat packing, mining, and the railroads. Workers wanted wartime caps on wages lifted, continuation of wartime price controls, greater union recognition at the workplace, health and pension systems, and the creation of a political system in which the political power of labor would be as strong as capital.

However, in the 1946 elections, Republicans gained control of both houses of Congress. A first order of business (much as in the 2012 Indiana legislature) was to destroy the power of organized labor. They passed the odious Taft-Hartley Act which was designed to defend the rights of capital in opposition to the National Labor Relations Act which was seen as special interest labor legislation.

Taft-Hartley banned the closed shop, wildcat strikes, strikes in solidarity with other workers, secondary boycotts, and picketing, and gave the federal government the right to order striking workers to abandon strikes and return to work for 80 days. The act also established rules regarding reporting of finances and constricted the rights of unions to support political campaigns.

Taft-Hartley also required union leaders to sign affidavits proclaiming that they were not members of the Communist Party. Refusal to sign such statements could allow workers to challenge the authority of their unions to continue to represent them. Anti-Communist unions, it was hoped, would replace unions in which leaders failed to sign the affidavits.

Since labor radicals played an instrumental role in organizing the CIO, Taft-Hartley saw undercutting labor militancy as central to winning the battle for capital against labor in post-war America.

To further limit the power of unions to represent the interests of all workers, Taft Hartley included Section 14b. This section allowed states to establish so-called Right-to-Work provisions. These provisions would allow workers to not join the unions that existed in their work sites. Unions were required to represent all workers in unionized work places, even those workers who refused to join their union.

This meant that workers might take a “free ride” by getting important services, including negotiation of contracts and defense in grievances against bosses, without paying for them. The long-term impact, it was hoped, was to reduce the size and resources of organized labor.

In 1947, when Taft-Hartley was passed, powerful economic actors such as the National Association of Manufacturers, the Chamber of Commerce, and huge auto, electronics, and meat packing corporations wanted to achieve several inter-connected goals.

They wanted to destroy the power of organized labor which had grown from the streets and the workplaces to the Democratic Party.

They wanted to launch an anti-Communist crusade to convince a skeptical American public that the United States needed to launch a Cold War against the Soviet Union, and alleged “communist” surrogates at home.

And, Southern politicians, particularly, wanted to defeat “Operation Dixie,” a CIO campaign to organize integrated trade unions in the South.

And, for sure, these economic interests wanted to disabuse American workers, unionized or not, of the idea that they had the right to participate in the political process equal to the wealthy and powerful.

So listening to Hoosier union brothers and sisters speak out now at rallies, before television cameras, at town hall meetings, and in their communities and family gatherings, one feels pride and inspiration from the campaign to defeat Right to Work in Indiana.

And any kind of historical reflection has to lead to the conclusion that today’s struggle is part of the same struggles that go back years and years. These struggles, dare to say, are class struggles. But today the occupy movement has made it clear that this historic battle is one between the 99 percent, for all its variation and the one percent. “Right-To-Work for Less” may pass in Indiana in 2012, but with odds like 99 percent versus one percent, it is clear which side will achieve lasting victory in the years ahead.