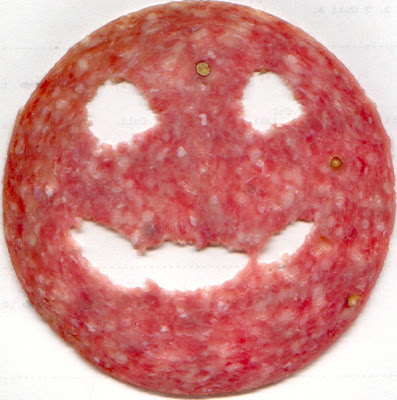 Send a salami to the troops.
Memorial Day:
‘Salamis, not bombs’

Since I live in North Central Indiana I use every opportunity I can to import bagels from Chicago. In the past I have publicly defined socialism as including “bagels for all” (particularly garlic or onion ones). Also I have written about the political economy of the bagel , arguing on good authority that during periods of intense class struggle workers have used day old bagels as weapons against the ruling class.

On a recent visit to a Chicago area bagel bakery, I came across a big sign in front that puzzled me. The sign said:

My first reaction was to laugh. This sign sounded pretty funny. But on reflection I began to ask myself what it meant. I began to think of different responses to the question and, after I sent out a picture of the sign, some of my friends offered their views on the subject as well.

Another, perhaps more neutral, interpretation is about selling salamis, using the patriotism in the old neighborhood to make a few extra bucks. Since the salamis they sell are really good, it could entice troops and Afghan peoples to want more salamis. Before you know it, they could be hooked on them. Who knows: bagels could be next. But this view, I think, is unfairly harsh in its evaluation of the motivations of the delicatessen; too economistic.

Finally, it can be argued, and frankly this was my first thought, that the delicatessen saw the U.S. war in Afghanistan as a mistake that had to be ended as soon as possible. The salami, from this perspective, was a metaphor for a “dud,” a smelly, greasy, and heavy food that can lead to ulcers or heartburn. The 10-year war in Afghanistan therefore was a colossal heartburn in the body politic. (One of my friends wrote that Bush and Obama already had sent Afghanistan the salami.)

This intellectual puzzle, I realized, reflects the various ways in which the sign could be interpreted. Perhaps the delicatessen owners wanted to create a mental construct that could be appreciated by every side of the issue.

That is classic American politics. I bet the Democrats and Republicans who are debating resolutions on the war in Afghanistan in Congress right now would love to come up with a metaphor like this. Maybe Congress should pass an appropriations bill, HR 111: The U.S./Afghanistan Military Nourishment and Rehabilitation Act, or the Send Salamis to Afghanistan Act.

This Memorial Day, as we reflect on the pain and suffering that our wars have caused, perhaps we would all agree that sending salamis overseas is preferable to sending drones and bombs.