Harry Targ :
Should we make more war? Where? How?

Obama’s foreign policy reflects the contradictory approaches of U.S. leadership since the country’s emergence as a superpower. 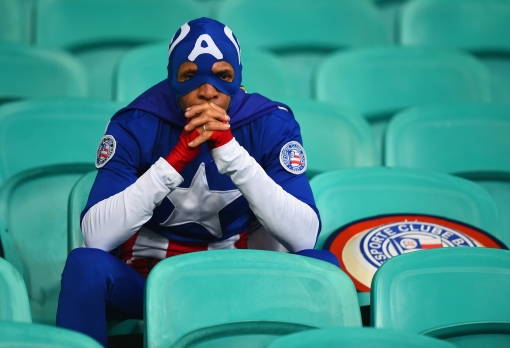 How to play it: A fan dressed as Captain America at the 2014 World Cup. Image from New Statesman / Getty.

Both unity and contradiction are reflected in the history of United States foreign policy from the industrial revolution to the present. The unity of policy in time and space is reflected in the drive to maximize the opportunities for U.S. capital to expand; to acquire more and more wealth, and to seize land, extract resources, and accumulate profits derived from cheaper and cheaper labor.

An example of a significant historical moment reflecting this unity can be seen in the 1890s as the United States seized former Spanish colonies in the Caribbean and the Philippine Islands. Over the next 30 years the U.S. military invaded and occupied Caribbean, Central American, and Latin American countries at least 30 times.

After World War II the United States penetrated Western European economies using economic assistance as a tool, launched a military alliance (the North Atlantic Treaty Organization or NATO), created the largest most expensive military in the world, participated in wars costing millions of lives, and was instrumental in establishing an international financial and trading regime that maximized the opportunities for capitalist countries in the global economy.

From time to time, the drive for U.S. global hegemony was challenged by opposing forces.

From time to time, the drive for U.S. global hegemony was challenged by opposing forces (revolutions, international communist alliances, anti-colonial movements, resistance and revolutionary movements opposing external control, and competition initiated by other states competing for power and profit).

Given the historical United States drive for hegemony, which has its roots in the post-Civil War period in an increasingly resistant global society, U. S. policymakers have debated the relative necessity of adopting different tactics to maintain or enhance the U.S. global role. Since World War II, the globalists as I call them, or the neoconservatives as they are commonly identified, have urged presidents and key foreign and military policy elites to exercise maximum military, political, and economic power to advance U.S. interests.

From President Truman’s call for a struggle against international communism, to the recommendation in National Security Council Document 68 that military buildup be the nation’s number one priority, to John Kennedy’s idealistic call for the U.S. to lead in world transformation, the call for global hegemony was presented to the citizenry. More recently, Ronald Reagan’s doctrine promising the liberation of the world from communism to George Walker Bush’s proclamation that nations are either with us or with the enemy, a global policy of conquest was implemented.

Some foreign policy decision makers recommend more modest articulation of goals and the use of a broad array of tactics.

Alternatively, some foreign policy decision makers and pundits from time to time recommend more modest articulation of goals and the use of a broad array of tactics to achieve hegemonic goals that do not rely primarily on military superiority. President Eisenhower in eight years overthrew governments in Iran and Guatemala, began planning the seeds of destruction in Vietnam, proclaimed a special U.S role in the Middle East, but at the same time called for deescalation of the arms race with the Soviet Union, participated in dialogue with its leader, and resisted pressures from both liberal Democrats and conservative Republicans to spend more on the military.

Jimmy Carter came into office with an articulated human rights agenda and for a time acted critically against military dictatorships in Latin America, advocated democratization in then apartheid-South Africa, and began modest relations with Cuba.

By the time Obama was campaigning for the presidency in 2008, competing positions on United States foreign policy had begun to be broadly debated. These debates, in the past as well as the present, have never been about whether the United States should be “the indispensable nation,” but rather about whether in achieving its goals, the nation should prioritize the use of military tools or should use diplomacy and economics (what some pundits have called “soft power”).

Many Obama supporters saw a leader who would resist the use of the military to
achieve national goals.

While many Obama supporters opposed the traditional U.S. pursuit of an imperial agenda generally embraced by political elites in both parties, they saw in the Obama candidacy a leader who would resist the use of the military to achieve national goals. The pragmatists in the Obama administration would advocate the use of diplomacy more and force less and consequently the frequency and escalation of war and violence would decline.

Obama’s record has been mixed at best as the candidate of the pragmatists as opposed to the globalists. He escalated U.S. military involvement in Afghanistan, intervened in an escalating civil war in Libya, supplied various alleged “moderate” groups fighting regimes it opposed such as in Syria, and expanded the brutal drone attacks on civilians in several countries. In addition he has supported the same covert operators who have spent years undermining populist regimes in Latin America and the U.S. looked the other way when reactionary forces overthrew a democratically-elected government in Honduras.

On the other hand, Obama argued for negotiations with Middle East/Gulf enemy number one, Iran. He has partnered with Vladimir Putin, leader of Russia, to make some kind of agreement with Iran on nuclear weapons developments a possibility. And Obama has begun the process of normalizing relations with Cuba.

Now President Obama is confronted by two crises: Islamic fundamentalist attacks against various regimes in the Gulf and Middle East and the other, the civil war in Ukraine. In both cases Obama is, on the one hand, opting for a globalist response and, on the other hand, is arguing for the more pragmatic approach. Prior presidents shifted from one kind of policy implementation to another as external circumstances and domestic politics required. Beginning in 2015, President Obama has been advocating for both foreign policy positions at the same time in each issue area.

While Obama promises no boots on the ground he declares that the Islamic State in
Syria (ISIS) will be destroyed.

While Obama promises no boots on the ground he declares that the Islamic State in Syria (ISIS) will be destroyed. Over 2,000 bombing raids on targets in Iraq and Syria have been carried out since last summer by American and allied bombers. There is no hint at negotiations here. The declared purpose is to physically destroy the enemy.

Phyllis Bennis has powerfully argued that neither policymakers nor pundits have tried to understand why ISIS and its supporters engage in violence and terrorist acts. But, Obama has asked Congress to vote formal authority for him to continue the war on ISIS but only for three more years. We will continue the slaughter but only for so long. The President had hoped that this proposal would satisfy both the neoconservatives and the pragmatists among foreign policy activists.

As to Ukraine, Obama, like European allies, wishes to avoid a widening war in Central Europe that could lead to a new Cold War or Hot War between the West and Russia. So the President is willing to support negotiations between Europe, Ukraine, Eastern Ukraine, and Russia, but he also urges Congress to allocate military resources to further arm the Kiev government.

When analysts, such as scholar Stephen Cohen, suggest that the Russian support of eastern Ukrainian separatists has something to do with their concerns about an eastward expansion of NATO, the claim is ignored or not reported at all. Media pundits see no reason why Russians and pro-Russian Ukrainians would fear NATO or the descendants of Ukrainian fascists from the World War II era who have influence over the Kiev government.

So Obama administration foreign policy today reflects a unity of contradictory United States foreign policies that have been key features of the U.S. role in the world ever since its emergence as a superpower. All the contradictions borne of a drive to dominate and the resistance it causes are coming to a head today.

This is a critical juncture for the peace movement. The calls for economic conversion from militarism to domestic spending, a new foreign policy that respects human rights and peoples’ sovereignty, and a militant demand to end war and violence as a tool of United States foreign policy need to be heard loud and clear.

1 Response to Harry Targ :
Should we make more war? Where? How?