Harry Targ : Sleeping Through the News 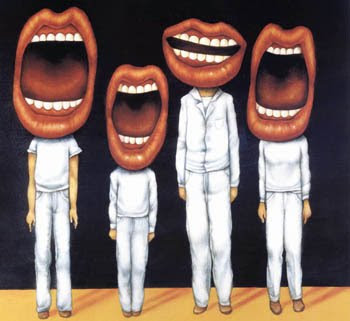 Talking heads. Image from Today’s Word on Journalism.
Sleeping through the news:
‘I suppose there is nothing we can do…’

While I sleep through some of the news shows hosted by Ed Shultz, Rachel Maddow, and Lawrence O’Donnell on MSNBC every night I am conscious of at least part of each. In addition, I watch an hour’s worth of whoever is hosting the daytime news program on this “liberal” channel as I limp along on the treadmill at the gymnasium.

The framing and information about the world provided by MSNBC is often useful. Some stories I would not have access to any other way, such as the growing Michigan program to replace local officials with state-appointed financial officers who will have authority to supersede the decisions of those elected.

Sometimes hosts present materials on grassroots struggles that more “mainstream” media would not dare cover. We who engage in such grassroots politics know that the world is changing. But most of the media have ignored uprisings, until the Occupy Movement temporarily made such inattention impossible.

Contrary to providing useful information, the cable liberals of MSNBC have done a disastrous job on other stories. They ridicule U.S.-defined enemy leaders without providing any context for their disdain. This is the case for Kim Jong Il, Muammar Gaddafi, the leadership of Iran and others from the Global South.

More damaging still, the liberal cable stations provide little coverage of world affairs aside from an occasional report from Afghanistan or an anti-drone story, which is good.

Even more negative, in my view, are the hours upon hours of coverage of the Republican presidential nominating process. We have heard more about the daily ups and downs in the fortunes of the various Republican candidates for president in Iowa than any combination of stories on jobs, the environment, or the European debt crisis.

Since I occasionally doze off, I may have missed coverage of the Durban conference on the environment, the recent formation of a bloc of Latin American and Caribbean countries, the Community of Latin America and Caribbean States (CELAC) to assert regional self-determination, the post-war Libyan political situation, or the decision by the Obama administration to send U.S. marines to protect Australia from Chinese aggression.

MSNBC communicates some good information, exaggerates the importance of certain stories, and ignores material that represents the bulk of the experiences of humankind. This may be OK. We have the internet, left blogs, list-serves, and web pages (which raise different issues of left censorship) to supplement our knowledge about the world. 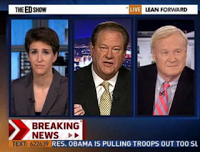 Political junkies, particularly activists, find ways to build cognitive data banks and analytical abilities. Good alternative radio, television, and internet outlets exist. Amy Goodman’s qualitatively different news program, “Democracy Now,” can be seen and heard on radio and television stations and online around the country. Even though it has its own agenda (don’t we all) the English language Aljazeera, which is available mostly on the internet, at least portrays a world that does not begin and end with the United States and Western Europe.

So while liberal media informs consumers, it also distorts or ignores news. Watching MSNBC on the treadmill yesterday raised to my awareness a level of media malevolence I had not thought about before. A glib panel of inside-the-beltway commentators provided useful information about the disparity of wealth and income between our political leaders, such as Congresspersons, and average Americans.

They portrayed, with some data, a political system that is at best an aristocracy and at worst a system driven by an economic ruling class that has bought and paid for political elites who serve its interests. One can only recall Marx’s profound assertion that the state represents the “executive committee of the ruling class.”

These five pundits skillfully presented the data, albeit with a posture suggesting that the data was humorous. After discussing whether all people who are part of the one percent lack empathy for the poor (after all FDR and JFK were concerned about the poor), one of the professional hacks concluded by saying that he supposed that “there is nothing we can do.” Alas, inequality, poverty, powerlessness, and the multitude of problems humankind faces will always be with us.

Many thoughts raced through my mind (I almost fell off the treadmill). This conversation did not include any reference to the Occupy Movement. No mention was made of the recent Supreme Court decision that legitimized massive private spending in elections. It failed to include a discussion of campaign finance reform.

And it ignored the fleeting possibility of grassroots activists such as the Progressive Democrats of America, the Green Party, the Peace and Freedom Party in California, the recall movement in Wisconsin, the successful campaign to overcome anti-worker laws in Ohio, and on and on.

Of course, not all of these or many other campaigns can fully and/or successfully address the problem. But there are millions of people in the United States and around the world who are giving their time, resources — and sometimes their lives — to change rule by the few.

And finally, such discussions willfully ignore the proposition that the economic and political systems that dominate our lives are the problem. At least some would say that these systems must be overturned and new institutions created. And, if history is any guide, such things have happened before.

But where would these pompous, overpaid, and underworked journalists be if the society did change? They in fact have a stake in promoting the message that nothing can be done.

This speaks, then, to an alternative media, education, and role for intellectuals, which can present information about the world and realistically analyze the programs and possibilities for action that work on behalf of the interests of the many, not the few.