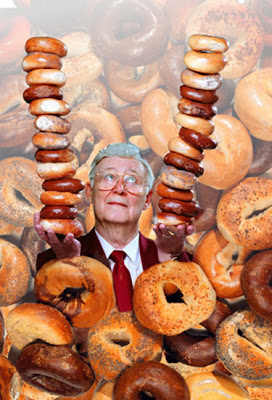 Political theory and the tower of bagel. Image from Neurotopia.
Bagels and the theory of capitalist development

I think Marx had a pretty good analysis of how capitalism works but even I recognize that his theory did not adequately come to grips with the political economy of the bagel.

A long time ago Karl Marx theorized that in capitalist societies the class of people that own and control the means of production — the machines, the factories, the workers — constituted an economic ruling class. The only thing that workers owned was their ability to do work.

Over time, Marx said, the number of capitalists would get smaller and smaller and what they owned and controlled would get bigger and bigger. Marx’s predictions pretty much have come to pass with a few hundred corporations and banks controlling about one-third of all that is produced on the face of the globe.

The political economy of the bagel

Now I am one of those people who think Marx had a pretty good analysis of how capitalism works but even I recognize that his theory did not adequately come to grips with the political economy of the bagel. The bagel originally was a round roll with a hole in the middle that began to get hard as soon as it came out of the oven. Water bagels, the authentic bagels, were plain, hard, and flat when cut so that cream cheese could be spread evenly or in chunks over their surface. Also, bagels could just as easily be used to throw at targets during a popular uprising as they could be used to stifle hunger.

Bagels used to be produced in small Jewish bakeries that dotted neighborhoods in Eastern and Midwestern cities. Along with the generic food/weapon, the plain bagel, more adventurous Jewish bakers began to experiment with the production of garlic bagels, onion bagels, and poppy seed bagels. Bagel bakers were highly skilled craft workers, probably descendants of the powerful medieval bagel guilds of Central Europe.

In sum, the introduction of the bagel in Jewish communities provided for the nutritional needs of the community, a means of defense and deterrence against aggression from outside the community, and over time a source of cultural identity. As Jews migrated throughout the United States, they maintained an identification — even if not articulated — with the bagel.

The rise of monopoly capitalism and the production of the bagel

Although followers of Marx have carefully analyzed the accumulation of capital on a national and global scale and have linked the concentration of economic power with control of the modern state, hardly ever did they notice the transformation that was going on right under their noses concerning the political economy of the bagel.

The small bagel bakeries of old were closing their doors. Many people rejecting their heritage began to eat croissants and muffins for breakfast instead of bagels. And as the traditional consumers of bagels left the working class and joined the bourgeoisie, they no longer wished to stockpile old bagels as weapons in the class struggle.

These events led some to predict the demise of the bagel as we had known it. But then the economic ruling class, suffering from declining rates of profit, discovered the bagel and began to reconstitute the global capitalist system. First, some food processing companies started selling packages of frozen bagels — small, tasteless, harmless little bagels. Then, new bagel bakeries/sandwich shops began to open in urban centers. These spread like wildfire around the country. Pretty soon the word “bagel” was on everyone’s lips.

Then newer bakery shops, part of global conglomerates, would come to town, underprice their product, and force out their competitors — both bakeries and coffee and sandwich restaurants. The bagels they produced and sold were big, puffy, and mushy inside, and had bizarre flavors such as chocolate, cinnamon, or basil. Everybody was ordering a bagel with a “schmear” (heretofore a technical term). Perhaps most importantly these bagels would be as powerful a weapon as a pillow.

The process of production of bagels had changed as well. No longer were the bagel bakers craftsmen and women who carefully crafted their products with pride. Now bagels were partially assembled in huge bagel factories and shipped, uncooked, to the hundreds of thousands of stores in the chain to be baked and sold to the untutored and the young.

Today the bagel industry is a multi-billion dollar a year industry, dominated by a handful of bagel monopolies. Even the traditional doughnut conglomerates are selling their own bagels in thousands of stores.

When Marx wrote Das Kapital in the 1860s, he could not have predicted the rise of bagel capitalism. He would not have guessed that the bagel trust would increasingly control global capitalism transforming the bagel from a working class nutrient to a yuppie affectation and from a weapon of potential mass destruction to a coffee table adornment. In fact, if he had eaten a chocolate bagel, he might have thrown up.

1 Response to Harry Targ : The Theory of Bagel Capitalism