Harry Targ : The ‘Unfinished Revolution’ of the Emancipation Proclamation 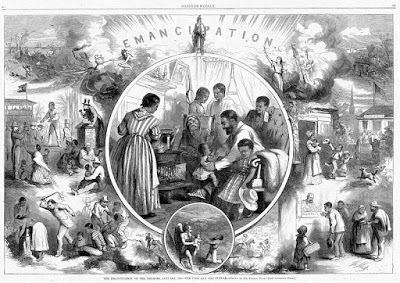 The candidacy of President Obama in 2012 offers a continuation of the struggle for political rights against the most sustained racist assaults by neoliberals, conservatives, and tea party activists since the days of segregation.

“That on the first day of January, in the year of our Lord one thousand eight hundred and sixty-three, all persons held as slaves within any State or designated part of a State, the people whereof shall then be in rebellion against the United States, shall be then, thenceforward, and forever free… — President Abraham Lincoln, “The Emancipation Proclamation,” January 1, 1863.

The Purdue University Black Cultural Center on September 21, 2012, organized a panel honoring the 150th anniversary of President Abraham Lincoln’s preliminary Emancipation Proclamation, the final version of which was issued by the President on January 1, 1863.

The proclamation declared slaves in the states rebelling against the United States to be free. It did not apply to those border states which had not seceded from the Union. In those states 750,000 slaves were yet to be liberated.

Celebration of political anniversaries provides an important opportunity to better understand the past, how the past connects to the present, and what needs to be done to connect the present to the future. As a participant on this panel I was stimulated to reflect on the place and significance of the Proclamation and the centrality of slavery and racism to American history.

The discovery of gold and silver in America, the extirpation, enslavement and entombment in mines of the aboriginal population, the beginning of the conquest and looting of the East Indies, the turning of Africa into a warren for the commercial hunting of black skins, signalized the rosy dawn of the era of capitalist production. These idyllic proceedings are the chief moments of primitive accumulation (Capital, Volume 1).

Second, the Emancipation Proclamation began a political revolution, abolishing slavery in Confederate states, but it did not embrace full citizenship rights for all African Americans nor did it support economic emancipation.

The historical literature documents that while Lincoln’s views on slavery moved in a progressive direction, the President remained more committed to preserving the Union than abolishing slavery. Until the Proclamation, he harbored the view that African-Americans should emigrate to Africa, the Caribbean, or Central America to establish new lives.

As historian Eric Foner wrote: “Which was the real Lincoln — the racist or the opponent of slavery? The unavoidable answer is: both.” In short, President Lincoln, an iconic figure in American history thought and acted in contradictory ways.

Third, Lincoln’s growing opposition to slavery during his political career and his presidency was influenced to a substantial degree by the abolitionist movement. As an influential participant in that movement Frederick Douglass had a particular impact on Lincoln’s thinking.

Foner points out that on a whole variety of issues “Lincoln came to occupy positions the abolitionists first staked out.” He continues: “The destruction of slavery during the war offers an example, as relevant today as in Lincoln’s time, of how the combination of an engaged social movement and an enlightened leader can produce progressive social change.”

Fourth, the promise of the Emancipation Proclamation was never fully achieved. It constituted an “unfinished revolution,” the creation of political rights for former slaves but not economic justice. The former slaves remained dependent on the plantation system of agriculture; landless sharecroppers beholden to former slave owners.

Fifth, post-civil war reconstruction began to institutionalize the political liberation of African Americans. For a time Blacks and whites began to create new political institutions that represented the common interests of the economically dispossessed. But the collaboration of Northern industrial interests and Southern plantation owners led to the destruction of Reconstruction era change and a return to the neo-slave system of Jim Crow segregation.

Even the “unfinished revolution” was temporarily crushed.

Sixth, over the next 100 years African Americans, workers, women, and other marginalized groups continued the struggle to reconstruct the political freedoms implied in the Emancipation Proclamation and temporarily institutionalized in Reconstruction America. The struggle for democracy culminated in the Civil Rights Acts of 1964 and 1965, and the rising of Latinos, women, and gays and lesbians.

Finally, the contradictions of victories achieved and the escalation of racist reactions since the mid-1960s continues. And, most vitally, the unfinished revolution continues. The question of the intersection of race and class remains as gaps between rich and poor in wealth, income, and political power grow.

In this historic context, the candidacy of President Obama in 2012 offers a continuation of the struggle for political rights against the most sustained racist assaults by neoliberals, conservatives, and tea party activists that have existed since the days of segregation.

At the same time Obama’s reelection alone, while vital to the progressive trajectory of American history since 1863, will not complete the revolution. The need for social movements to address the “class question,”or economic justice, along with protecting the political gains that have been achieved, will remain critical to our future.

One hundred and fifty years after the Emancipation Proclamation the struggle for democracy, political empowerment, and the end to class exploitation, remains for this generation to advance.