Harry Targ : ‘The Untold History of the United States’ 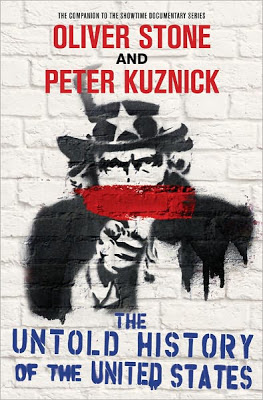 It’s not untold…
The ‘Untold History of the United States‘

Stone and Kuznick’s 10-part series is a brilliant and entertaining narrative of the United States’ role in the world since the onset of World War II.

Oliver Stone has made an enormous contribution to discussions of the United States role in the world. His films have described the horrific consequences of United States foreign policy for the people of El Salvador and Vietnam, the American political system, and the U.S. soldiers victimized by wars not of their making. While his films, such as JFK, raise controversial claims, they have stimulated important public conversations.

This television season, Showtime, a cable channel, is showing a 10-part series written and produced by Stone and his academic collaborator, historian Peter Kuznick. The series, The Untold History of the United States, is a brilliant and entertaining narrative of the United States’ role in the world since the onset of World War II.

It warrants broad distribution within educational institutions and among communities of political activists. Because of our ahistorical culture people do not have a sense of the critical decisions that were made 50 or 100 years ago which have structured the political and economic life of the country ever since.

Critical moments in United States history have channeled the prospects for progressive social change today and tomorrow. From the arrival of colonial armies to the “new world,” to the introduction of slavery to the Western Hemisphere, to revolution against British imperialism, to the civil war and the defeat of post-war reconstruction, the American experience has been shaped by class and race in the context of burgeoning industrial and financial capitalism. The Spanish/Cuban/American war stimulated the rise of the United States as the preeminent empire from the Philippines to the Western Hemisphere.

Most of us have received a sanitized history of these earlier historical moments. In addition, our understanding of the rise of socialist movements in the 1930s in response to the Great Depression and the global fascist threat, the realities of World War II, and the emerging U.S. hegemony after the war which led to the “Cold War” between global capitalism and socialism have been limited as well.

Oliver Stone’s 10-part “untold history,” in collaboration with Professor Kuznick, fills in some of the void. Several themes about the onset of the Cold War are particularly important:

First, while the series overemphasizes the role of elites in shaping U.S. history Stone and Kuznick do point out that these elites always perceived the threat workers, radicals, and other rank-and-file activists meant to ruling class dominance. Much of foreign policy was designed to crush revolutionary ferment overseas and at home.

Second, in the first two episodes emphasis is placed on the lost opportunity for the left that resulted from the successful efforts of political elites, particularly in the Democratic Party, to force Henry Wallace, President Roosevelt’s third term vice president, and 1948 candidate for president on the Progressive Party ticket, from power. Wallace as Secretary of Agriculture during the New Deal was an economic populist, anti-racist, and pro-union sympathizer and after World War II an advocate for United States/Soviet Union collaboration.

Stone and Kuznick probably exaggerate Wallace as an alternative to the imperial, counter-revolutionary, and racist path the United States took after the war but correctly make it clear that CEOs from massive corporations and banks and political elites from both political parties were committed to crushing those left forces that flowered in the United States in the 1930s and grew in popularity all across the globe.

The Soviet Union was one manifestation of global resistance to capitalism that paralleled the spread of massive anti-colonial ferment in the Global South.

Third, the filmmakers provide overwhelming evidence to show that the defeat of fascism in Europe was largely the result of the massive Soviet military machine. Americans suffered about 290,000 wartime dead and the Soviet Union 27 million. And Stone, who narrated the documentary, suggests that while Joseph Stalin was a cruel dictator, his policies must be understood in the context of the rise of fascism in Europe and the refusal of western powers, particularly Great Britain, France, and the United State, to stand up against it.

He correctly portrays Stalin as a nationalist who was prepared to sacrifice all principles, in this case Communist ones, to prepare for and to defend the Soviet Union. This overriding commitment, Stone implies, carried over into Soviet diplomatic interaction with the rest of Europe and the United States after the war.

Fourth, in great detail Stone and Kuznick make it clear that the United States did not have to use two atomic bombs over Hiroshima and Nagasaki to force the Japanese to surrender in the summer of 1945. The Japanese leadership knew they were soon to be defeated. Many had advocated for surrender by the time of the Potsdam Conference of July, 1945 and American policymakers were aware of it.

Also, and this was critical, the bomb was designed to send a message to the Soviet Union as well as Japan. The United States in the years ahead would be the dominant military power in the world.

Stone and Kuznick point out that the decisions to drop two atomic bombs on Japan signaled the dawn of a new age. Now weapons of mass destruction would be used to pursue global hegemony. There no longer would be any limits on the possibility of death and destruction derived from world affairs.

In other words, Stone and Kuznick are making the case that at least from the onset of the Cold War to today, U.S. foreign policy has been driven by economic and political interests to dominate the world and has responded violently to a multiplicity of forms of resistance. The locales of struggle changed as would the forms of resistance. But the structure that was put in place after World War II remains the albatross around the necks of those who seek change today and tomorrow.

The series is an indispensable lesson for peace and justice activists today. However, it should be added that the “untold” story has been told before. As a result of the threats of nuclear war in the 1950s, United States policies toward Cuba and Vietnam in the 1960s, and patterns of U.S. covert interventions and violence against peoples on every continent, progressive scholars began to use their methods to uncover this history 50 years ago.

Historians and activists were inspired by the classic text by William Appleman Williams, The Tragedy of American Diplomacy. Williams’ work, then called “historical revisionism,” inspired other groundbreaking studies of the onset and perpetuation of the Cold War by Joyce and Gabriel Kolko, Gar Alperovitz, Diane Clemens, Lloyd Gardner, Walter LaFeber, Thomas Patterson, and many more. The works on McCarthyism, repression of labor militancy, and mystification in popular culture could fill libraries.

While it is true that documentary films cannot provide footnotes, it is important for viewers to realize that progressive scholars during the depths of the Cold War used their skills to research, teach, and for some, engage in political activism based on their findings.

And finally, if the “untold” story has in fact been told many times, a question that becomes important is why we as a people, even the political activists among us, are not apprised of it. And this leads to analyses of how knowledge has been appropriated in the service of United States foreign and domestic policy.

1 Response to Harry Targ : ‘The Untold History of the United States’