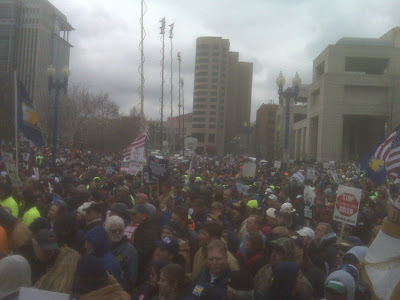 On a cold, rainy day thousands rallied against anti-worker legislation March 10 in front of the Indiana Statehouse. Image from Fox59.
In bitter cold rain:
Thousands rally at Indianapolis State House

INDIANAPOLIS –On Thursday morning, March 10, three buses left the parking lot of a large supermarket in Lafayette, Indiana bound for the huge workers rights rally at the Indianapolis State House.

The buses were sponsored by the United Steelworkers Local 115A and the NAACP. About 100 workers, teachers, and peace and justice activists were on the buses. About two miles away another three buses left for Indianapolis with 100 activists from the Building Trades Council of Tippecanoe County and the Northwest Central Labor Council (AFL-CIO).

The buses were warm, cozy, and the spirit of solidarity pervaded the atmosphere. Travelers were determined to demonstrate their outrage at the rightwing onslaught on workers and education being planned by Indiana Republicans. Arriving about one hour later, riders disembarked from the warm and fuzzy atmosphere of the trip to a bitterly cold, cloudy, and windy rally in downtown Indianapolis.

The rally consisted of speeches, chants, prayers, and exhortations. Thousands of Hoosier workers withstood the cold to express their anger and their clear realization that the quality of their lives was in jeopardy.

Local 115A passed out some literature to articulate the reasons for enduring the cold and shouting for economic justice. They said that:

Another USW Local 115 document made the motivation for action crystal clear:

We stand at the statehouse as one people, one labor movement, one united group of citizens. We are proud to be union members and union supporters because together we have built Indiana! Whether we are construction workers, teachers or students –whether we clean buildings, deliver health care or manufacture useful products — we stand together!

There were different assessments of the State House rally in Indianapolis. The conservative Indianapolis Star, on the one hand estimated that only 8,000 workers rallied in Indianapolis, but on the other hand pointed out how cold, windy, and rainy the weather was, suggesting that attendees were truly committed.

One trade unionist, recalling the rally of 20,000 Building Trades workers in 1995 indicated that he could not tell if this rally was bigger or smaller than that one. Another worker said that we needed at least 100,000 at the rally to make a difference.

Several speakers expressed their appreciation for those that attended the rally. AFL-CIO leaders from Kentucky and Wisconsin pointed out that the Indiana struggle was part of a larger movement involving workers from Wisconsin, Ohio, Illinois, New Jersey, and everywhere that the basic standard of living of workers was being challenged.

Perhaps the most poignant statement came from an Iraq war vet who reminded the crowd that $3 trillion had been spent on two costly, foolish wars in the 21st century that helped create today’s economic crisis.

The outcome of the ferment, anger, and rebelliousness all around the world remains unclear. But one fine folk singer, after leading the crowd in a rendition of “This Land is Your Land,” wished the movement well. He recalled Woody Guthrie’s injunction: “Take it easy, but take it.” Perhaps that is where we are at today.