Harry Targ : Time for Progressives to ‘Get on the Bus’ 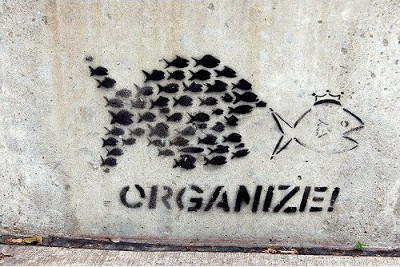 Organize: The handwriting’s on the wall.
Social justice and the fall elections:
Mobilizing the progressive movement

That was the conclusion 16 activists from Illinois, Indiana, and Kentucky came to after a day-long meeting assessing the needs of progressive forces between now and the fall elections, and after.

The occasion was the semi-annual meeting of the Midwest Region of the Committees of Correspondence for Democracy and Socialism (CCDS). The small but spirited gathering of activists addressed the significance of the 2010 fall elections, the economic crisis, and how to incorporate Jack O’Dell’s recently proposed Democracy Charter into the project of building a progressive majority.

Ted Pearson, Chicago peace and justice activist, opened with a discussion of elections 2010 called “Saving the Progressive Majority.” He quoted from a recent article in The Nation by Jean Hardisty and Deepak Bharvava, “Eighteen months into the Obama era, the progressive movement is experiencing malaise, based on disappointment about what has been accomplished so far and confusion about the path forward.”

Pearson noted that while the Obama administration has achieved modest gains in public policy — health care reform, some financial regulation, expansion of poverty programs, student loan reform, and the selection of two moderate Supreme Court justices — people are angered and frustrated by the continuing economic crisis, particularly high unemployment and under employment, two wars, threats to civil liberties, and lack of progress on immigration reform and climate change legislation.

Polling data about where people stand on issues and candidates, Pearson said, suggests much anger and confusion. Progressives must use the next six weeks to reverse the dangerous tilt toward reaction.

Pearson quoted from a recent speech by Van Jones, environmental activist and green jobs advocate, targeted by the right wing for dismissal from the Obama administration, who argued that after eight years of despair activists in 2008 felt a sudden surge of hope. Now there is the danger of returning to despair. Nothing, Jones suggested, can be more destructive to the prospects for a people’s agenda than to withdraw.

It must be made clear that the 2008 election only got progressives “to the starting line”; that the projects initiated have not been completed; and that the struggle in the electoral arena and elsewhere must continue.

Drawing from these comments and history, Pearson concluded that achieving change requires the building of a mass movement. It was the mass movement that led to Obama’s victory and it will take a mass movement to force him and all the institutions of national, state, and local government to move in a progressive direction.

For right now, Pearson argued, progressive forces need to support the massive rally, “One Nation Working Together,” to be held on October 2. This rally will be historic, bringing together the National Association for the Advancement of Colored People (NAACP), the American Federation of Labor and Congress of Industrial Organizations (AFL-CIO), and the National Council of La Raza (NCLR), and hundreds of peace, justice, and environmental groups. 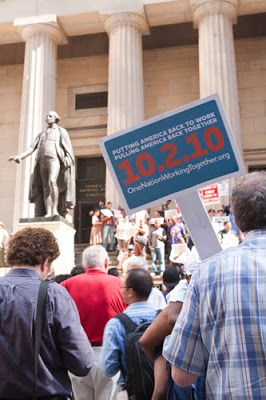 October 2: A massive gathering for economic and social justice.
The October 2 movement will not only bring hundreds of thousands to Washington, D.C. to take back the public image from the right wing, but it will galvanize local progressive groups to speak and work together, whether they are able to go to Washington, D. C. or not. Most important, October 2 promises to bring a broad coalition to “the starting line” so that they can work together in the months and years ahead to achieve economic and social justice and peace.

Most attendees endorsed Pearson’s analysis and Jones’ call to fight despair. They endorsed a campaign to mobilize those who worked so hard to get to the starting line in 2008 to organize at the grassroots for October 2. The campaign for “One Nation Working Together” must build on analyses of the interconnections between class, race, and gender. White privilege, so much a part of the Tea Party agenda, has to be directly challenged.

Ira Grupper, labor activist and chair of the CCDS Labor Committee, opened the second panel with a discussion of the crisis of jobs described in the new CCDS booklet, “It’s Time to Fight for Full Employment.”

Rich with data and commentary, the document points to the long term structural character of unemployment in the United States. Recessions, periods of limited or no economic growth, have been followed by longer and longer periods of high unemployment. Over the last decade recoveries from economic stagnation have occurred without reductions in unemployment; so-called “jobless recoveries.”

Grupper pointed out that in recent years corporate announcements of job layoffs have usually been followed by increases in stock market prices. Since the dawn of the new century, profit making by huge corporations and banks has been coupled with declining economic security for American working people.

Grupper referred to the booklet’s description of deindustrialization, financialization, and increasing marginalization of workers by race as well as class. Others added that the particular impact of the recession on women needs to be highlighted.

In addition, participants identified a web of interconnections between cuts in education, lack of training for youth, the rise in marginalization, the shift to the so-called “informal sector,” often criminal activity, and incarceration with no resources for programs of rehabilitation. As Grupper pointed out, the youngest cohort of workers, ages 16 to the mid-20, experience the highest rates of unemployment, some never having experienced a job.

Grupper pointed out that the CCDS booklet summarizes a number of proposals for change, including the United States Steel Workers proposals for a green jobs agenda, support for workers cooperatives, and demands for a new industrial policy that emphasizes public sector employment including infrastructure construction.

The final panel, introduced by Janet Tucker, National Organizer, CCDS, and Mildred Williamson, member of the National Executive Committee, CCDS, described the 2009 Democracy Charter crafted by 87-year-old civil rights activist Jack O’Dell. O’Dell, once an aide to Dr. Martin Luther King and editor of the distinguished journal, Freedomways, has called on 21st century activists to work for a program called the Democracy Charter. The idea of the Democracy Charter was inspired by the Freedom Charter adopted by the African National Congress (ANC) in the 1950s as it organized to defeat racial apartheid in that country.

In addition, O’Dell was inspired by the so-called “Five Principles” of peace and justice embraced by the newly formed Non-Aligned movement of nations in Bandung, Indonesia, also in the 1950s. Both documents proclaimed that freedom and justice both within countries and among them are indivisible. By adopting a Democracy Charter now, O’Dell has argued, progressives in the United States and around the world can articulate a vision for a better world; one that connects class, race and gender, peace, environmental justice, and the uplift of humankind.

Tucker and Williamson pointed out that the Charter, as currently written consists of 13 main points:

During the day, attendees grappled with the difficulty of communicating progressive ideas in a politically charged and hostile environment. Several commentators agreed that the Democracy Charter, like the Freedom Charter of the 1950s, may have the appeal to move beyond premature rejection.

By seriously reflecting on the election just 50 days away and carefully assessing the structural crisis of the U.S. economy, the attendees at this regional meeting recognized the tasks that progressives must complete. And by reflecting on the Democracy Charter they saw a way to clarify the meaning of their work to organize with others to push beyond “the starting line.”

Metaphorically, all agreed to “get on the bus.

6 Responses to Harry Targ : Time for Progressives to ‘Get on the Bus’