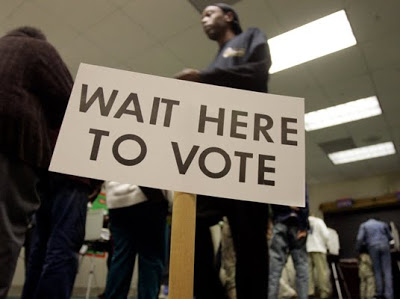 Then wait some more? Image from BET.
The 2010 elections:
What are we going to do on Wednesday?

Americans always check the win/lost columns. From mid-April to some time in June I check the progress of my beloved Chicago Cubs on the sports pages. After that my interest in baseball tapers off because hopes usually are dashed by June.

Thinking about sports might help us think about politics and social change as well. Winning and losing is defined by what happened yesterday and about where your side is in the standings.

There is much less interest in watching the game for what it is. Little attention is paid to where the team has come from and the prospects of building a better team in the future. In other words, history — the connections between yesterday, today, and tomorrow — is less important than the most recent box score and standing in the race.

I remember waking up the first Wednesday in November 1980 with a heavy heart, a headache, a sense of despair as deep as I could remember in my life. Students told me that in all of their classes professors were decrying the prospects for America because Ronald Reagan had been elected president.

I raise the sports metaphor and my 1980 feeling of a world crashing down as I think about Tuesday’s Congressional elections. I don’t think the progressive candidate slate will be big losers as the Cubs are by June every year. Also I do not believe that we will see the Republican “tsunami” that some have been predicting that would resemble the 1980 election.

But I realize I need to reconsider the intellectual underpinnings of the political highs and lows that I felt in 2008 and will feel in 2010. Why? Because I and we need to better understand the longer-term trajectory of progressive politics in America.

There are three possible outcomes we can expect from Tuesday’s Congressional elections. These are listed on the basis of their relative probability of occurrence based on available evidence, flawed though that is.

The second possible outcome is the one that has been trumpeted by most of the media for months, a massive victory for Republicans. This would lead to Republican control of the House of Representatives and the Senate and would constitute the most sustained challenge to the Obama administration.

Curiously, this expectation has been driving the news accounts from Fox to NPR. Their reports have been based on constant polling data using the most dubious of methods — including robo calls to landlines and day-time calling. The tsunami outcome, if it occurs, could reasonably be explained by the enormous reporting bias that has encouraged two contradictory behavioral reactions: “back the winner” voting or “it’s hopeless” non-voting.

A third possible outcome which is not inconceivable would result from modestly better turnouts from those who constituted the Obama coalition of 2008: people of color, the young, workers, and those seriously disappointed with the administration and Congressional Democrats but who see the so-called Tea Party alternative as qualitatively worse.

What do each of these outcomes mean for progressive politics after the election? As to broad vision and our program of actions over the next several months, it is important to recognize that not much will change. We need to continue to build a progressive majority around achieving fundamental goals.

We need to mobilize forces, connecting “street heat” with direct pressure on legislators and the administration, to pass a jobs bill. Right now, the bill that makes the most sense is the one introduced by Congressman John Conyers, HR 5204: “The 21st Century Full Employment and Training Act,” which will set goals to reduce unemployment over 10 years from the current levels to four percent, institutionalizing the principle of the government as Employer of Last Resort, and which will be paid for by taxes on financial transactions.

We need to broaden and deepen our work around climate crisis legislation, effective regulation of energy corporations, and building a green economy.

In addition, we need to work against the war in Afghanistan, for the elimination of U.S. global militarism, in opposition to funding of Israel’s aggression, and to cut United States military spending by half or more, converting war spending to education, infrastructure, and research and development for peaceful activities.

These priorities do not change irrespective of which of the three options come to pass.

At the tactical level, progressives will continue their debates about how to achieve these goals and how to begin talking about “21st century socialism.” We will need to assess strengths and weaknesses of those who might support us in the Congress. We will need to debate how to relate to the Obama Administration.

We also will need to assess the long-term significance of massive movement collaborations for progressive change. Here I am thinking about the World Social Forum and the One Nation rally, held October 2, organized by the NAACP, La Raza, and the AFL-CIO.

On reflection, progressives need to realize that the 2010 Congressional elections do not constitute the end, a defeat or a victory, but the continuation of an historical process of change.