Harry Targ : Why Wisconsin is Important 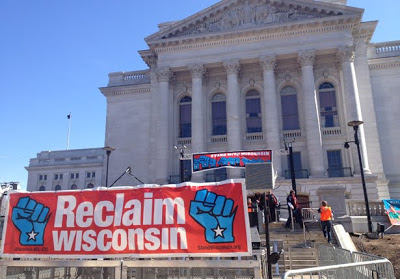 The Capital in Madison, Wisconsin, on Saturday, March 10, 2012. Photo by Barbara Rodriguez / AP. Image from The Nation.
Wisconsin is important

The defeat of Walker and his Republican legislative colleagues will give energy and enthusiasm to grassroots movements… and will prove that people-power can trump money-power.

Progressives look to cities and states that have been models of legislation and activism for inspiration. Of course, East Coasters look to New York City and West Coasters get their ideas from the Bay Area. If you grow up in “the Heartland,” that is the Midwest, you take from the historic example of certain states, such as Wisconsin.

A long time ago a noted political scientist, John Fenton, studied the politics of six Midwestern states, identifying central features dividing them. The so-called “job-oriented states,” Indiana, Illinois, and Ohio, were driven by money, power, and politics narrowly defined. The “issue-oriented states,” Wisconsin, Michigan, and Minnesota, had a politics that was significantly shaped by political ideologies and the promotion of various progressive values and principles.

Taking Wisconsin as a prime example, the state has historically distinguished itself by recognizing the right of public sector workers to form unions, the election of a Socialist mayor in Milwaukee, and the creation of a viable Progressive Party with presidential candidate Robert La Follette, Sr., winning 17 percent of the vote in 1924 (the state of Wisconsin was carried by candidate La Follette).

Madison, Wisconsin, was one of the homes of the intellectual and activist ferment that became “the 60s.” The “revisionist “school of scholarship concerning the United States as an imperial power was popularized in the history department of the University of Wisconsin. Among those activists that did some reading, William Appleman Williams’ ground-breaking, The Tragedy of American Diplomacy, helped to reshape thinking about United States foreign policy.

One of the premier journals of the early New Left, Studies on the Left, was initiated on the Madison campus. In addition, many remember Wisconsin politicians who crossed the line from Democrat to progressive over the years, from William Proxmire to Russ Feingold to Tammy Baldwin.

So watching the rise to power of Scott Walker and a bevy of tea party Republicans in 2010, such that the entire state government apparatus came under their control, was a puzzle to casual Heartland observers. Of course, progressives forget that Wisconsin was also the home of the very popular, at least for a time, Senator Joseph McCarthy who set the standard for public condemnation of those who disagreed with him and his right-wing colleagues and followers. Therefore, like most places, the political landscape in Wisconsin has been contradictory.

The Wisconsin contradiction has been no more glaring than during the time frame from early 2011 until today. The Walker administration, with no effort at dialogue and compromise, signed legislation denying most public sector workers the right to organize. Walker later worked to repeal existing legislation requiring equal pay for women. He, and his Republican legislature, embraced completely the legislative package of ALEC, the American Legislative Exchange Council, to reverse the populism that shaped Wisconsin’s political tradition. 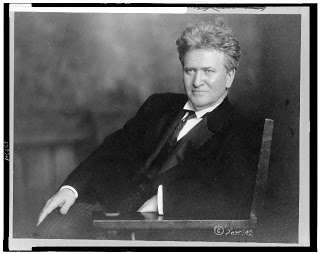 Progressive Party presidential candidate Robert La Follette, Sr. Image from the Clarence Darrow Digital Collection / University of Minnesota Law Library.
These moves sparked an enormous outrage and political mobilization of opponents that fundamentally brought the spirit of Arab Spring to the United States. It can fairly be said that there was an inspirational link from Tunisia; Tahrir Square in Egypt; to Madison, Wisconsin, Ohio and Indiana; to the Dream Coalition; and most recently to the Occupy Movement. The Wisconsin opposition to the near-fascist agenda of Scott Walker and his minions has essentially “brought the war home,” as a 60s slogan defined it.

But now the passion for fighting back against reaction and moving the country back on the path to progress is being threatened. Just a week from now Wisconsin voters will decide whether the recalled Governor Walker will be reelected or be replaced by Democratic Party challenger Tom Barrett. The polls look like Walker could win reelection.

It is true that the right-wing billionaires — the Koch brothers and others — have outspent the Barrett forces 25 to 1. In a capitalist system money talks but money does not always determine the outcome. People-power which led to the recall of Walker in the first place overcame money in April. And people-power must be the main resource if Barrett is to defeat Walker and the right.

However, the national Democratic Party, from the Democratic National Committee, to President Obama, to Vice President Biden, to the Progressive Caucus in the House, should be involved. And it remains a puzzle why Republican governors and billionaires are campaigning in Wisconsin while prominent Democrats are not visible with the exception of former Wisconsin Senator Russ Feingold.

Progressive forces around the country need to understand that the future of national, as well as state, politics will be affected by the outcome of the Walker/Barrett race. A Barrett victory could begin to reverse the process of assault on public sector unionism (and not just in Wisconsin). A Barrett victory might give energy to those in Wisconsin and all over the country who oppose attacks on public education (K-12, and university levels). A Barrett win would be an important step in the long-term “fight-the right” campaign which will continue even beyond the 2012 presidential election.

Perhaps most important, the defeat of Walker and his Republican legislative colleagues will give energy and enthusiasm to grassroots movements which began in Wisconsin and spread like wildfire around the country. It will prove that people-power can trump money-power. And, it will give proof once again that so-called “inside/outside” strategies remain useful tools for organizing. That is, as progressives build social movements, they use the electoral processes at their disposal to bring alternative visions to the people.

And, it needs to be said that a defeat for reform will be a defeat for progressive forces, not only in Wisconsin but nationally.

2 Responses to Harry Targ : Why Wisconsin is Important