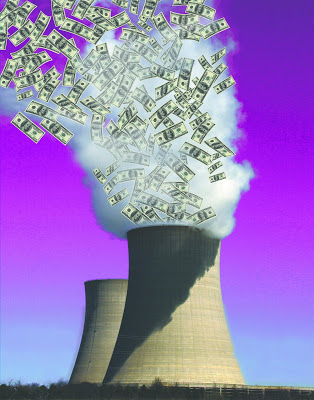 Journalist and environmental activist Harvey Wasserman will be Thorne Dreyer’s guest on Rag Radio, Friday, Dec. 10, 2010, 2-3 p.m. (CST), on KOOP 91.7 FM in Austin. To stream Rag Radio live on the internet, go here. To listen to this interview after it is broadcast — and to other shows on the Rag Radio archives — go here.

The White House and nuclear power industry are on the brink of grabbing $7 billion in new taxpayer-funded loan guarantees for new reactors. But they can be stopped.

Taxpayer and environmental groups are asking citizens to call their Senators urging deletion of the guarantees.

The guarantees have been stuck into the Continuing Resolution just passed by the House to fund the government. It now goes to the Senate, where calls should be directed to delete this budget-busting radioactive boondoggle.

Nuke lobbyists have spent more than $640 million in the past decade to fund a “nuclear renaissance” from the federal trough. Earlier this year the Obama Administration and the industry’s congressional minions were set to add as much as $36 billion to a Department of Energy loan guarantee program to build new reactors. Citizen opposition has been instrumental in slashing that number.

Because they are uneconomical and cannot compete with natural gas and renewables, private funding for new reactor projects has been virtually nonexistent. The General Accounting Office and Congressional Budget Office have predicted at least a 50% financial failure rate for such loans.

Some $18.5 billion in funds for reactor construction loan guarantees were set aside by the Bush Administration. Obama gave out $8.33 billion of it earlier this year to the Southern Company’s two-reactor project at Vogtle, Georgia, where ratepayers are being forced to fund the plant as it’s being built. More than $10 billion of the original federal money remains undistributed.

At an industry summit in Washington December 7-8, Energy Secretary Stephen Chu anointed atomic energy as a “clean” energy source that could be included in future official mandates and guidelines for energy production.

When running for president, Obama courted green activists by warning that “before an expansion of nuclear power is considered, key issues must be addressed including: security of nuclear fuel and waste, waste storage and proliferation.”

Radioactive leaks and shaky operations endemic to the 104 licensed U.S. reactors have deepened grassroots opposition to new ones. Financial commentaries in the Wall Street Journal and elsewhere have made it clear that the proposed new projects can’t compete with gas and renewables. Massive delays and cost overruns at reactor projects in Finland and France have helped kill private sector interest in the technology as a whole.

But Sen. Lamar Alexander (R-TN) is calling for 100 new reactors, requiring a capital liability of a trillion dollars or more, which he wants the taxpayer to guarantee. Other industry representatives in Congress and the Administration have supported similar plans.

All this comes despite the industry’s inability to attract comprehensive private investment capital, or to provide umbrella liability insurance for major disaster by terror and error that could ultimately cost thousands of lives and trillions of dollars.

The industry still has no answer for its waste problem. It has yet to finalize a standard design acceptable to regulators. In terms of job creation in the energy sector, reactor investments are among the very worst.

Thus this new nuclear push is vehemently opposed by the core of the environmental movement, and by budget hawks angry about supremely risky new liabilities being piled on to a gargantuan national debt.

Amidst a national furor over leaks and taxes, the battle over these loan guarantees may ultimately have the most lasting impact. Thus immediate calls to the Senate may have a huge long-term impact on the fate of the Earth.