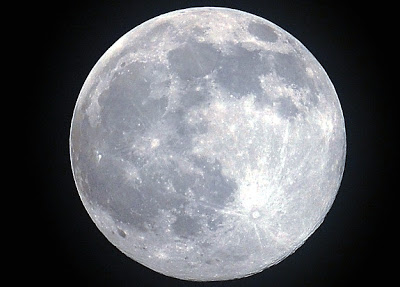 The second full moon in a single month is commonly known as a ‘blue moon,’ and that’s what we saw on New Year’s Eve.Photo by Vatsyayana / Getty.
Our blue-mooned, baby-boomed 64th birthday baptism…

When we believed ourselves immortal, as all young people do, there was nothing we could not do. Now we count the victories, and assess what we might win in the time left us.

The moment has come. The first Baby Boomer cohort has turned 64.

I celebrated the moment seven hours and 24 minutes early by jumping into a tiny cove in the Florida Bay.

The chilly but exhilarating water demanded an answer: Will we green the Earth? Will we win social justice? Will we get to Solartopia?

Unlike so many of you reading this, I am not a Boomer. The demographic officially extends from January 1, 1946 to December 31, 1964. It is a giant elephant of a population explosion swallowed by a decades-long python of a population decline.

The soldiers coming back from World War II multiplied like rabbits. The Boom was worldwide. In the U.S. it birthed some 76 million children.

My dad was a submarine welder in Boston’s shipyards, so I came early: at 4:36 p.m., December 31, 1945. Thus the leap into the Bay, which is in desperate need of protection from the ravages of agricultural monsters who are destroying the Everglades on which this fragile but irreplaceable eco-system depends for a clean, steady flow of water.

Those of us who took that astonishing tour through the 1960s have to think of ourselves as “forever young.”

But 64 is a big number. It means many of us have lost one or both of our parents, or are taking care of them as they become increasingly infirm.

It also means WE are meeting such ailments. “Parts wear out,” my mother said.

And we’re “at that age” when we lose friends and lovers, spouses and siblings, and sometimes, worst of all, even children.

“Learning experience” can never fully cover the losses of loved ones. But they do remind us our own days are numbered.

When we believed ourselves immortal, as all young people do, there was nothing we could not do.

Now we count the victories, and assess what we might win in the time left us.

In our lifetimes, undeniable strides have been made in civil rights — for African-Americans and, in tandem, for women, for GLBT and for other national and ethnic minorities, as well as for those with special challenges.

Social justice is another story. Since the end of the New Frontier/Great Society, with the horror of the Vietnam War, income disparities have worsened. Those social programs did work. Now the gap between rich and poor, a downfall of all great nations, is escalating, with no end in sight. We have long had the means to end poverty and hunger, and have chosen simply not to do it.

The root of that choice is war. The Vietnam assault was the biggest blunder of our lifetime. Everything is worse because of it, from homelessness and poverty to the decline of our educational and health systems. That successive Boomer presidents have chosen to repeat the error in Iraq and Afghanistan is beyond tragic.

Likewise the environment. The green movement has many roots. But the fight against nuclear power was the first to put thousands of Americans onto the streets and into the jail cells, and must be ready to do so again. Talk of reviving this failed technology is beyond lunatic.

Above all, in our lifetime, the globalized corporation has metastasized into the most powerful institution in human history. A cancerous beast that has usurped human rights without human responsibilities, the trans-planetary corporation is now beyond the reach of the nation-state. Only a global green movement, tied through the internet and whatever else we can contrive, can overcome the sinister power of these interlinked financial machines, whose only goal is profit.

To fight back, we need a vision, a Solartopian greenprint.

We need to attack the corporation at its root, in its legal charter and wherever we can find a foothold.

To kill the cancer, we must eliminate waste and its worst expression, war, the ultimate breeding ground of illegitimate power.

Only with peace can we win a true democracy, based on social justice. All humans have the right to food, shelter, clothing, medicine, educatio, and dignity. In tandem must come the paper ballot, hand counted, with universal automatic voter registration.

Our food needs to be organically raised, with sustainable agricultural practices.

The question of how many humans our planet can sustain will be answered with the empowerment of women. With equal access to education, employment and reproductive rights, the mothers of our species will bring us a sustainable number of children.

As that happens we can eliminate fossil and nuclear fuels, replacing them with the Solartopian technologies that really work, including solar, wind, sustainable biofuels, geothermal, ocean thermal, tidal, wave, current and other forms of renewables not yet conceived. In a maximally efficient world, with revived mass transit, the green transition we must win to survive does become doable.

So this Blue-Mooned New Year’s Eve, with my growing-up-all-too-fast daughter on my back, we jumped into the Barley Basin to commemorate that moment 64 years ago when my saintly mother gave her final push to get me into this world. The demographic deluge would boom in less than eight hours.

With Bonnie Raitt’s “Nick of Time” running through our brains, the equation simplified:

“With justice comes peace… with peace comes freedom… with freedom, all is possible… even Solartopia.”

That should keep us busy for a while, yes?

The next blue mooned New Year’s Eve is scheduled for 2028. See you then… on a green-powered Earth.

[Harvey Wasserman’s Solartopia! Our Green-Powered Earth is at www.harveywasserman.com, along with A Glipmse of the Big Light: Losing Parents, Finding Spirit, and Harvey Wasserman’s History of the United States]