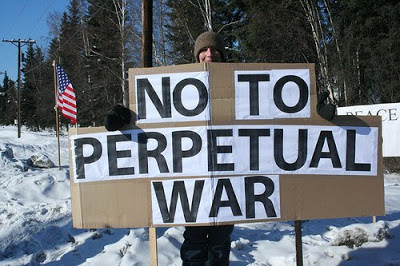 Image from Opinione.
Keeps the wheels of industry turning:
Afghanistan is about perpetual war

It’s about preventing democracy in the United States, not bringing it to Southwest Asia.

And it is the tombstone of the Obama Presidency.

It keeps the public frightened and dependent.

And it keeps “the wheels of industry turning without increasing the real wealth of the world. Goods must be produced, but they must not be distributed.”

Better to destroy them in a ritual slaughter like Afghanistan, and wherever is next.

For a truly prosperous society, educated and secure, cannot be ruled by the few. Poverty, ignorance and fear are the three pillars of authoritarian control. Without war, they all disappear.

Thus Afghanistan. Before it: The Cold War, Korea, Vietnam, Central America. After: Whoever else is handy.

Zinn’s The Bomb , testifies to the obliteration of Hiroshima and Nagasaki, and the utter senselessness of these “announced nuclear tests.” Once an Allied bombardier, Zinn revisited a French town he helped destroy. He found the act, of which he was once proud, had no military meaning whatsoever.

Though he passed away earlier this year, Zinn’s People’s History of the United States continues to shape our understanding of this nation’s true core. In narrating the hidden, bloody past of our compromised democracy, he warns at end that even for the U.S., “There is no flag large enough to cover the shame of killing innocent people.”

David Swanson’s new War is a Lie adds to the litany. A tireless campaigner for peace and justice, Swanson was instrumental in tearing away the ridiculous Bush lie that the war in Iraq was about Weapons of Mass Destruction. War is a Lie adds carefully documented, passionately argued reasons why the era of endless slaughter in Southwest Asia is a tool of social control for the military-industrial elite.

Over the years, Norman Solomon’s superb books, and his film War Made Easy, have also provided a firm, steady opposition to this fatal addiction.

Nowhere has our military madness become more transparent than in the Obama Administration. The “shellacking” the Democrats took this fall stems directly from Obama’s painfully visible failure to bring hope or change to a nation at war since 1941.

For a few infuriating weeks, Obama danced around the decision to escalate in Afghanistan. Rarely has a single human being had a greater chance to change history.

More than 50% of taxpayer money goes to weaponry. We have troops in more than 100 countries. We spend more on our military than all the rest of the world combined. Throughout history — Athens, Rome, Persia — empires have spent themselves to military oblivion. We have now been in Afghanistan longer than the USSR.

With a simple speech, Obama could have begun the Great Reversal. It was a crystal clear moment. The public support was there. It was what he was elected to do.

But like Lyndon Johnson’s catastrophic March 1965 decision to escalate the war in Vietnam, Obama went exactly the wrong way. He became the first man in history to accept the Nobel Peace Prize with a pro-war speech. With Bush’s Secretary of War by his side, he ceded to the military our nation’s most critical decision. He doomed our domestic economy and global ecology by burying us still deeper in the lethal quagmire of perpetual war.

All else is sad detail. When Obama caved on Afghanistan, so did his presidency.

As Orwell, Zinn, Swanson, and Solomon make clear, perpetual war is the carefully engineered route to poverty, ignorance, and dictatorship. Afghanistan is merely the latest installment in this seamless, unseemly tragedy. Its ever-changing justifications are meaningless smokescreens, forever poised to cloud the inevitable transition to the next conflict. The names, places and rhetoric may change, but the impact will not.

Until we find a way to break through to a genuine state of peace — and we must, and soon — we have no future.

[Harvey Wasserman’s History of the United States, introduced by Howard Zinn, is at www.harveywasserman.com. He edits the www.NukeFree.org web site. For a good time, see Pete Seeger, Dar Williams, David Bernz and the Rivertown Kidz sing “Solartopia!” at www.solartopia.org .