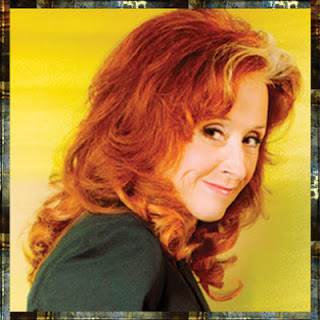 Bonnie has balanced an astonishing musical range with a message and a way of carrying herself that are firmly rooted in her Quaker heritage.

Adversity can debilitate and defeat a lesser soul. But for those with the inner strength to make the climb, new heights can beckon.

Along the way — especially for a musician — it helps to have an other-worldly talent, a gift that combines decades of hard work with those inexplicable powers that come from the slipstream of the spirit.

A combination like that can light up the world, especially at jam-packed concerts that become joyful communions.

Now on the second leg of an epic U.S. tour — to be followed in Asia and Europe — Bonnie Raitt has taken it to a new level. Reading through the show-by-show reviews of her performances is like being witness to an ecstatic coronation.

Bonnie’s well-deserved joyride comes after a long ordeal of personal loss. Her parents, brother, and a close friend all passed in scary succession. She has also set sail with her own Redwing Records label.

None of which have shaken her political convictions or willingness to act on them (by way of disclosure, I’ve worked with Bonnie since 1978 and edit the website for NukeFree.org, whose core she comprises with Jackson Browne, Graham Nash, and benefit producer Tom Campbell).

Bonnie’s Slipstream has the trappings of an album made by someone with a transcendent talent doing exactly what she wants — and making it work. The opening song — with which she opened concerts I saw in Indianapolis and near Dayton — is Randall Bramblett’s searing “Used to Rule the World,” an admonition to egos and empires about the immutable laws of karma:

Dr. Feelgood
Sitting on a park bench
Can I get a witness?

For all these decades, through a score of albums, nine Grammys, a slot at the Rock Hall, appearances with Leno-Letterman-Ellen-Colbert, Bonnie has balanced an astonishing musical range with a message and a way of carrying herself that are firmly rooted in her Quaker heritage. A mainstay of the No Nukes movement for more than 30 years, she is not shy.

Last week, while receiving a lifetime achievement award at the Americana Music Festival in Nashville, she told a standing-room-only crowd that this year’s election had become an “auction. The efforts that are going on in our country to actively discourage people from voting and to put up roadblocks to people getting registered to vote” are among “the saddest threats to our democracy to come along in a long time.”

The Supreme Court’s Citizen’s United decision,” she added, “is one of the worst things that has ever happened to our democratic process…If you look at the millions of dollars that are being wasted trying to buy elections when that money could help so many people, it makes you really sad.”

In many ways Bonnie’s newest album is her most interesting. My own favorite has long been the double-shot Road Tested, which puts her live and on stage.

But Slipstream is quirky, challenging, edgy, brilliant, brimming with confidence, and often just downright gorgeous. The songs work live and on stage, especially when mixed with classics like John Prine’s “Angel From Montgomery,” which she opened a capella, and the tear-inducing “I Can’t Make You Love Me.”

Bonnie’s talent and politics are both family affairs. A supporter of the legendary Quaker-based sea-faring opposition to nuclear testing in the Pacific, John Raitt was one of the great stage performers of his generation, bringing epic depth and power to Oklahoma and Carousel, which he took on tour for decades. Bonnie’s mother Marjorie was an accomplished pianist.

With them came a vital dose of essential good cheer. Bonnie thanked one audience for coming because “we’re not really suited for any other kind of work.” In the Rock Hall’s inductee film, when asked by a young girl why she took up the guitar, Bonnie explains it was “to meet boys.”

The four in her band include Hutch Hutchison on bass, George Marinelli on guitar, and Ricky Fatarr on drums — all with her forever. New piano man Mike Finnegan adds some Irish zip… and the chutzpah to “thank Bonnie for opening for me” when he takes a solo turn.

Having weathered her storms and grown into her unique talent, Bonnie is now being greeted by fans — at the sold-out Dayton show, one of them was my neighbor — turning up in bright red wigs and giant grins. What they get in exchange is a warm, unaffected master of spunk and joy, thankful to be performing, genuinely grateful to be with you. As no one else can, she brings rock, folk, country, blues, Broadway, soulful ballads, that amazing slide guitar, and an evergreen glow of accomplished integrity.

“My dad performed until he was 88,” she said at the end of the Dayton show. Hale, happy, and hearty at 62, Bonnie Raitt’s promise of decades more to come is the best music you’ll hear in many a year.

[Harvey Wasserman edits www.nukefree.org and is author of Solartopia!: Our Green-Powered Earth. He is co-author with Bob Fitrakis of Will the GOP Steal America’s 2012 Election? Read more of Harvey Wasserman’s writing on The Rag Blog.]