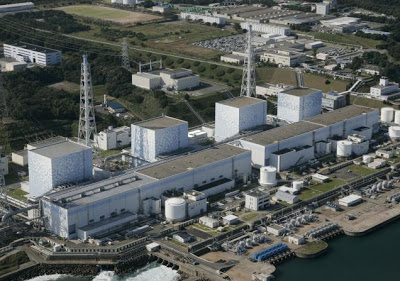 The Fukushima No. 1 power plant of Tokyo Electric Power at Okuma, Fukushima Prefecture, northern Japan, shown in a photograph from October 2008. Japan has issued a state of emergency at the nuclear power plant after its cooling system failed. Photo from AP.
Had it hit off the California coast:
Japan’s quake could have
irradiated the entire United States

Had the massive 8.9 Richter-scale earthquake that has just savaged Japan hit off the California coast, it could have ripped apart at least four coastal reactors and sent a lethal cloud of radiation across the entire United States.

The two huge reactors each at San Onofre and Diablo Canyon are not designed to withstand such powerful shocks. All four are extremely close to major faults.

All four reactors are located relatively low to the coast. They are vulnerable to tsunamis like those now expected to hit as many as 50 countries.

San Onofre sits between San Diego and Los Angeles. A radioactive cloud spewing from one or both reactors there would do incalculable damage to either or both urban areas before carrying over the rest of southern and central California.

Diablo Canyon is at Avila Beach, on the coast just west of San Luis Obispo, between Los Angeles and San Francisco. A radioactive eruption there would pour into central California and, depending on the winds, up to the Bay Area or southeast into Santa Barbara and then to Los Angeles. The cloud would at very least permanently destroy much of the region on which most Americans rely for their winter supply of fresh vegetables.

By the federal Price-Anderson Act of 1957, the owners of the destroyed reactors — including Pacific Gas & Electric and Southern California Edison — would be covered by private insurance only up to $11 billion, a tiny fraction of the trillions of dollars worth of damage that would be done. The rest would become the responsibility of the federal taxpayer and the fallout victims. Virtually all homeowner insurance policies in the United States exempt the insurers from liability from a reactor disaster.

The most definitive recent study of the 1986 Chernobyl disaster puts the death toll at 985,000. The accident irradiated a remote rural area. The nearest city, Kiev, is 80 kilometers away.

But San Luis Obispo is some ten miles directly downwind from Diablo Canyon. The region around San Onofre has become heavily suburbanized.

Heavy radioactive fallout spread from Chernobyl blanketed all of Europe within a matter of days. It covered an area far larger than the United States.

Fallout did hit the jet stream and then the coast of California, thousands of miles away, within 10 days. It then carried all the way across the northern tier of the United States.

Chernobyl Unit Four was of comparable size to the two reactors at Diablo Canyon, and somewhat larger than the two at San Onofre.

But it was very new when it exploded. California’s four coastal reactors have been operating since the 1970s and 1980s. Their accumulated internal radioactive burdens could exceed what was spewed at Chernobyl.

Japanese officials say all affected reactors automatically shut, with no radiation releases. But they are not reliable. In 2007 a smaller earthquake rocked the seven-reactor Kashiwazaki site and forced its lengthy shutdown.

Preliminary reports indicate at least one fire at a Japanese reactor hit by this quake and tsunami.

In 1986 the Perry nuclear plant, east of Cleveland, was rocked by a 5.5 Richter-scale shock, many orders of magnitude weaker than this one. That quake broke pipes and other key equipment within the plant. It took out nearby roads and bridges.

Thankfully, Perry had not yet opened. An official Ohio commission later warned that evacuation during such a quake would be impossible.

Numerous other American reactors sit on or near earthquake faults.

It has yet to reveal its exact plans for dealing with a major reactor disaster. Nor has it identified the cash or human reserves needed to cover the death and destruction imposed by the reactors’ owners.

[Harvey Wasserman edits NukeFree.org. He is Senior Advisor to Greenpeace USA and the Nuclear Information and Resource Service. He co-authored Killing Our Own: the Disaster of America’s Experience with Atomic Radiation.]