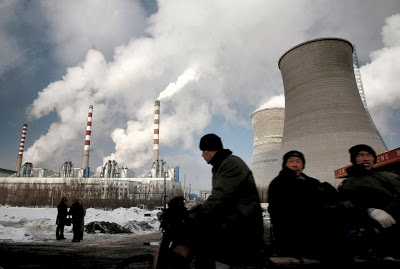 Workers cycle past a nuclear power plant on a tricycle cart in Changchun, in northeast China’s Jilin province, Dec. 17, 2010. Japan and Germany are limiting or phasing out reliance on nuclear power after the Fukushima accident. Photo from AP.
We’re at a turning point:
Let’s join Japan
and junk new nukes

Japan will build no new nuclear reactors. It’s a huge body blow to the global industry, and could mark a major turning point in the future of energy.

Says Prime Minister Naoto Kan: “We need to start from scratch… and do more to promote renewables.”

Wind power alone could — and now probably will — replace 40 nukes in Japan.

The United States must join them. Axing the $36 billion currently stuck in the 2012 federal budget for loan guarantees to build new reactors could do the trick.

Wind potential alone between the Mississippi and the Rockies could produce 300% of the nation’s electricity. That doesn’t include solar, geothermal, ocean thermal, sustainable biofuels, and the many more renewable sources poised to reshape the American energy future once the prospect of new nukes is discarded.

Japan was set to build 14 new nukes before Fukushima. Six of Japan’s total of 55 reactors were shut by the earthquake and tsunami. Three at Kashiwazaki remain shut from the seven that were hit by an earthquake less than five years ago. Kan wants three more closed at Hamaoka, also in an earthquake/tsunami zone.

Japan’s reactor fleet remains the world’s third-largest, behind the U.S. and France. The General Electric and Westinghouse nuclear divisions, builders of nearly all the commercial reactors in the U.S., are at least partly controlled by Japanese companies. Reactor Pressure Vessels and other major components are built there.

Four California reactors also sit in earthquake zones vulnerable to tsunamis. San Onofre, between Los Angeles and San Diego, has 7.5 million people living within a 50-mile radius. Its two operating reactors and one dead reactor sit less than a mile from the high tide line.

Diablo Canyon, near San Luis Obispo, sits near a series of earthquake faults, including one newly discovered less than two miles from the two reactor cores there.

Numerous other U.S. reactors are perilously close to earthquake faults, including two operating at Indian Point, 35 miles north of Manhattan. The Perry reactor, on Lake Erie east of Cleveland, was damaged by an earthquake in January, 1986.

Massive quantities of heat have poured into the global ecosystem from the multiple explosions, partial meltdowns and spent fuel fires at Fukushima, contributing significantly to global warming.

Highly radioactive fallout has been found miles from the site. Millions of gallons of extremely contaminated water have poured into the ocean.

Radioactive fallout has also been detected in rainwater, milk, and on vegetables throughout the United States, threatening the health of millions of Americans, especially small children and embryos in utero.

Now Fukushima Unit Four appears to be on the brink of physical collapse. Fission may be continuing in at least one spent fuel pool, and possibly in one or more cores. Radiation levels are high enough at the site to guarantee certain near-term death to workers, many of whom have come to consider work at Fukushima to be a virtual suicide mission. A definitive end to the disaster could be years away.

Kan’s decision to shut Hamaoka and then to cancel future nukes came as a shock. Widely criticized for weakness in the wake of Fukushima, he has now redefined Japan’s energy future.

Though dependent on imported fossil fuels, major Japanese corporations have substantial investments in wind, solar, and other Solartopian technologies. This will push them to the forefront of Japan’s energy future.

Likewise Germany. In the wake of huge public demonstrations and a major electoral defeat, Prime Minister Angela Merkel has shut seven old reactors and says 10 more will go down by 2020, making Germany nuke-free. For decades Germany has been pushing wind, solar, and other green technologies harder than any other industrial nation, with enormously profitable results.

In the U.S., renewables are also booming, while the reactor industry has been taking hard hits. Just this week a major French-operated component factory proposed for Virginia has been pushed back two years — which means likely cancellation. A $5 billion taxpayer-funded facility in South Carolina to produce plutonium-based Mixed Oxide reactor fuel faces a lack of customers, and growing doubts about the project’s viability or real purpose.

Overall, Fukushima has complicated an already dark financial picture. A Texas project meant for Japanese financing is now all but dead. So is one proposed for Maryland by the French.

While the Obama Administration continues to push for those $36 billion in loan guarantees, it’s unclear what reactor projects are in credible shape to accept them.

Meanwhile ferocious battles to shut old reactors in Vermont, New York, New Jerse, and elsewhere are heating up. With roughly two dozen of similar design to Fukushima Unit One now operating in the U.S., the public demand for more shutdowns continues to escalate.

We need to finish the job and get to a green-powered Earth.

The industry can’t get private financing, can’t get meaningful liability insurance, can’t deal with its wastes, can’t compete in the marketplace, can’t guarantee us we won’t suffer a Fukushima of our own, can’t provide a reliable energy supply into the future.

What lies before us once we kill these loan guarantees is a Solartopian reality powered by the sun, wind, tides, waves, earth’s heat, and more.

Those countries like Germany, Denmark, and now Japan that head definitively toward a nuke-free future are in the process of turning toward survivability and prosperity.

Let’s kill that loan guarantee package, shut the dying nukes like Vermont Yankee and Indian Point, and join them in truly green-powered future.