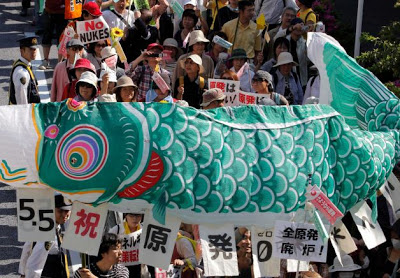 This weekend’s message from Japan and France could not be more clear: at nuclear power’s historic core, the collapse has come.

There are zero commercial reactors operating in Japan today. On March 10, 2011, there were 54 licensed to operate, well over 10% percent of the global fleet. But for the first time in 42 years, a country at the core of global reactor electricity is producing none of its own.

Worldwide, there are fewer than 400 operating reactors for the first time since Chernobyl, a quarter-century ago.

And France has replaced a vehemently pro-nuclear premier with the Socialist Francois Hollande, who will almost certainly build no new reactors. For decades France has been the “poster child” of atomic power. But Hollande is likely to follow the major shift in French national opinion away from nuclear power and toward the kind of green-powered transition now redefining German energy supply.

In the United States, a national grassroots movement to stop federal loan guarantees could end new nuclear construction altogether. New official cost estimates of $9.5 to $12 billion per reactor put the technology off-scale for any meaningful competition with renewables and efficiency.

In India, more than 500 women have joined an ongoing hunger strike against construction of reactors at Koodankulam. And in China, more than 30 reactors hang in the balance of a full assessment of the true toll of the Fukushima disaster.

But it seems to have no end. Three melted cores still smolder. New reports from U.S. Senator Ron Wyden (D-OR), confirm that at least one spent fuel pool suspended 100 feet in the air, bearing tons of hugely toxic rods, could crash to the ground with another strong earthquake — a virtual certainty by most calculations.

Those uncovered fuel rods contain radioactive cesium and other isotopes far beyond what was released at Chernobyl. A fire could render vast stretches of Japan permanently uninhabitable (if they are not already). The death toll could easily claim millions worldwide, including many of us here, where the cloud would come down within a week.

Japan’s total shutdown cuts to the core of the historic industry. The globe’s primary reactor designers, General Electric and Westinghouse, are now primarily Japanese-owned. Pressure vessels, steam generators, and much more of the industry’s vital hardware have long been manufactured in Japan.

But the archipelago’s antinuclear movement also has deep roots. In 1975-6, large, angry crowds I spoke to were already demanding the end of Fukushima and other reactor projects. They warned that all Japanese reactors were vulnerable to earthquakes and tsunamis, and that disasters on par with what happened at Fukushima were essentially inevitable. Now that it’s happened, the public rage in what has been a traditionally conservative, authoritarian society is almost unfathomable.

Along the way, local governments did win the right (not enjoyed in the United States) to keep shut nearby reactors that were closed for repairs and refueling. On Saturday, May 5, a deep-rooted, highly focused grassroots movement shut the archipelago’s last operating nuke. It’s bound and determined to keep them that way.

As summer air conditioning demand skyrockets, Japan’s Prime Minister will try to prove that atomic power is essential. But an efficiency-oriented public has dealt very well with cutbacks in supply since Fukushima. Each potential restart will have its own dynamic.

Japan’s stunning reality is that its gargantuan capital investment in more than 50 commercial reactors is now dead in the water… and being irradiated by its own deadly fallout. That can only drag the global industry closer to oblivion at a moment when the public’s financial and political commitments to renewables and efficiency are deepening daily.

Likewise the demise of Nikolas Sarkozy. His allies at France’s nuclear-commited utility, EDF, have been Europe’s primary pushers of the “Peaceful Atom.” Now his Socialist rival is running the country, backed by a constituency largely supportive of a green conversion to parallel the one in neighboring Germany.

The confrontation may be most immediate at San Onofre, on the Pacific shore between Los Angeles and San Diego. Faulty steam generator tubes have forced two reactors shut. As in Japan, the industry loudly warns of shortages when summer hits. It wants at least one reactor back by June. But experts warn that San Onofre’s design deficiencies threaten the public safety, as does its uninsured vulnerability to earthquakes and tsunamis.

But Progress Energy’s guess that its own double-reactor proposal for Florida’s Levy County could cost a staggering $24 billion casts a long shadow over Vogtle, where tax/ratepayers are already being stuck with huge bills for a project that could be vastly underfunded. A national petition drive has been fired up to stop the guarantees from going through.

And while India’s growing nonviolent army of nuclear opponents vow to fast to the death, the global reactor industry awaits word from China on how many new reactors it thinks it will build. The world will then watch with bated breath as the Middle Kingdom’s own nascent anti-nuclear movement gathers strength in the inevitable race to shut the local reactor before it melts.

But for now, this weekend’s message from Japan and France could not be more clear: at nuclear power’s historic core, the collapse has come. Humankind is running ever-faster toward a green-powered Earth, desperate to win before the next Fukushima strikes.