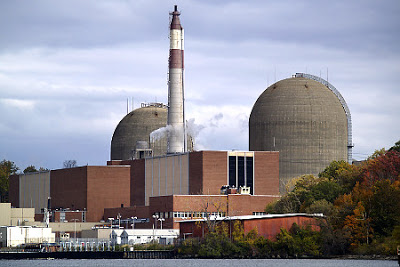 At the end of John Huston’s 1948 classic Treasure of Sierra Madre, armed bandits tell Humphrey Bogart they are federal agents.

Bogie demands to see their badges.

“Badges?” says their leader. “We ain’t got no badges. We don’t need any badges. I don’t have to show you no stinking badges.”

The ill will comes as Japan confirms that three reactors at Fukushima did melt, and that radiation emissions have been far higher than originally believed.

Japan has raised “acceptable” doses for school children and workers. Radiation levels within Unit One have risen, along with a call for elderly citizens to fill dangerous slots at the reactor.

In the U.S., California’s Alliance for Nuclear Responsibility has won a decision by the NRC’s Atomic Safety and Licensing Board, postponing by 52 months a decision on relicensing reactors at Diablo Canyon.

The rare triumph has not applied to Indian Point, which the NRC has allowed to operate with a wide range of fire protection exemptions.

In 2006 it told Entergy to justify why it should keep operating without meeting fire protection standards.

Three years later Entergy submitted a plan which is still pending. Meanwhile Entergy seeks a 20-year extension of operating licenses due to expire in 2013 and 2015.

Schneiderman says “for years the NRC has looked the other way as Indian Point ignores the most basic safety stands… With nearly 20 million people living and working within 50 miles… that’s a risk we simply cannot afford.”

Fred Dacimo, vice president of operations at Indian Point, says much of the facility is open space, made of concrete and steel that can’t burn, or is near zones with fire suppression equipment.

But “it’s hard to explain that to John Q. Public,” Dacimo complains.

Or: We don’t have to show you no stinking fire protection.

“The Nuclear Regulatory Commission has been unable to take ANY meaningful enforcement action against this industry on repeated violations of fire protection law,” says Paul Gunter of Beyond Nuclear. “They tried. They can’t — or WON’T — do it.”

After six years of staff meetings with industry violators, the NRC in 1998 issued 17 fire protection orders for 24 reactors. Overall, says Gunger, 89 of America’s 104 licensed reactors have Thermo-Lag, a “fire protection” material that’s flammable and in tests has failed to protect electrical circuits vital to shutting down and cooling the reactors in the event of serious fire, as claimed.

But the nuclear industry simply “thumbed their nose at the agency, and submitted unauthorized and unanalyzed programs that in fact allow these critical electrical circuits to burn up.” For many reactors the plan in case of fire, says Gunter, is now to “send some guy running through the plant to manually operate shutdown equipment that the NRC had ordered to protect circuit integrity and to assure control room operation.”

Since the workers will likely encounter smoke, fire, or intense radiation, he adds, the plan is “potentially a suicide mission.”

Rather than meet fire code, the industry staged “a mass civil disobedience.” The NRC, says Gunter, did a “complete retreat” and gave industry “enforcement discretion… There has been no meaningful regulatory control of critical fire protection issues.” Things are “as bad as they were in 1992.”

So U.S. reactors are now riddled at thousands of key junctures with “fire protection” materials that burn while leaving a dangerous char that hampers fire fighters. Since federal law restricts their liability, reactor owners would pay a bare fraction of the damages from such a fire’s catastrophic fallout. A new NRC inspection has added possible earthquake dangers to the mix.

To prolong the misery, reactor owners want $36 billion in federal loan guarantees, now being opposed by a major grassroots movement you can help. Treasure of Sierra Madre ends with Bogie murdered by those fake “federales” who never did show him their “stinking badges.”

America’s toothless regulators have given reactor owners no reason to shore up their “stinking fire protection.”

So if an American Fukushima bankrupts our nation and destroys your family, reactor owners like Entergy could ride off as scot-free as those badgeless bandidos that killed Bogie.

[Harvey Wasserman edits the NukeFree.org website. His most recent book is Solartopia! Our Green-Powered Earth. Read more of Harvey Wasserman’s writing on The Rag Blog.]

This entry was posted in Rag Bloggers and tagged Harvey Wasserman, Nuclear Power. Bookmark the permalink.