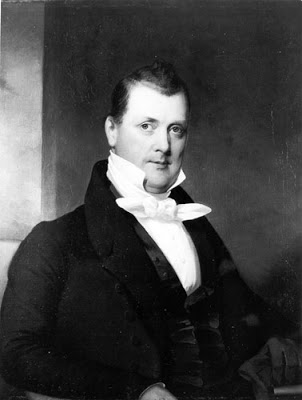 As “conservatives” scream and yell about gays in the military, they might remember that in all likelihood we have already had a gay Commander-in-Chief.

His name was James Buchanan. He was the 15th President of the United States.

A Democrat from Pennsylvania, Buchanan is discreetly referred to in official texts as “our only bachelor president.”

In fact, many historians believe that he may well have been “married” to William Rufus King, a pro-slavery Democrat from Alabama who was our only bachelor Vice President.

The two men lived together for years. Andrew Jackson, never one to shy from bullhorn bigotry, was among those who variously referred to them as “Aunt Nancy” and “Mr. Fancy.” Other Washington wags called them “Mr. and Mrs. Buchanan,” and the like.

The nature of their relationship was never officially confirmed or proclaimed in public. They were widely referred to as “Siamese twins,” slang at the time for a gay couple. But there was no incriminating gap dress or heartfelt double-ring ceremony, civil or otherwise. It was not uncommon at the time for men and women of the same gender to live together and even share a bed while remaining sexually uninvolved.

Buchanan was once engaged to marry a wealthy young woman named Ann Coleman. But the complex affair ended with her mysterious, untimely death. When King became ambassador to France in 1844, Buchanan complained that “I have gone wooing to several gentlemen, but have not succeeded with any of them.”

With no Moral Majority or Bible thumping fundamentalists to plague them, the King-Buchanan liaison was generally embraced as a political and personal fact of life in a nation consumed with real issues of life and death, freedom and slavery.

In 1852 King was elected as Franklin Pierce’s Vice President. But on an official mission, King contracted a fever and died, leaving Buchanan alone and deeply distraught.

In 1856, Buchanan defeated John C. Fremont, the first presidential candidate from the new Republican Party. Buchanan did not run for reelection in 1860, when Abraham Lincoln was the victor.

Buchanan’s presidency was plagued by economic and sectional disaster. He was a “doughface” northerner with sympathies for southern slavery. Devoted to consensus and compromise, he was swept away by the intense polarization that led to Civil War.

Through his entire time in the White House, President Buchanan lived alone. His niece served as “First Lady.” He stayed unmarried, and had his personal letters burned upon his death, prompting further speculation on his sexual orientation.

Maybe it’s time those legislators who have been so fiercely opposed to gays in the military face the high likelihood that at least one Commander in Chief would probably be among them.

[Harvey Wasserman’s History of the United States S is at www.harveywasserman.com, along with Passions of the Potsmoking Patriots “Thomas Paine,” which portrays George Washington as a gay potsmoker.]