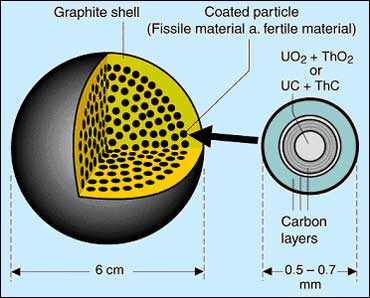 As the “reactor renaissance” desperately demands new billions from a lame duck Congress, one of its shining stars has dropped dead. Other much-hyped “new generation” plans may soon die with it.

The Pebble Bed’s big idea was to create a critical mass of uranium particles coated with silicon carbide and encased in graphite. These intensely radioactive “pebbles” would seethe in a passive container, cooled by helium. Without the need for a containment dome, the super-heated mass would produce both heat and electricity. Touted as needing no back-up emergency systems to prevent a major disaster, the plan was to mass-produce these “smaller, simpler” reactors for use throughout the industrial world.

Pebble Bed technology originated in Germany. But it was adopted and developed by the government of South Africa. For some it was a source of pride that a “developing” nation had become a significant player in the so-called nuclear renaissance.

But the South African government has now cut off funding for the project. Public Enterprises Minister Barbara Hogan has told the National Assembly that “sobering realities” included the lack of a working demonstration model, the lack of customers, the lack of a major investment partner, and the impending demand for $4.2 billion in new investment capital. As deadlines consistently slipped, Westinghouse withdrew from the project in May.

South African officials say the U.S. and China are still working on the technology. But economic realities make any tangible future Pebble Bed as a major source of new energy largely imaginary. Critics also worry that without a containment dome, the pebble beds would be vulnerable to small groups of terrorists with simple shell-lobbing mortars. And that critical metal components would not perform as needed under the intense stresses of heat and radiation.

The death of the Pebble Bed has considerable significance. For nearly two decades reactor backers have counted it in the imaginary fleet of new generation reactors coming to save us. Its alleged bright future would make it just one of the many new nuclear technologies that would render solar and wind energy unnecessary.

This anti-green arsenal has also included fast breeder reactors, which would magically create new fuel from used fuel. Canada’s heavy water CanDu. Thorium reactors, which would burn a radioactive element other than uranium. Fusion reactors, which would mimic the gargantuan power of the sun. The AP 1000, new from Westinghouse. The European (or Evolutionary) Power Reactor, new from France’s Areva. And a whole fleet of “Fourth Generation” designs which are unproven and often wildly impractical.

Like older proposed projects such as nuclear-powered aircraft, homes built of uranium, and nuclear-tipped anti-ballistic missiles, all have run afoul of reality. None offer a realistic solution to the problems of waste or terrorism, not to mention cost, heat emissions, and greenhouse gas production in all but the fission/fusion portion of the process. The first big breeder, Fermi I, nearly exploded in Monroe, Michigan, in 1966, threatening to irradiate the entire Great Lakes region. Today’s models are extremely dangerous, dirty, and have been widely rejected outside France and Japan, where they barely operate.

Canada has been unable to find buyers for its CanDu design, and has put its own Atomic Energy of Canada, Ltd., up for sale. Thorium reactors are unproven, with no prototypes. Fusion reactors are periodically hyped and always “20 years away.” The AP1000 and EPR face major regulatory, safety and financial hurdles.

Meanwhile a “Fourth Generation” of proposed reactors is theoretical and all over the map. As Michael Mariotte of the Nuclear Information & Resource Service puts it: “The Pebble Bed has failed for the same reason all the other new reactor designs ultimately will fail: they are too expensive compared to the competition. Renewables and energy efficiency are cheap and getting cheaper; nuclear is expensive and getting more so.”

Sensing an unending march of hotly hyped but feeble headed new design failures, the U.S. industry is now pushing hard to get its aging fleet — originally designed to operate 30 to 40 years — licensed to run for 60 to 80 years. But not one of 104 U.S. reactors has a containment dome designed to withstand a serious jet crash. Reactor builders now say they’ll put stronger domes on the new models, but prefer not to discuss cost or logistical realities.

The Pebble Bed’s backers could not find private investors, and the South African government finally got tired of footing the bill. If/when that happens here — and the sooner the better — the Solartopian technologies of true green power and efficiency will finally get their day.

Then the “too cheap to meter” six-decade Peaceful Atom fantasy, with its fast breeding corps of failed new designs, can take its final rest in the very dead pebble bed.